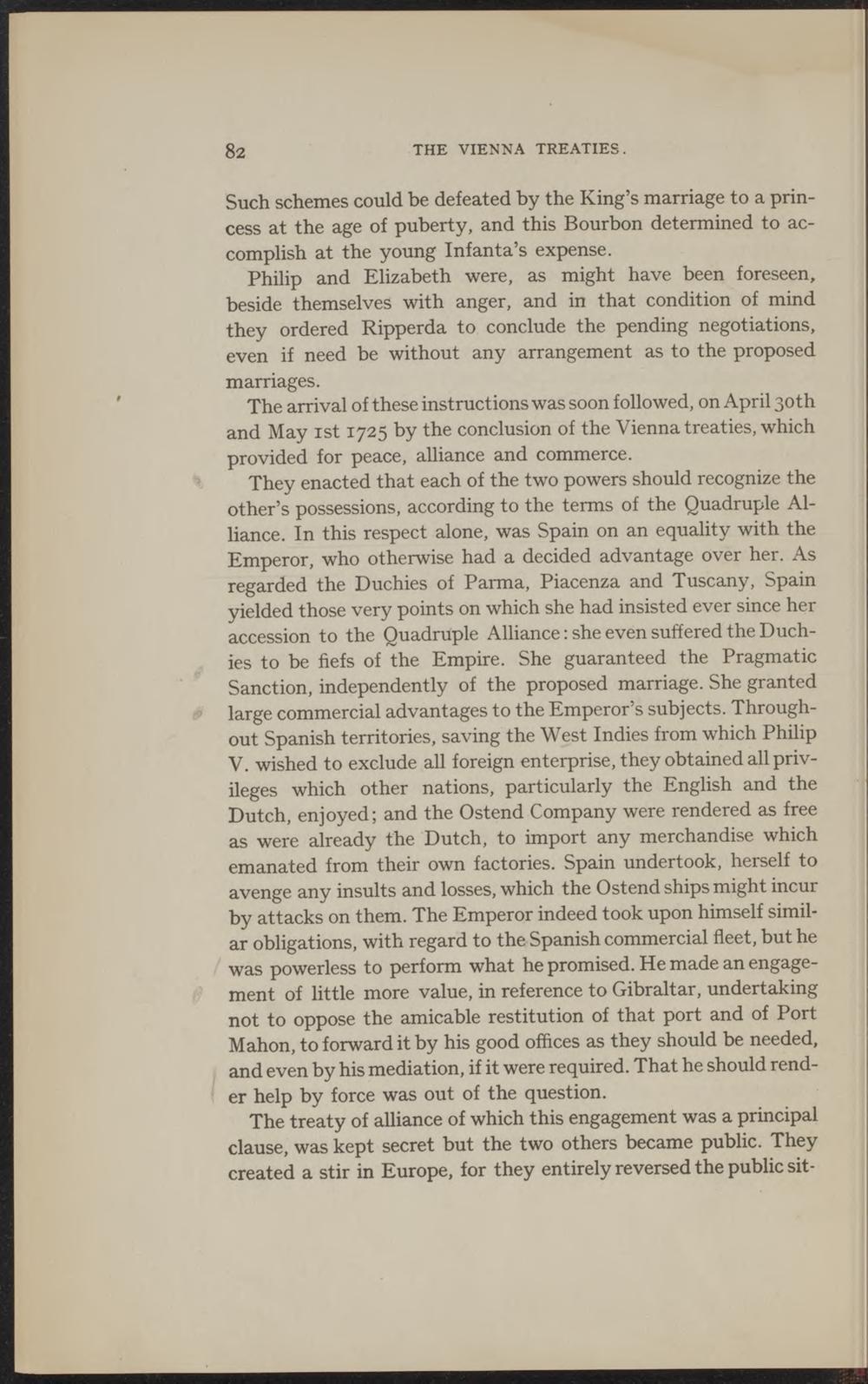 Such schemes could be defeated by the King's marriage to a princess at the age of puberty, and this Bourbon determined to accompüsh at the young Infanta's expense.

Philip and Elizabeth were, as might have been foreseen, beside themselves with anger, and in that condition of mind they ordered Ripperda to conclude the pending negotiations, even if need be without any arrangement as to the proposed marriages.

The arrival of these instructions was soon f ollowed, on April 3oth and May ist 1725 by the conclusion of the Vienna treaties, which provided for peace, alliance and commerce.

They enacted that each of the two powers should recognize the other's possessions, according to the terms of the Quadruple Alliance. In this respect alone, was Spain on an equality with the Emperor, who otherwise had a decided advantage over her. As regarded the Duchies of Parma, Piacenza and Tuscany, Spain yielded those very points on which she had insisted ever since her accession to the Quadruple Alliance: she even suffered the Duchies to be fiets of the Empire. She guaranteed the Pragmatic Sanction, independently of the proposed marriage. She granted large commercial advantages to the Emperor's subjects. Throughout Spanish territories, saving the West Indies from which Philip V. wished to exclude all foreign enterprise, they obtained all privileges which other nations, particularly the English and the Dutch, enjoyed; and the Ostend Company were rendered as free as were already the Dutch, to import any merchandise which emanated from their own factories. Spain undertook, herself to avenge any insults and losses, which the Ostend ships might incur by attacks on them. The Emperor indeed took upon himself similar obligations, with regard to the-Spanish commercial fleet, but he was powerless to perform what he promised. He made an engagement of little more value, in reference to Gibraltar, undertaking not to oppose the amicable restitution of that port and of Port Mahon, to f orward it by his good offices as they should be needed, and even by his mediation, if it were required. That he should render help by force was out of the question.

The treaty of alliance of which this engagement was a principal clause, was kept secret but the two others became public. They created a stir in Europe, for they entirelyreversed the public sit-