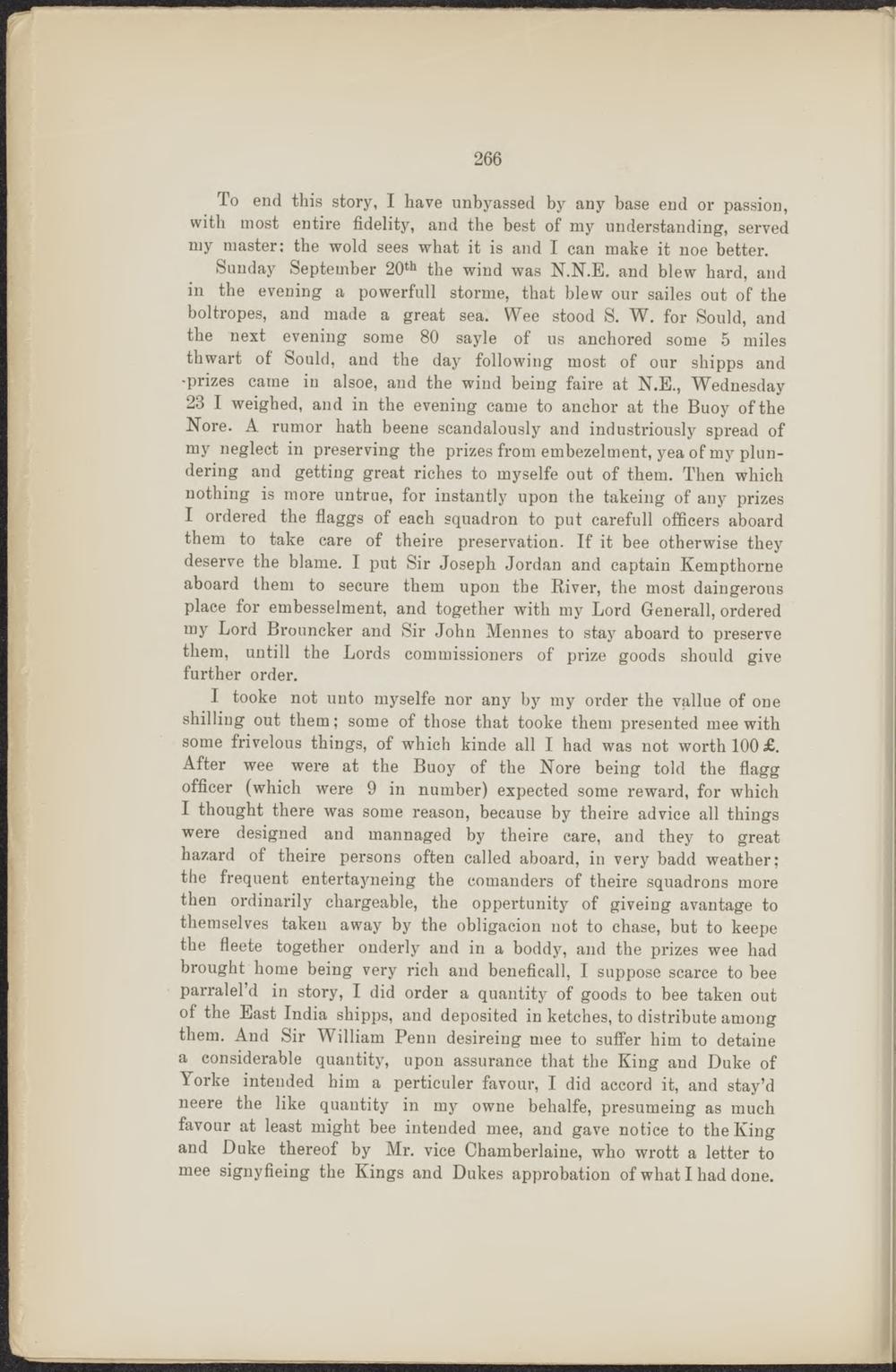 To end this story, I have unbyassed by any base end or passion, with most entire fidelity, and the best of my understanding, served my master: the wold sees what it is and I can make it noe better.

Sunday September 20» the wind was N.N.E. and blew hard, and in the evening a powerfull storme, that blew our sailes out of the boltropes, and made a great sea. Wee stood S. W. for Sould, and the next evening some 80 sayle of us anchored some 5 miles thwart of Sould, and the day following most of our shipps and •prizes came in alsoe, and the wind being faire at N.E., Wednesday 23 I weighed, and in the evening came to anchor at the Buoy of the Nore. A rumor hath beene scandalously and industriously spread of my neglect in preserving the prizes from embezelment, yea of my plundering and getting great riches to myselfe out of them. Then which nothing is more untrue, for instantly upon the takeing of any prizes I ordered the flaggs of each squadron to put carefull officers aboard them to take care of theire preservation. If it bee otherwise they deserve the blame. I put Sir Joseph Jordan and captain Kempthorne aboard them to secure them upon the Biver, the most daingerous place for embesselment, and together with my Lord Generall, ordered my Lord Brouncker and Sir John Mennes to stay aboard to preserve them, untill the Lords commissioners of prize goods should give further order.

I tooke not unto myselfe nor any by my order the vallue of one shilling out them; some of those that tooke them presented mee with some frivelous things, of which kinde all I had was not worth 100 £. After wee were at the Buoy of the Nore being told the flagg officer (which were 9 in number) expected some reward, for which I thought there was some reason, because by theire advice all things were designed and mannaged by theire care, and they to great hazard of theire persons often called aboard, in very badd weather; the frequent entertayneing the comanders of theire squadrons more then ordinarily chargeable, the oppertunity of giveing avantage to themselves taken away by the obligacion not to chase, but to keepe the fleete together onderly and in a boddy, and the prizes wee had brought home being very rich and beneficall, I suppose scarce to bee parralel'd in story, I did order a quantity of goods to bee taken out of the East India shipps, and deposited in ketches, to distribute among them. And Sir William Penn desireing mee to suffer him to detaine a considerable quantity, upon assurance that the King and Duke of Torke intended him a perticuler favour, I did accord it, and stay'd neere the like quantity in my owne behalfe, presumeing as much favour at least might bee intended mee, and gave notice to the King and Duke thereof by Mr. vice Chamberlaine, who wrott a letter to mee signyfieing the Kings and Dukes approbation of what I had done.