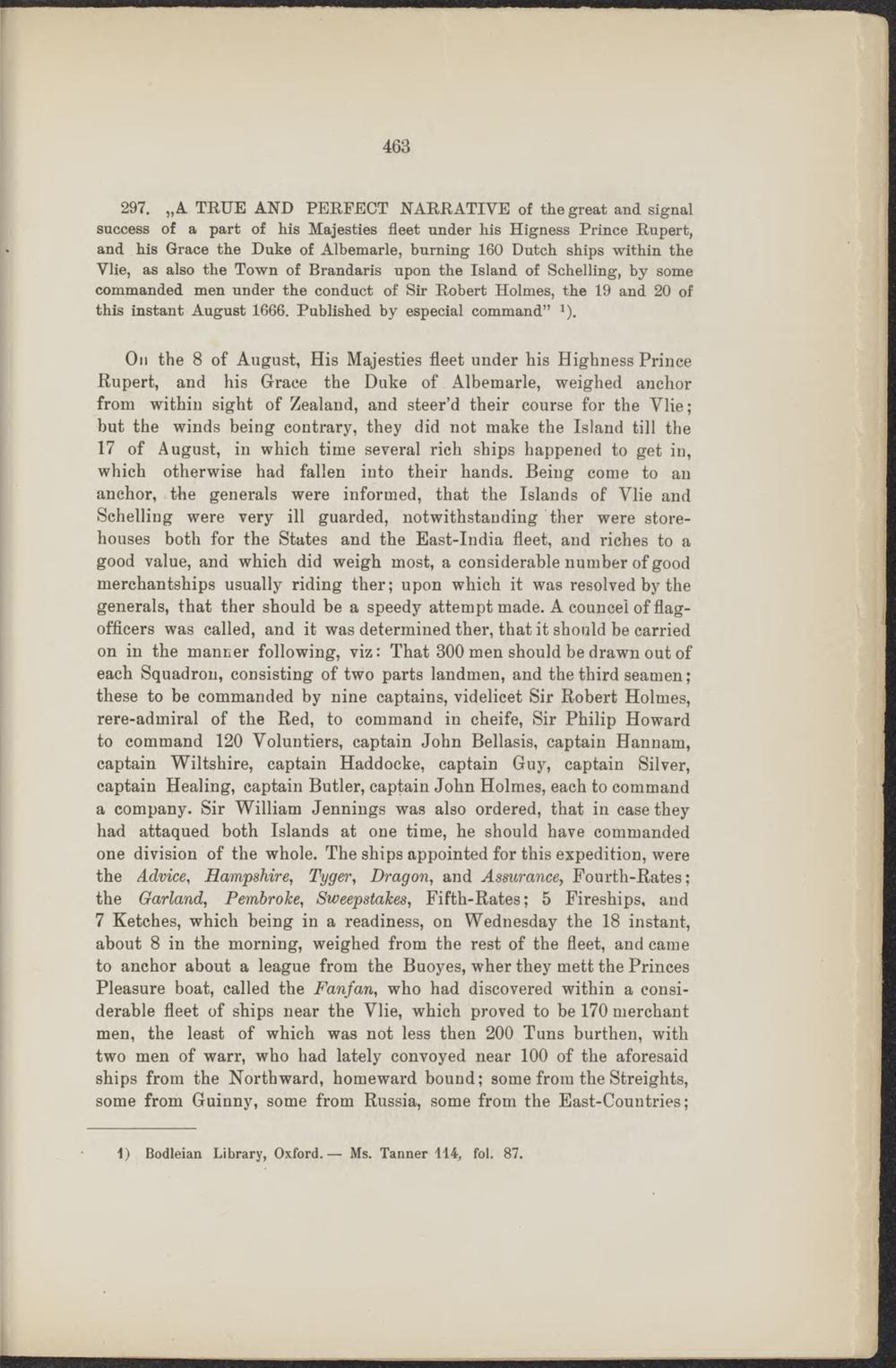 297. „A TRUE AND PERFECT NARRATIVE of the great and signal success of a part of his Majesties fleet nnder his Higness Prince Rupert, and his Grace the Duke of Albemarle, burning 160 Dutch ships within the Vlie, as also the Town of Brandaris upon the Island of Schelling, by some commanded men under the conduct of Sir Robert Holmes, the 19 and 20 of this instant August 1666. Published by especial command" *).

Ou the 8 of August, His Majesties fleet under his Highness Prince Rupert, and his Grace the Duke of Albemarle, weighed anchor from within sight of Zealand, and steer'd their course for the Ylie; but the winds being contrary, they did not make the Island till the 17 of August, in which time several rich ships happened to get in, which otherwise had fallen into their hands. Being come to an anchor, the generals were informed, that the Islands of Vlie and Schelling were very ill guarded, notwithstanding 'ther were storehouses both for the States and the East-India fleet, and riches to a good value, and which did weigh most, a considerable number of good merchantships usually riding ther; upon which it was resolved by the generals, that ther should be a speedy attempt made. A councei of flagofficers was called, and it was determined ther, that it should be carried on in the manner following, viz: That 300 men should be drawn out of each Squadron, consisting of two parts landmen, and the third seamen; these to be commanded by nine captains, videlicet Sir Robert Holmes, rere-admiral of the Red, to command in cheife, Sir Philip Howard to command 120 Voluntiers, captain John Bellasis, captain Hannam, captain Wiltshire, captain Haddocke, captain Guy, captain Silver, captain Healing, captain Butler, captain John Holmes, each to command a company. Sir William Jennings was also ordered, that in case they had attaqued both Islands at one time, he should have commanded one division of the whole. The ships appointed for this expedition, were the Advice, Hampshire, Tyger, Dragon, and Assurance, Fourth-Rates; the Garland, Pembroke, Sweepstahes, Fifth-Rates; 5 Fireships, and 7 Ketches, which being in a readiness, on Wednesday the 18 instant, about 8 in the morning, weighed from the rest of the fleet, and came to anchor about a league from the Buoyes, wher they mett the Princes Pleasure boat, called the Fanfan, who had discovered within a considerable fleet of ships near the Vlie, which proved to be 170 merchant men, the least of which was not less then 200 Tuns burthen, with two men of warr, who had lately convoyed near 100 of the aforesaid ships from the Northward, homeward bound; some from the Streights, some from Guinny, some from Russia, some from the East-Countries;