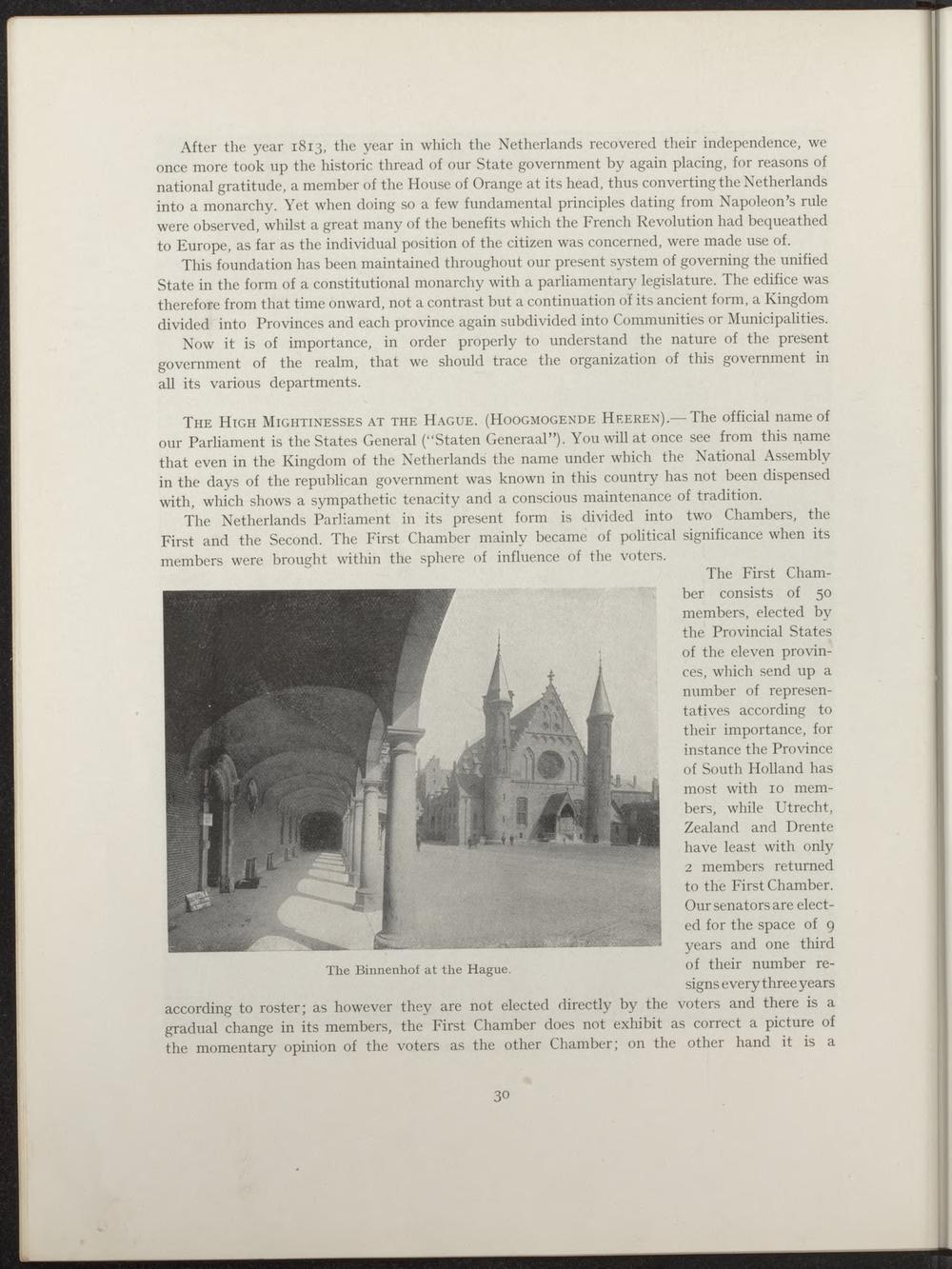 After the year 1813, the year in which the Netherlands recovered their independence, we once more took up the historie thread of our State government by again placing, for reasons of national gratitude, a member of the House of Orange at its head, thus converting the Netherlands into a monarchy. Yet when doing so a few fundamental principles dating from Napoleon's rule were observed, whilst a great many of the benefits which the French Revolution had bequeathed to Europe, as far as the individual position of the citizen was concerned, were made use of.

This foundation has been maintained throughout our present system of governing the unified State in the form of a constitutional monarchy with a parliamentary legislature. The edifice was therefote from that time onward, not a contrast but a continuation of its ancient form, a Kingdom divided into Provinces and each province again subdivided into Communities or Municipalities.

Now it is of importance, in order properly to understand the nature of the present government of the realm, that we should tracé the organization of this government in all its various departments.

The High Mightinesses at the Hague. (Hoogmogende Heeren).—The official name of our Parliament is the States General ("Staten Generaal"). You will at once see from this name that even in the Kingdom of the Netherlands the name under which the National Assembly in the days of the republican government was known in this country has not been dispensed with, which shows a sympathetic tenacity and a conscious maintenance of tradition.

The Netherlands Parliament in its present form is divided into two Chambers, the First and the Second. The First Chamber mainly became of political significance when its members were brought within the sphere of influence of the voters.

according to roster; as however they are not elected directly by the voters and there is a gradual change in its members, the First Chamber does not exhibit as correct a picture of the momentary opinion of the voters as the other Chamber; on the other hand it is a

The Binnenhof at the Hague.

The First Chamber consists of 50 members, elected by the Provincial States of the eleven provinces, which send up a number of representatives according to their importance, for instance the Province of South Holland has most with 10 members, while Utrecht, Zealand and Drente have least with only 2 members returned to the First Chamber. Our senators are elected for the space of 9 years and one third of their number resigns every three years