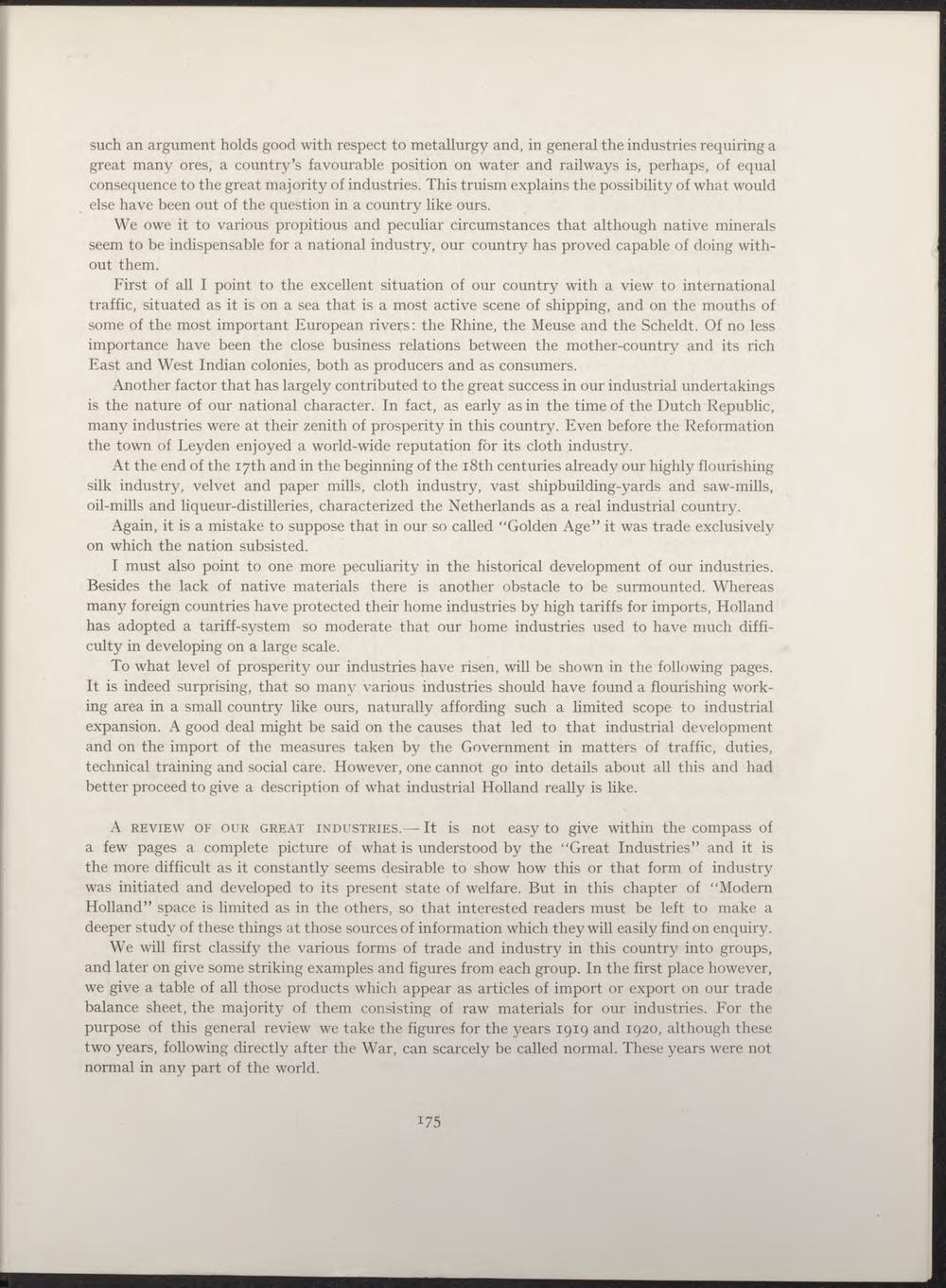 such au argument holds good with respect to metallurgy and, in general the industries requiring a great many ores, a country's favourable position on water and railways is, perhaps, of equal consequence to the great majority of industries. This truism explains the possibility of what would else have been out of the question in a country hke ours.

We owe it to various propitious and peculiar circumstances that although native minerals seem to be indispensable for a national industry, our country has proved capable of doing without them.

First of all I point to the excellent situation of our country with a view to international traffic, situated as it is on a sea that is a most active scène of shipping, and on the mouths of some of the most important European rivers: the Rhine, the Meuse and the Scheldt. Of no less importance have been the close business relations between the mother-country and its rich East and West Indian colonies, both as producers and as consumers.

Another factor that has largely contributed to the great success in our industrial undertakings is the nature of our national character. In fact, as early as in the time of the Dutch Republic, many industries were at their zenith of prosperity in this country. Even before the Reformation the town of Leyden enjoyed a world-wide reputation fbr its cloth industry.

At the end of the iyth and in the beginning of the i8th centuries already our highly flourishing silk industry, velvet and paper mills, cloth industry, vast shipbuüding-yards and saw-mills, oil-mills and hqueur-distüleries, characterized the Netherlands as a real industrial country.

Again, it is a mistake to suppose that in our so called "Golden Age" it was trade exclusively on which the nation subsisted.

I must also point to one more pecuharity in the historical deveiopment of our industries. Besides the lack of native materials there is another obstacle to be surmounted. Whereas many foreign countries have protected their home industries by high tariffs for imports, Holland has adopted a tariff-system so moderate that our home industries used to have much difficulty in developing on a large scale.

To what level of prosperity our industries have risen, will be shown in the following pages. It is indeed surprising, that so many various industries should have found a flourishing working area in a small country hke ours, naturally affording such a hmited scope to industrial expansion. A good deal might be said on the causes that led to that industrial deveiopment and on the import of the measures taken by the Government in matters of traffic, duties, technical training and social care. However, one cannot go into details about all this and had better proceed to give a description of what industrial Holland really is hke.

A review of our great industries.— It is not easy to give within the compass of a few pages a complete picture of what is understood by the "Great Industries" and it is the more difficult as it constantly seems desirable to show how this or that form of industry was initiated and developed to its present state of welfare. But in this chapter of "Modern Holland" space is hmited as in the others, so that interested readers must be left to make a deeper study of these things at those sources of information which they will easily find on enquiry.

We will first classify the various forms of trade and industry in this country into groups, and later on give some striking examples and figures from each group. In the first place however, we give a table of all those products which appear as articles of import or export on our trade balance sheet, the majority of them consisting of raw materials for our industries. For the purpose of this general review we take the figures for the years 1919 and 1920, although these two years, following directly after the War, can scarcely be called normal. These years were not normal in any part of the world.