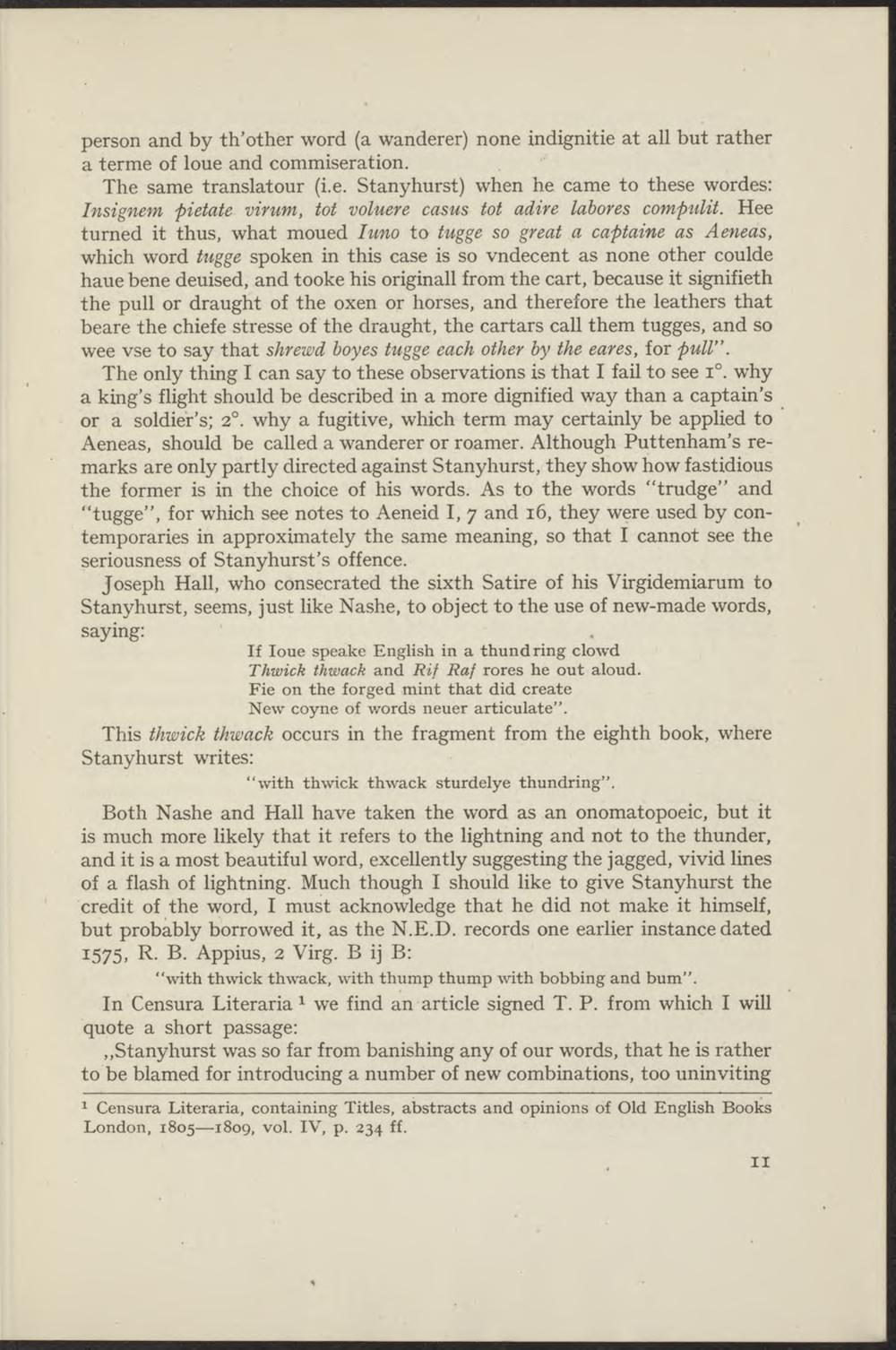 person and by th'other word (a wanderer) none indignitie at all but rather a terme of loue and commiseration.

The same translatour (i.e. Stanyhurst) when he came to these wordes: Insignem pietate virum, tot voluere casus tot adire labores compulit. Hee turned it thus, what moued Iuno to tugge so great a captaine as Aeneas, which word tugge spoken in this case is so vndecent as none other coulde haue bene deuised, and tooke his originall from the cart, because it signifieth the pull or draught of the oxen or horses, and therefore the leathers that beare the chiefe stresse of the draught, the cartars call them tugges, and so wee vse to say that shrewd boy es tugge each other by the eares, for pull".

The only thing I can say to these observations is that I fail to see i°. why a king's flight should be described in a more dignified way than a captain's or a soldieir's; 2°. why a fugitive, which term may certainly be applied to Aeneas, should be called a wanderer or roamer. Although Puttenham's remarks are only partly directed against Stanyhurst, they show how fastidious the former is in the choice of his words. As to the words "trudge" and "tugge", for which see notes to Aeneid I, 7 and 16, they were used by contemporaries in approximately the same meaning, so that I cannot see the seriousness of Stanyhurst's offence.

Joseph Hall, who consecrated the sixth Satire of his Virgidemiarum to Stanyhurst, seems, just like Nashe, to object to the use of new-made words, saying:

If loue speake English in a thundring clowd Thwick thwack and Rif Raf rores he out aloud. Fie on the forged mint that did create New coyne of words neuer articulate".

This thwick thwack occurs in the fragment from the eighth book, where Stanyhurst writes:

Both Nashe and Hall have taken the word as an onomatopoeic, but it is much more likely that it refers to the lightning and not to the thunder, and it is a most beautiful word, excellently suggesting the jagged, vivid lines of a flash of lightning. Much though I should like to give Stanyhurst the credit of the word, I must acknowledge that he did not make it himself, but probably borrowed it, as the N.E.D. records one earlier instance dated 1575, R. B. Appius, 2 Virg. B ij B:

"with thwick thwack, with thump thump with bobbing and bum".

In Censura Literaria1 we find an article signed T. P. from which I will quote a short passage:

„Stanyhurst was so far from banishing any of our words, that he is rather to be blamed for introducing a number of new combinations, too uninviting