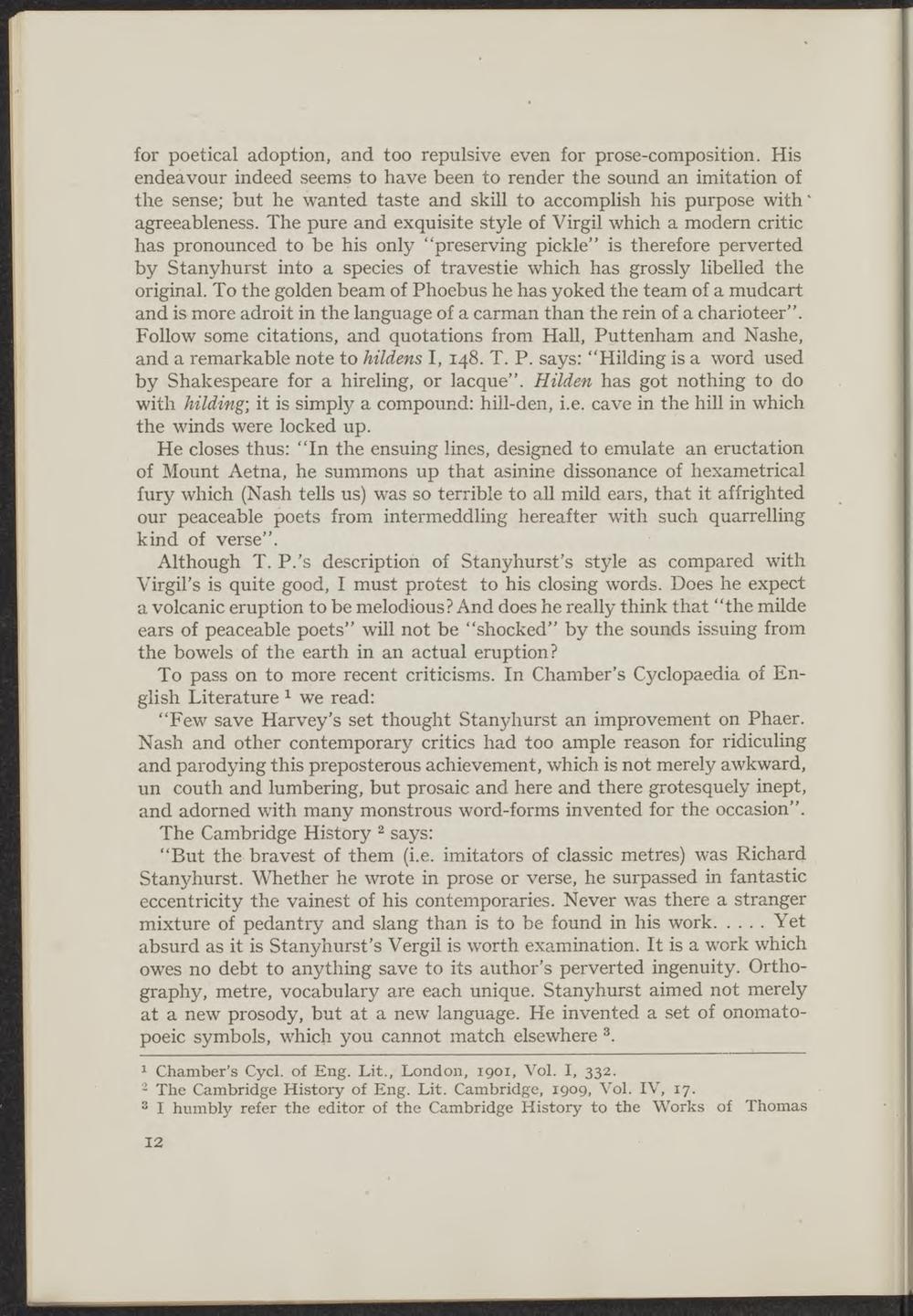 for poetical adoption, and too repulsive even for prose-composition. His endeavour indeed seems to have been to render the sound an imitation of the sense; but he wanted taste and skill to accomplish his purpose with* agreeableness. The pure and exquisite style of Virgil which a modern critic has pronounced to be his only "preserving pickle" is therefore perverted by Stanyhurst into a species of travestie which has grossly libelled the original. To the golden beam of Phoebus he has yoked the team of a mudcart and is more adroit in the language of a carman than the rein of a charioteer". Follow some citations, and quotations from Hall, Puttenham and Nashe, and a remarkable note to hildens 1,148. T. P. says: "Hilding is a word used by Shakespeare for a hireling, or lacque". Rilden has got nothing to do with hilding; it is simply a compound: hill-den, i.e. cave in the hill in which the winds were locked up.

He closes thus: "In the ensuing lines, designed to emulate an eructation of Mount Aetna, he summons up that asinine dissonance of hexametrical fury which (Nash tells us) was so terrible to all mild ears, that it affrighted our peaceable poets from intermeddling hereafter with such quarrelling kind of verse".

Although T. P.'s descriptioh of Stanyhurst's style as compared with Virgil's is quite good, I must protest to his closing words. Does he expect a volcanic eruption to be melodious? And does he really think that "the milde ears of peaceable poets" will not be "shocked" by the sounds issuing from the bowels of the earth in an actual eruption?

To pass on to more recent criticisms. In Chamber's Cyclopaedia of English Literature1 we read:

"Few save Harvey's set thought Stanyhurst an improvement on Phaer. Nash and other contemporary critics had too ample reason for ridiculing and parodying this preposterous achievement, which is not merely awkward, un couth and lumbering, but prosaic and here and there grotesquely inept, and adorned with many monstrous word-forms invented for the occasion".

"But the bravest of them (i.e. imitators of classic metres) was Richard Stanyhurst. Whether he wrote in prose or verse, he surpassed in fantastic eccentricity the vainest of his contemporaries. Never was there a stranger

absurd as it is Stanyhurst's Vergil is worth examination. It is a work which owes no debt to anything save to its author's perverted ingenuity. Orthography, metre, vocabulary are each unique. Stanyhurst aimed not merely at a new prosody, but at a new language. He invented a set of onomatopoeic symbols, which you cannot match elsewhere 3.