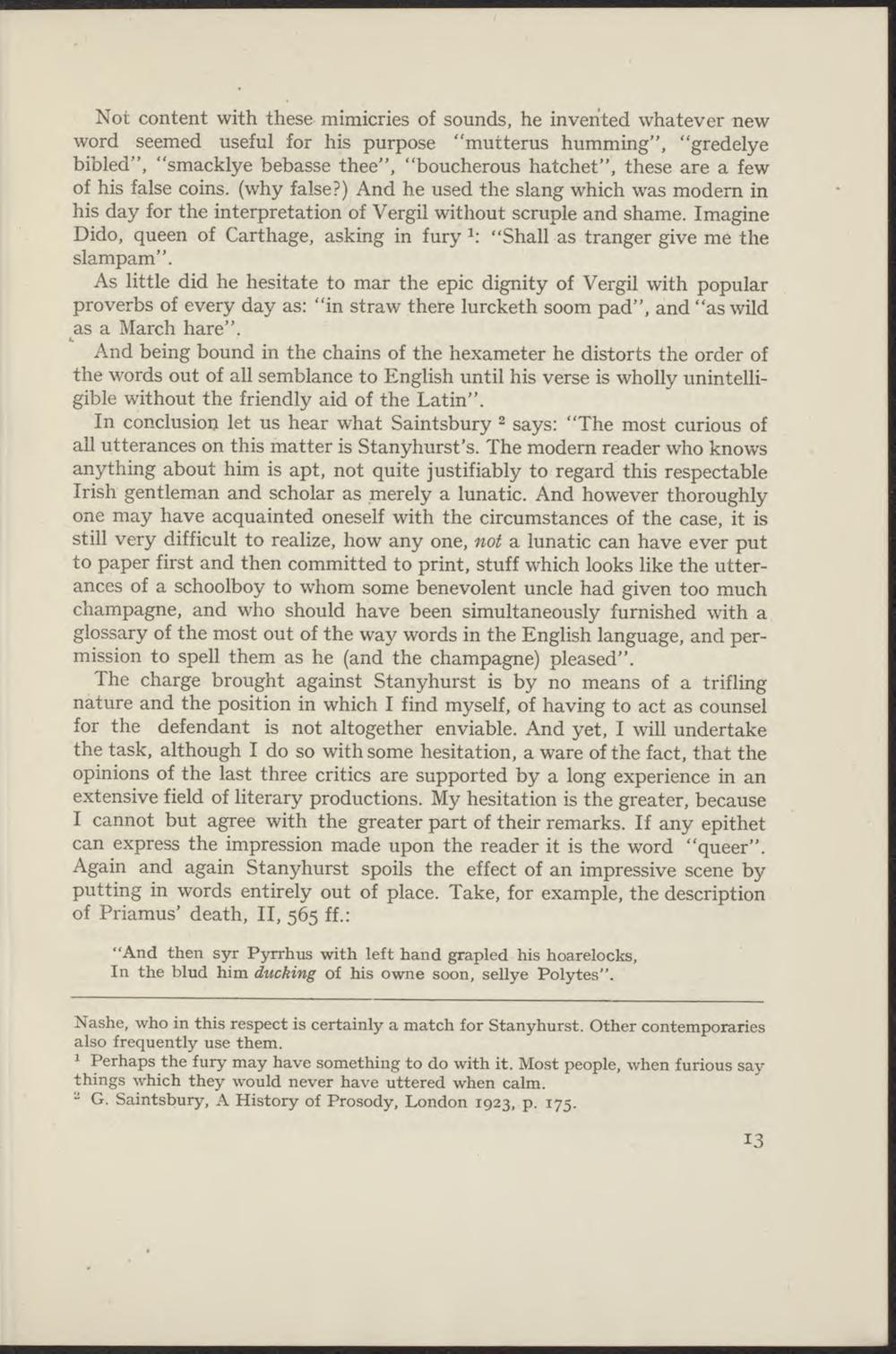 Not content with these mimicries of sounds, he invented whatever new word seemed useful for his purpose "mutterus humming", "gredelye bibled", "smacklye bebasse thee", "boucherous hatchet", these are a few of his false coins. (why false?) And he used the slang which was modern in his day for the interpretation of Vergil without scruple and shame. Imagine Dido, queen of Carthage, asking in fury M "Shall as tranger give mé the slampam".

As little did he hesitate to mar the epic dignity of Vergil with popular proverbs of every day as: "in straw there lurcketh soom pad", and "as wild as a March hare".

And being bound in the chains of the hexameter he distorts the order of the words out of all semblance to English until his verse is whoÜy unintelligible without the friendly aid of the Latin".

In cónclusion let us hear what Saintsbury 2 says: "The most curious of all utterances on this matter is Stanyhurst's. The modern reader who knows anything about him is apt, not quite justifiably to regard this respectable Irish gentleman and scholar as merely a lunatic. And however thoroughly one may have acquainted oneself with the circumstances of the case, it is still very difffcult to realize, how any one, not a lunatic can have ever put to paper first and then committed to print, stuff which looks hke the utterances of a schoolboy to whom some benevolent uncle had given too much champagne, and who should have been simultaneously furnished with a glossary of the most out of the way words in the English language, and permission to spell them as he (and the champagne) pleased".

The charge brought against Stanyhurst is by no means of a trifling nature and the position in which I find myself, of having to act as counsel for the defendant is not altogether enviable. And yet, I will undertake the task, although I do so with some hesitation, a ware of the fact, that the opinions of the last three critics are supported by a long experience in an extensive field of literary productions. My hesitation is the greater, because I cannot but agree with the greater part of their remarks. If any epithet can express the impression made upon the reader it is the word "queer". Again and again Stanyhurst spoils the effect of an impressive scène by putting in words entirely out of place. Take, for example, the description of Priamus' death, II, 565 ff.:

"And then syr Pyrrhus with left hand grapled bis hoarelocks, In the blud him ducking of his owne soon, sellye Polytes".

Nashe, who in this respect is certainly a match for Stanyhurst. Other contemporaries also frequently use them.

1 Perhaps the fury may have something to do with it. Most people, when furious say things which they would never have uttered when calm. 8 G. Saintsbury, A History of Prosody, London 1923, p. 175.