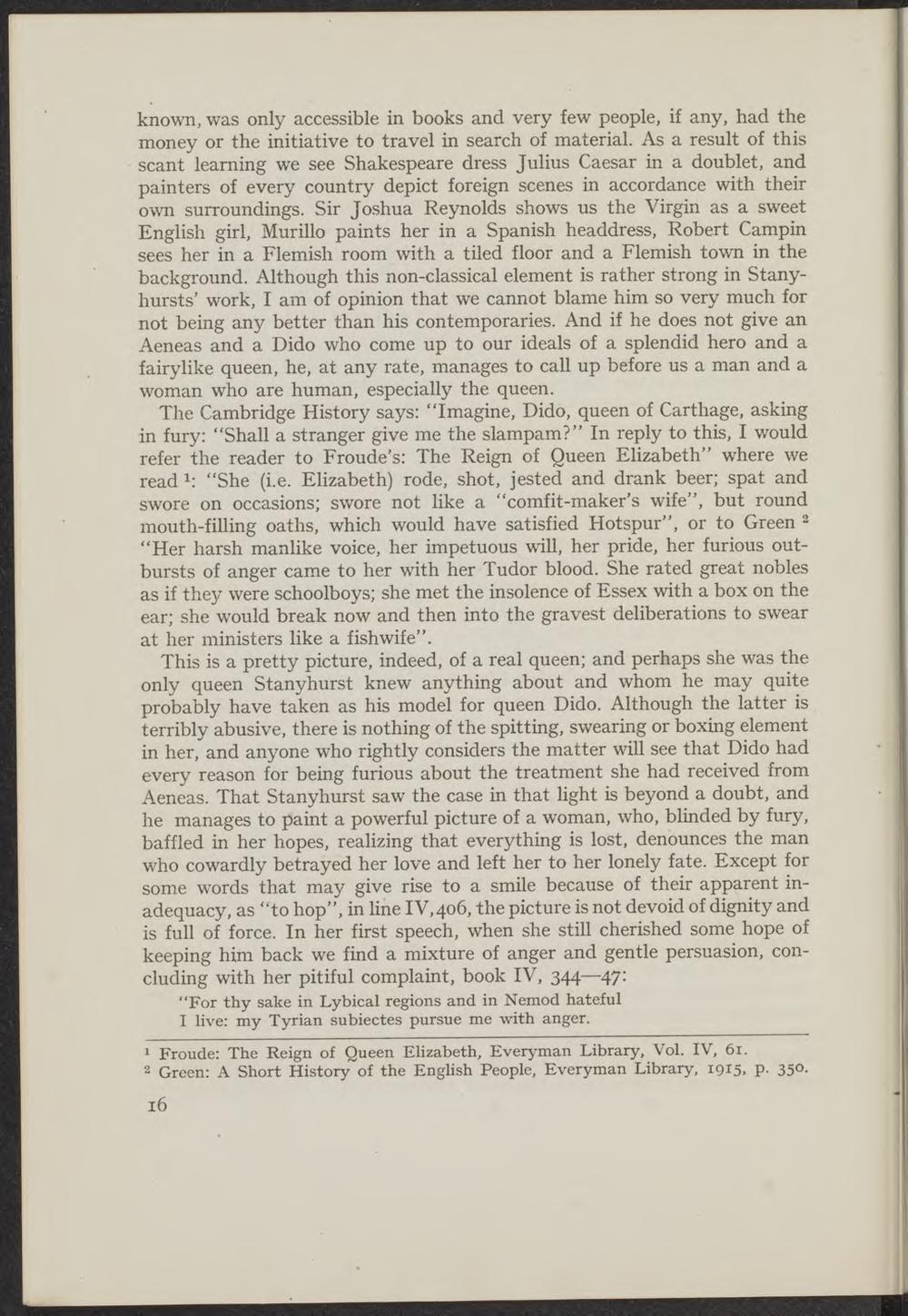 known, was only accessible in books and very few people, if any, had the money or the initiative to travel in search of material. As a result of this scant learning we see Shakespeare dress Julius Caesar in a doublet, and painters of every country depict foreign scènes in accordance with their own surroundings. Sir Joshua Reynolds shows us the Virgin as a sweet English girl, Murillo paints her in a Spanish headdress, Robert Campin sees her in a Flemish room with a tiled floor and a Flemish town in the background. Although this non-classical element is rather strong in Stanyhursts' work, I am of opinion that we cannot blame him so very much for not being any better than his contemporaries. And if he does not give an Aeneas and a Dido who come up to our ideals of a splendid hero and a fairylike queen, he, at any rate, manages to call up before us a man and a woman who are human, especially the queen.

The Cambridge History says: 'Tmagine, Dido, queen of Carthage, asking in fury: "Shall a stranger give me the slampam?" In reply to this, I would refer the reader to Froude's: The Reign of Queen Elizabeth" where we read l: "She (i.e. Elizabeth) rode, shot, jested and drank beer; spat and swore on occasions; swore not hke a "comfit-maker's wife", but round mouth-filling oaths, which would have satisfied Hotspur", or to Green 2 "Her harsh manlike voice, her impetuous will, her pride, her furious outbursts of anger came to her with her Tudor blood. She rated great nobles as if they were schoolboys; she met the insolence of Essex with a box on the ear; she would break now and then into the gravest deliberations to swear at her ministers hke a fishwife".

This is a pretty picture, indeed, of a real queen; and perhaps she was the only queen Stanyhurst knew anything about and whom he may quite probably have taken as his model for queen Dido. Although the latter is terribly abusive, there is nothing of the spitting, swearing or boxing element in her, and anyone who rightly considers the matter will see that Dido had every reason for being furious about the treatment she had received from Aeneas. That Stanyhurst saw the case in that light is beyond a doubt, and he manages to paint a powerful picture of a woman, who, blinded by fury, baffled in her hopes, realizing that everything is lost, denbunces the man who cowardly betrayed her love and left her to her lonely fate. Except for some words that may give rise to a smile because of their apparent inadequacy, as "to hop", in luie IV,4o6, the picture is not devoid of dignity and is full of force. In her first speech, when she still cherished some hope of keeping him back we find a mixture of anger and gentle persuasion, concluding with her pitiful complaint, book IV, 344—47:

"For thy sake in Lybical regions and in Nemod hateful