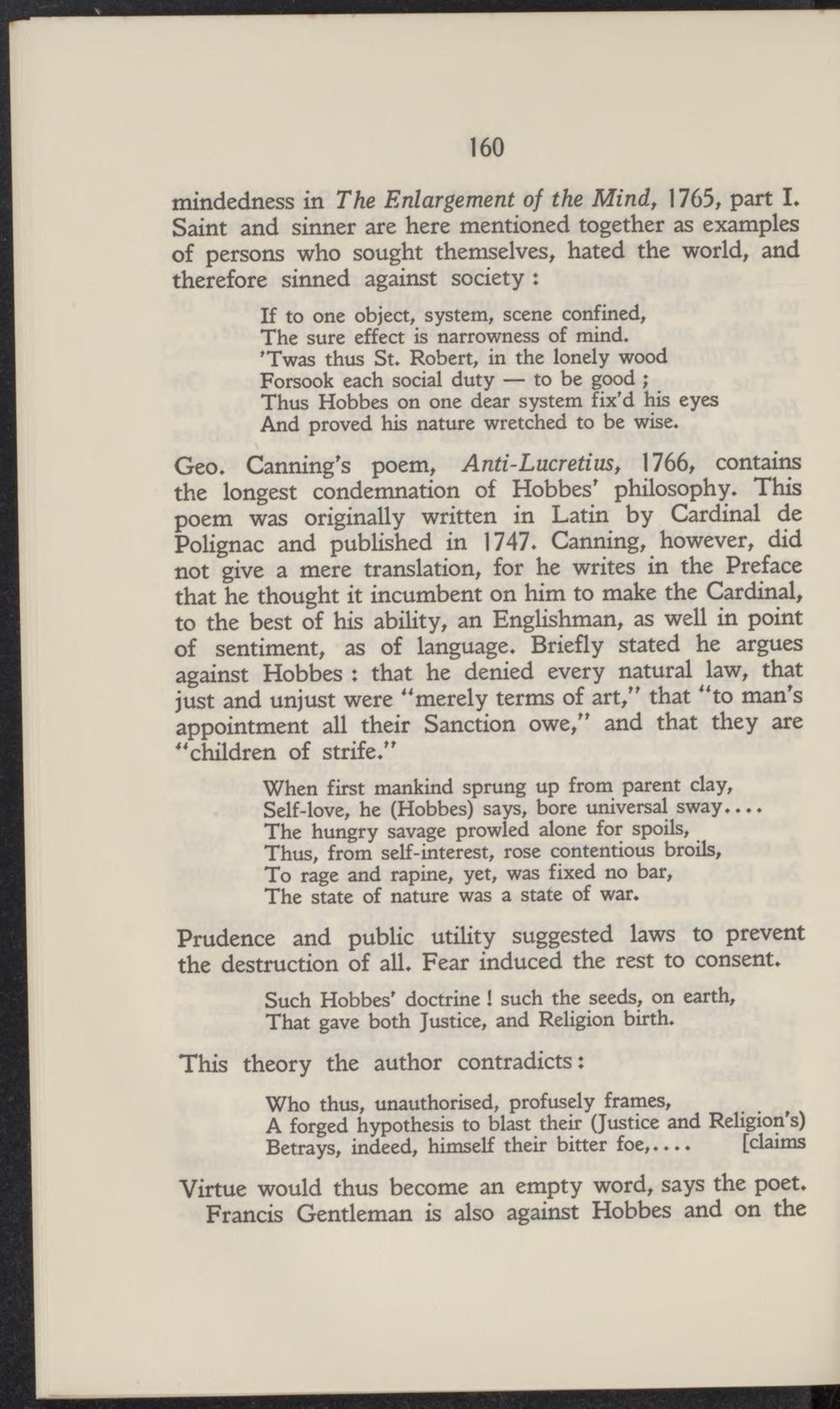 mindedness in The Enlargement of the Mind, 1765, part I. Saint and sinner are here mentioned together as examples of persons who sought themselves, hated the world, and therefore sinned against society :

If to one object, system, scène confined, The sure effect is narrowness of mind. 'Twas thus St. Robert, in the lonely wood Fors ook each social duty — to be good ; Thus Hobbes on one dear system fix'd his eyes And proved his nature wretched to be wise.

Geo. Canning's poem, Anti-Lucretius, 1766, contains the longest condemnation of Hobbes' phüosophy. This poem was originally written in Latin by Cardinal de Pohgnac and published in 1747. Canning, however, did not give a mere translation, for he writes in the Preface that he thought it incumbent on him to make the Cardinal, to the best of his ability, an Englishman, as well in point of sentiment, as of language. Briefly stated he argues against Hobbes : that he denied every natural law, that just and unjust were "merely terms of art," that "to man's appointment all their Sanction owe," and that they are "chüdren of strife."

When first mankind sprung up from parent day, Self-love, he (Hobbes) says, bóre universal sway.... The hungry savage prowled alone for spoils, Thus, from self-interest, rose contentious broils, To rage and rapine, yet, was fixed no bar, The state of nature was a state of war.

Prudence and pubhc utility suggested laws to prevent the destruction of all. Fear induced the rest to consent.

Such Hobbes' doctrine ! such the seeds, on earth, That gave both Justice, and Religion birth.

This theory the author contradicts:

Who thus, unauthorised, profusely frames, A forged hypothesis to blast their (Justice and Religion s) Betrays, indeed, himself their bitter toe,.... [claims

Virtue would thus become an empty word, says the poet. Francis Gentleman is also against Hobbes and on the