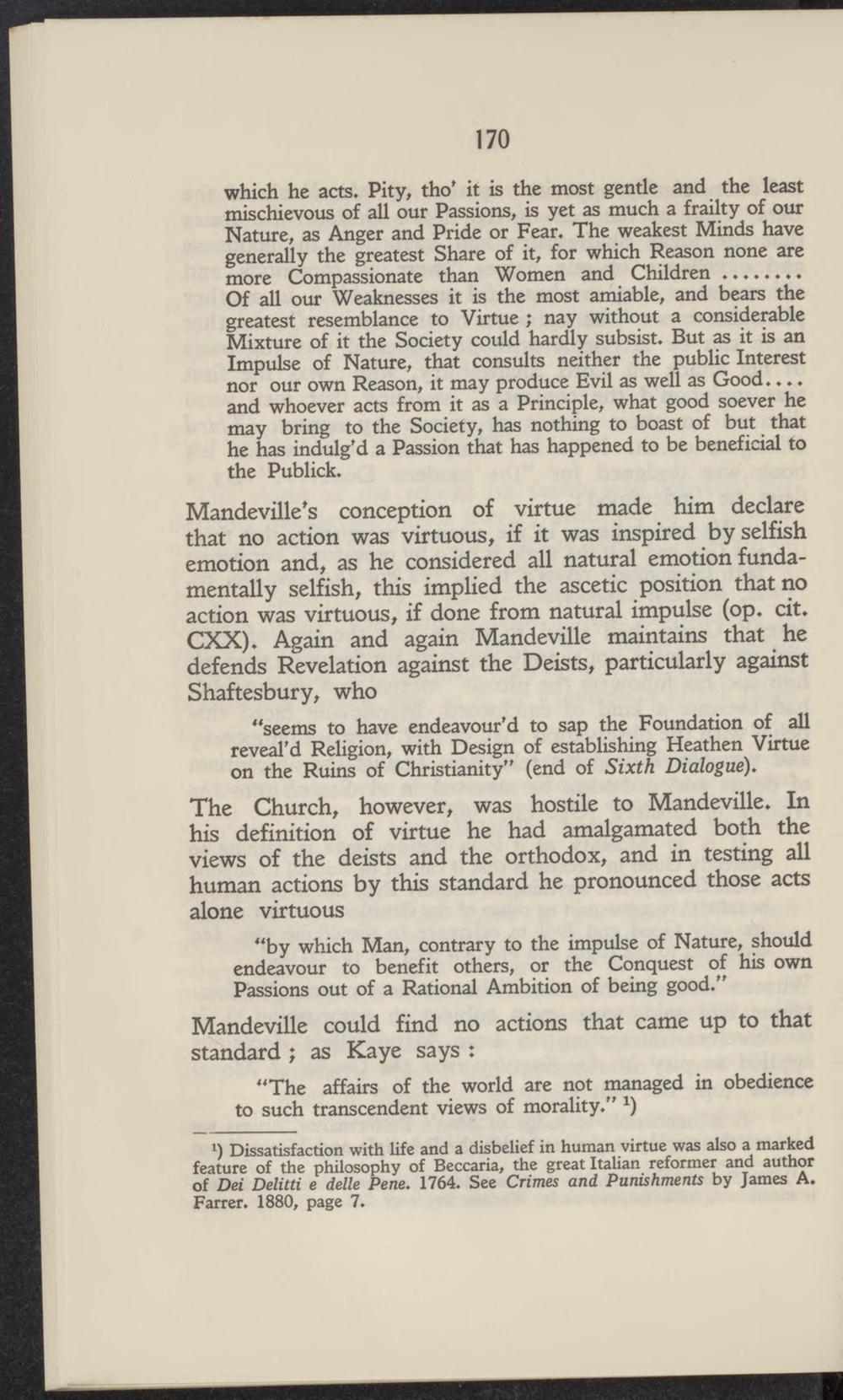 which hc acts. Pity, tho' it is the most gentle and the least mischievous of all our Passions, is yet as much a frailty of our Nature, as Anger and Pride or Fear. The weakest Minds have generally the greatest Share of it, for which Reason none are

more Compassionate than Women and Children

Of all our Weaknesses it is the most amiable, and bears the greatest resemblance to Virtue j nay without a considerable Mixture of it the Society could hardly subsist. But as it is an Impulse of Nature, that consults neither the public Interest nor our own Reason, it may produce Evil as well as Good.... and whoever acts from it as a Principle, what good soever he may Dring to the Society, has nothing to boast of but that he has indulg'd a Passion that has happened to be beneficial to the Publick.

Mandevüle's conception of virtue made him declare that no action was virtuous, if it was inspired by selfish emotion and, as he considered all natural emotion fundamentaüy selfish, this imphed the ascetic position thatno action was virtuous, if done from natural impulse (op. cit. CXX). Again and again Mandevüle mamtains that he defends Revelation against the Deists, particularly against Shaftesbury, who

"seems to have endeavour'd to sap the Foundation of all reveal'd Rehgion, with Design of establishing Heathen Virtue on the Ruins of Christianity'' (end of Sixth Dialogue).

The Church, however, was hostile to Mandevüle. In his defuiition of virtue he had amalgamated both the views of the deists and the orthodox, and in testing aü human actions by this Standard he pronounced those acts alone virtuous

"by which Man, contrary to the impulse of Nature, should endeavour to benefit others, or the Conquest of his own Passions out of a Rational Ambition of being good."

Mandeville could find no actions that came up to that Standard ; as Kaye says :

"The aftairs of the world are not managed in obedience to such transcendent views of morahty." *)

n Dissatisfaction with life and a disbelief in human virtue was also a marked feature of the phüosophy of Beccaria, the great ItaUan reformer and author of Dei Delitti e delle Pene. 1764. See Crimes and Punishments by James A. Farrer. 1880, page 7.