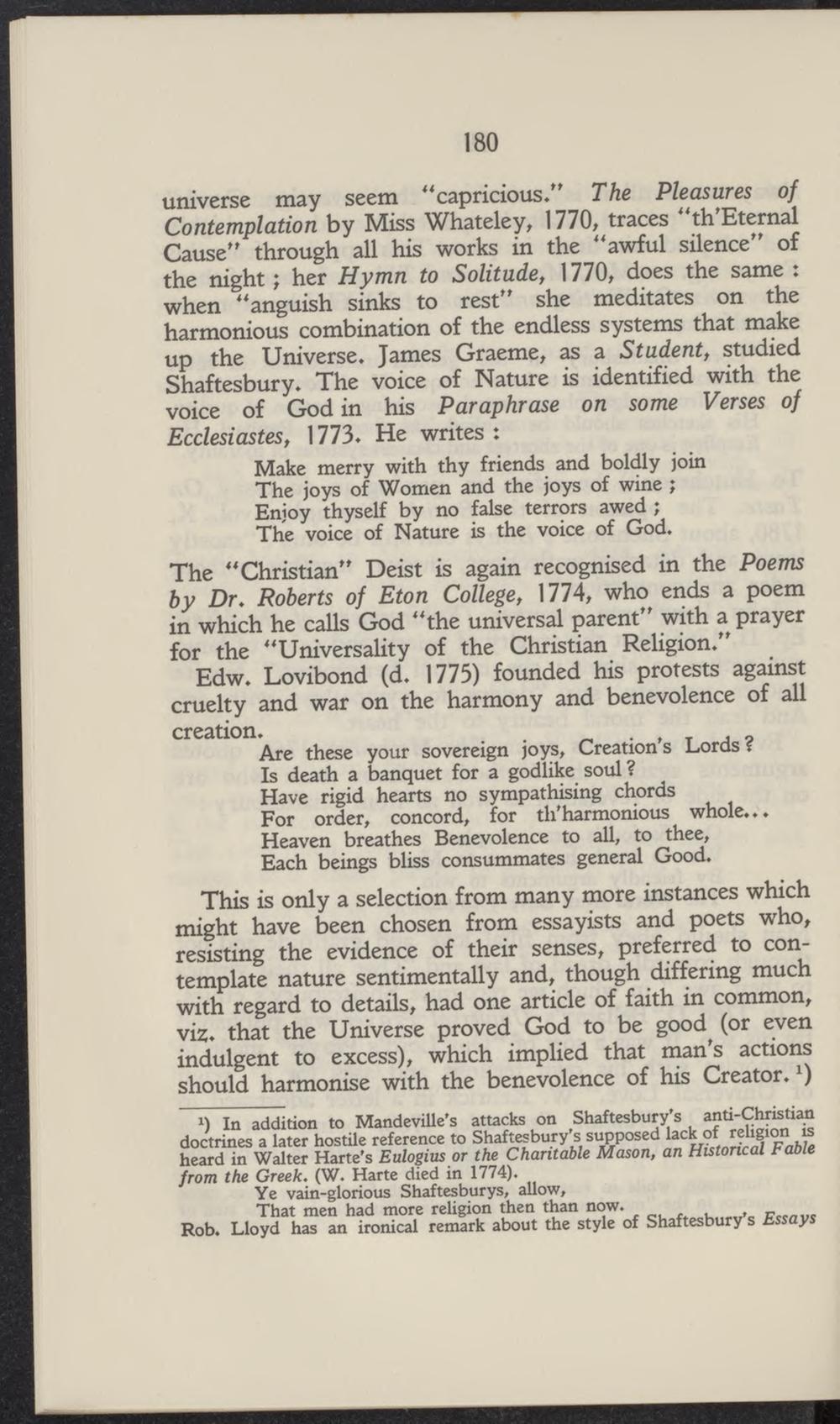 universe may seem "capricious." The Pleasures of Contemplation by Miss Whateley, 1770, traces "th<Eternal Cause" through all his works in the "awful silence of the night; her Hymn to Solitude, 1770, does the same : when "anguish sinks to rest" she meditates on the harmonious combination of the endless systems that make up the Universe. James Graeme, as a Student, studied Shaftesbury. The voice of Nature is identified with the voice of Godin his Paraphrase on some Verses of Ecclesiastes, 1773. He writes :

Make merry with thy friends and boldly join

The "Christian" Deist is again recognised in the Poems by Dr. Roberts of Eton College, 1774, who ends a poem in which he calls God "the universal parent" with a prayer for the "Universahty of the Christian Rehgion."

Edw. Lovibond (d. 1775) founded his protests against cruelty and war on the harmony and benevoience of all crCeition»

Are these your sovereign joys, Creauon's Lords?

Is death a banquet for a godlike soul?

Have rigid hearts no sympathising chords

For order, concord, for di'hannonious whole...

Heaven breathes Benevoience to all, to thee,

This is only a selection from many more instances which might have been chosen from essayists and poets who, resisting the evidence of their senses, preferred to contemplate nature sentimentally and, though diffenng much with regard to details, had one article of faith m common, viz. that the Universe proved God to be good^ (or even indulgent to excess), which implied that man's actions should harmonise with the benevoience of his Creator.*)

i) In addition to MandcviUc's attacks on Shaftesbury's anti-Christian oortrines a later hostile reference to Shaftesbury's;suPPosed^Ct°f,„^f heard in Walter Harte's Eulogius or the Charitable Mason, an Histoncal Fable from the Greek. (W. Harte died in 1774).

Ye vain-glorious Shaftesburys, allow, That men had more rehgion then than now. Rob. Lloyd has an ironical remark about the style of Shaftesbury s Essays