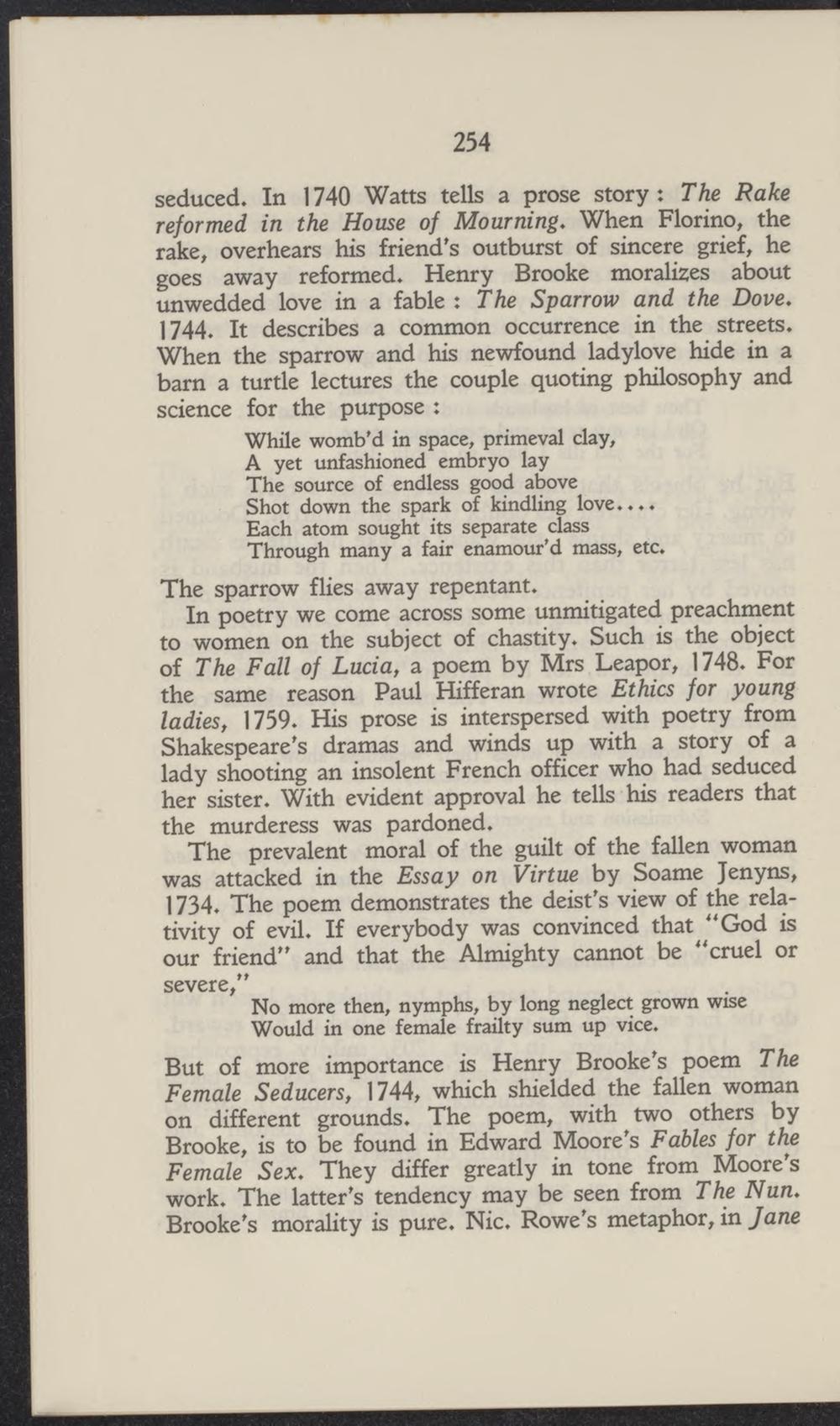 seduced. In 1740 Watts tells a prose story: The Rak» reformed in the House of Mourning. When Florino, the rake, overhears his friend's outburst of sincere grief, he goes away reformed. Henry Brooke moralizes about unwedded love in a fable : The Sparrow and the Dove. 1744. It describeS a common occurrence in the streets. When the sparrow and his newfound ladylove hide in a barn a turtie lectirres the couple quoting phüosophy and science for the purpose :

While wcrób'd in space, primeval clay,

A yet unfashioned embryo lay

The source of endless good above

Shot down the spark of kmdling love....

Each atom sought its separate dass

Through many a fair enamour'd mass, etc

The sparrow fhes away repentant.

In poetry we come across some unmiügated preachment to women on the subject of chastity. Such is the object of The Fall of Lucia, a poem by Mrs Leapor, 1748. For the same reason Paul Hifferan wrote Ethics for young ladies, 1759. His prose is interspersed with poetry from Shakespeare's dramas and winds up with a story of a lady shooting an insolent French officer who had seduced her sister. With evident approval he tells his readers that the murderess was pardoned.

The prevalent moral of the guilt of the fallen woman was attacked in the Essay on Virtue by Soame Jenyns, 1734. The poem demonstrates the deist's view of the relativity of evil. If everybody was convinced that "God is our friend" and that the Almighty cannot be "cruel or seyere,

No more then, nymphs, by long neglect grown wise Would in one female frailty sum up viee.

But of more importance is Henry Brooke's poem The Female Seducers, 1744, which shielded the fallen woman on different grounds. The poem, with two others by Brooke, is to be found in Edward Moore's Fables for the Female Sex. They differ greatly in tone from Moore's work. The latter's tendency may be seen from The Hun. Brooke's morahty is pure. Nic. Rowe's metaphor, in Jane