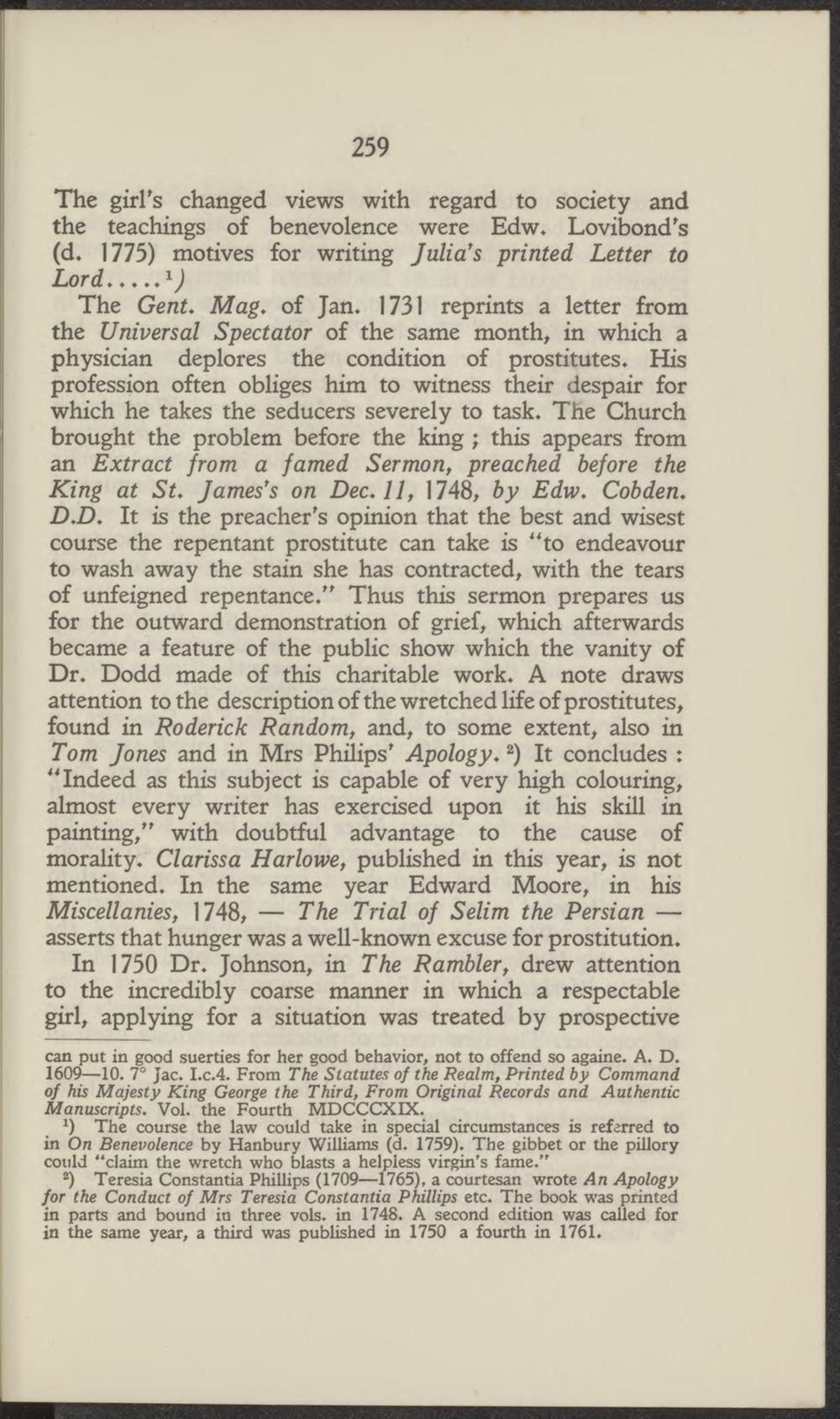 The girl's changed views with regard to society and the teachings of benevoience were Edw. Lovibond's (d. 1775) motives for writing Julia's printed Letter to Lord V

The Gent. Mag. of Jan. 1731 reprints a letter from the Universal Spectator of the same month, in which a physician deplores the condition of prostitutes. His profession often obliges him to witness their despair for which he takes the seducers severely to task. The Church brought the problem before the king; this appears from an Extract from a famed Sermon, preached before the King at St. James's on Dec.11, 1748, by Edw. Cobden. DJ). It is the preacher's opinion that the best and wisest course the repentant prostitute can take is "to endeavour to wash away the stain she has contracted, with the tears of unfeigned repentance." Thus this sermon prepares us for the outward demonstration of grief, which afterwards became a feature of the public show which the vanity of Dr. Dodd made of this charitable work. A note draws attention to the description of the wretched life of prostitutes, found in Roderick Random, and, to some extent, also in Tom Jones and in Mrs Philips' Apology. *) It concludes : "Indeed as this subject is capable of very high colouring, almost every writer has exercised upon it his skill in painting," with doubtful advantage to the cause of morahty. Clarissa Harlowe, published in this year, is not mentioned. In the same year Edward Moore, in his Miscellanies, 1748, — The Trial of Selim the Persian — asserts that hunger was a well-known excuse for prostitution.

In 1750 Dr. Johnson, in The Rambler, drew attention to the incredibly coarse manner in which a respectable girl, applying for a situation was treated by prospective

can put in good suerties for her good behavior, not to offend so againe. A. D. 1609—10. 7° Jac I.c.4. From The Statutes of the Realm, Printed by Command of his Majesty King George the Third, Frotn Original Records and Authentic Manuscripts. Vol. the Fourth MDCCCXK.

*) The course the law could take in special circumstances is referred to in On Benevoience by Hanbury Williams (d. 1759). The gibbet or the pillory could "claim the wretch who blasts a helpless virgin's fame."