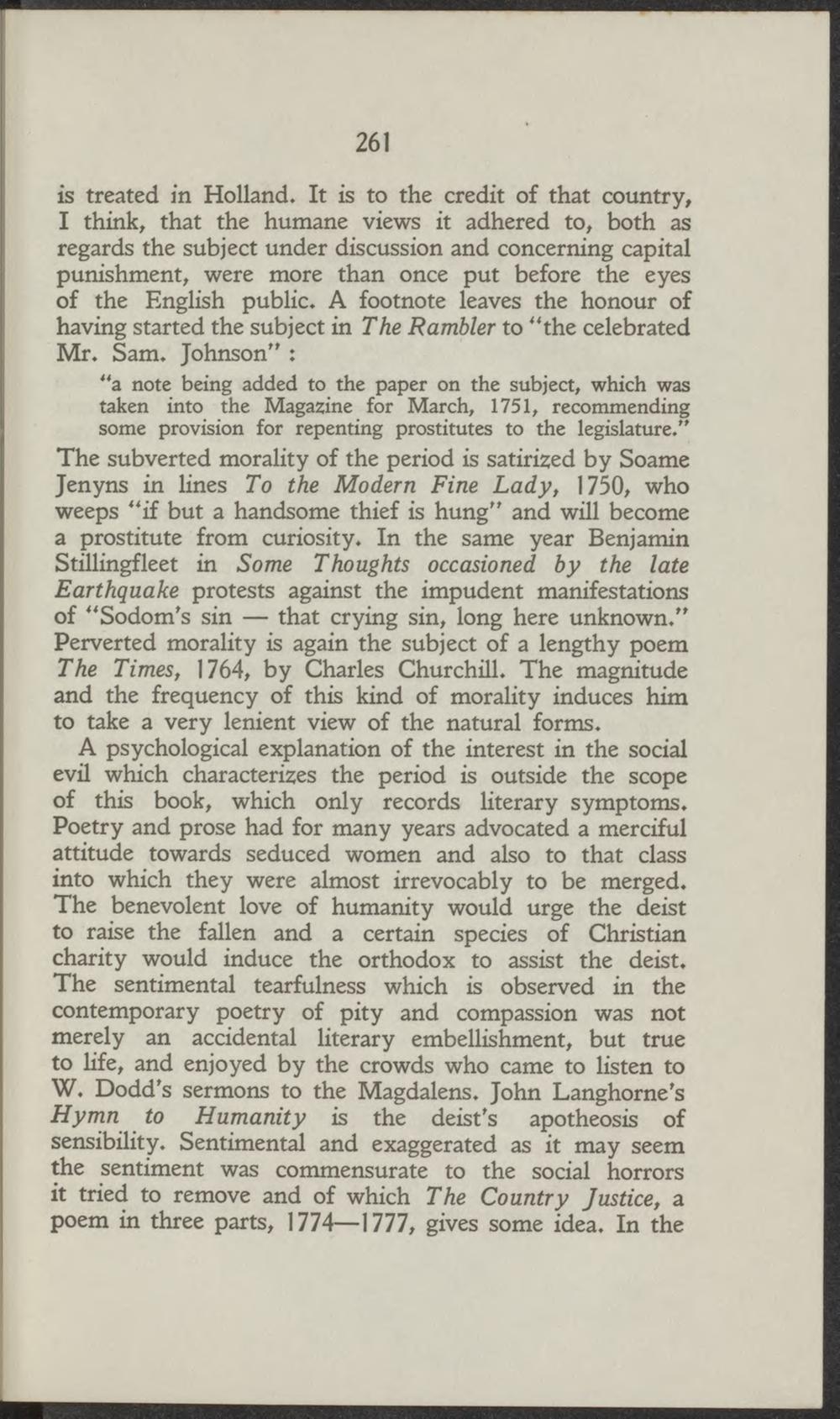 is treated in Holland. It is to the credit of that country, I think, that the humane views it adhered to, both as regards the subject under discussion and concerning capital punishment, were more than once put before the eyes of the English public. A footnote leaves the honour of having started the subject in The Rambler to "the celebrated Mr. Sam. Johnson" :

"a note being added to the paper on the subject, which was taken into the Magazine for March, 1751, recommending some provision for repenting prostitutes to the legislature."

The subverted morahty of the period is satirized by Soame Jenyns in lines To the Modern Fine Lady, 1750, who weeps "if but a handsome thief is hung" and will become a prostitute from curiosity. In the same year Benjamin Stillingfleet in Some Thoughts occasioned by the late Earthquake protests against the impudent manifestations of "Sodom's sin — that crying sin, long here unknown." Perverted morahty is again the subject of a lengthy poem The Times, 1764, by Charles Churchül. The magnitude and the frequency of this kind of morahty induces him to take a very lenient view of the natural forms.

A psychological explanation of the interest in the social evil which characterizes the period is outside the scope of this book, which only records hterary symptoms. Poetry and prose had for many years advocated a merciful attitude towards seduced women and also to that class into which they were almost irrevocably to be merged. The benevolent love of humanity would urge the deist to raise the fallen and a certain species of Christian charity would induce the orthodox to assist the deist, The sentimental tearfulness which is observed in the contemporary poetry of pity and compassion was not merely an accidental hterary embellishment, but true to life, and enjoyed by the crowds who came to listen to W. Dodd's sermons to the Magdalens. John Langhorne's Hymn to Humanity is the deist's apotheosis of sensibility. Sentimental and exaggerated as it may seem the sentiment was commensurate to the social horrors it tried to remove and of which The Country Justice, a poem in three parts, 1774—1777, gives some idea. In the