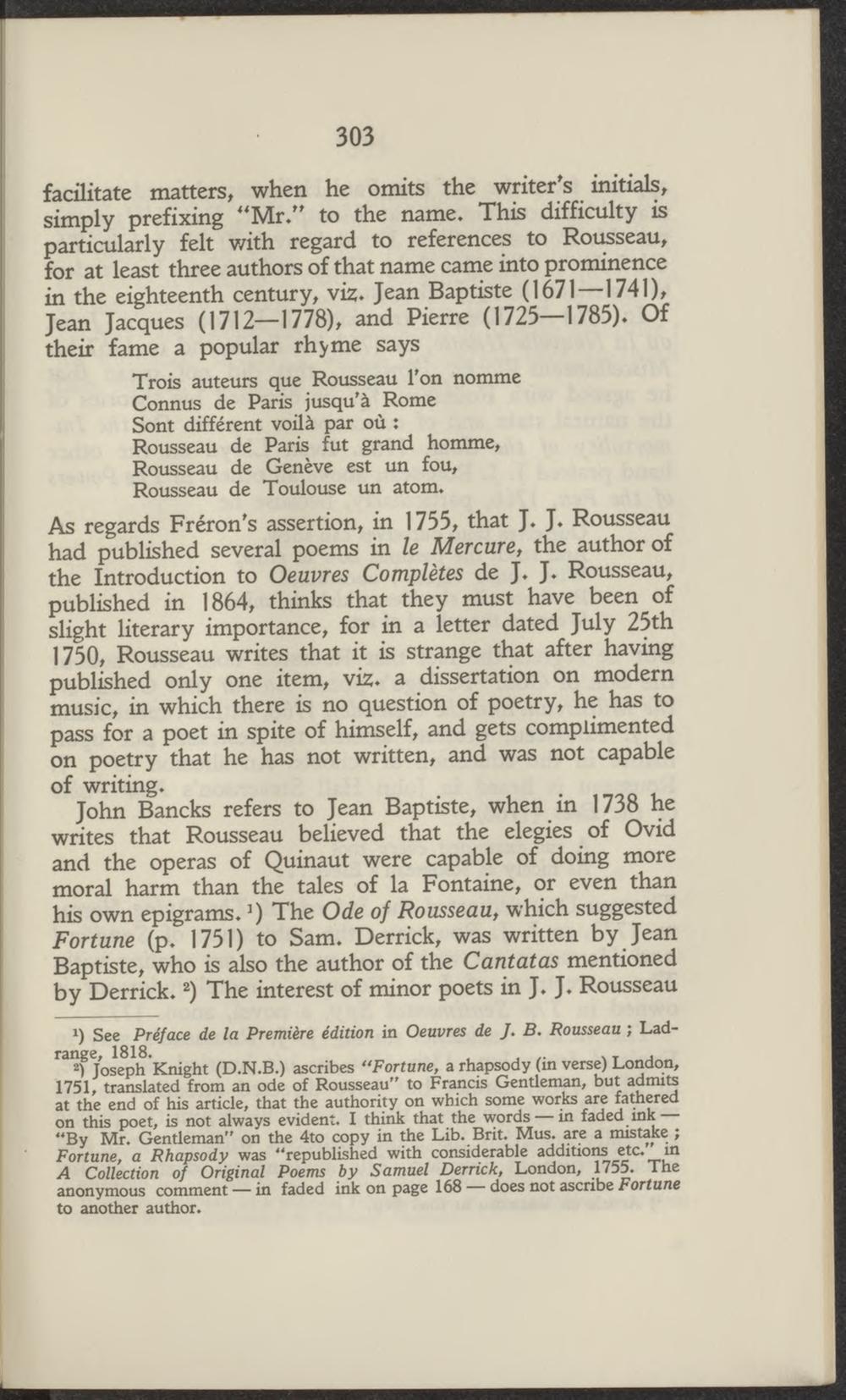 facüitate matters, when he omits the writer's mitials, simply prefixing "Mr." to the name. This difficulty is particularly feit with regard to references to Rousseau, for at least three authors of that name came into prorninence in the eighteenth century, viz. Jean Baptiste (1671—1741), Jean Jacques (1712—1778), and Pierre (1725—1785). Of their fame a popular rhyme says

As regards Fréron's assertion, in 1755, that J. J. Rousseau had published several poems in le Mercure, the author of the Introduction to Oeuvres Complètes de J. J. Rousseau, published in 1864, thinks that they must have been of slight hterary importance, for in a letter dated July 25th

1750, Rousseau writes that it is strange that after having published only one item, viz. a dissertation on modern music, in which there is no question of poetry, he has to pass for a poet in spite of himself, and gets complimented on poetry that he has not written, and was not capable of writing.

John Bancks refers to Jean Baptiste, when in 1738 he writes that Rousseau beheved that the elegies of Ovid and the operas of Quinaut were capable of doing more moral harm than the tales of la Fontaine, or even than his own epigrams.J) The Ode of Rousseau, which suggested Fortune (p. 1751) to Sam. Derrick, was written by Jean Baptiste, who is also the author of the Cantatas mentioned by Derrick.2) The interest of minor poets in J. J. Rousseau

1751, translated from an ode of Rousseau" to Francis Genüeman, but admits at the end of his article, that the authority on which some works are fathered on this poet, is not always evident. I think that the words — in faded ink — "By Mr. Gentleman" on the 4to copy in the Lib. Brit. Mus. are a mtstake ; Fortune, a Rhapsody was "republished with considerable addmons etc. in A Collection of Original Poems by Samuel Derrick, London, 1755. The anonymous comment — in faded ink on page 168 — does not ascnbe Fortune to another author.