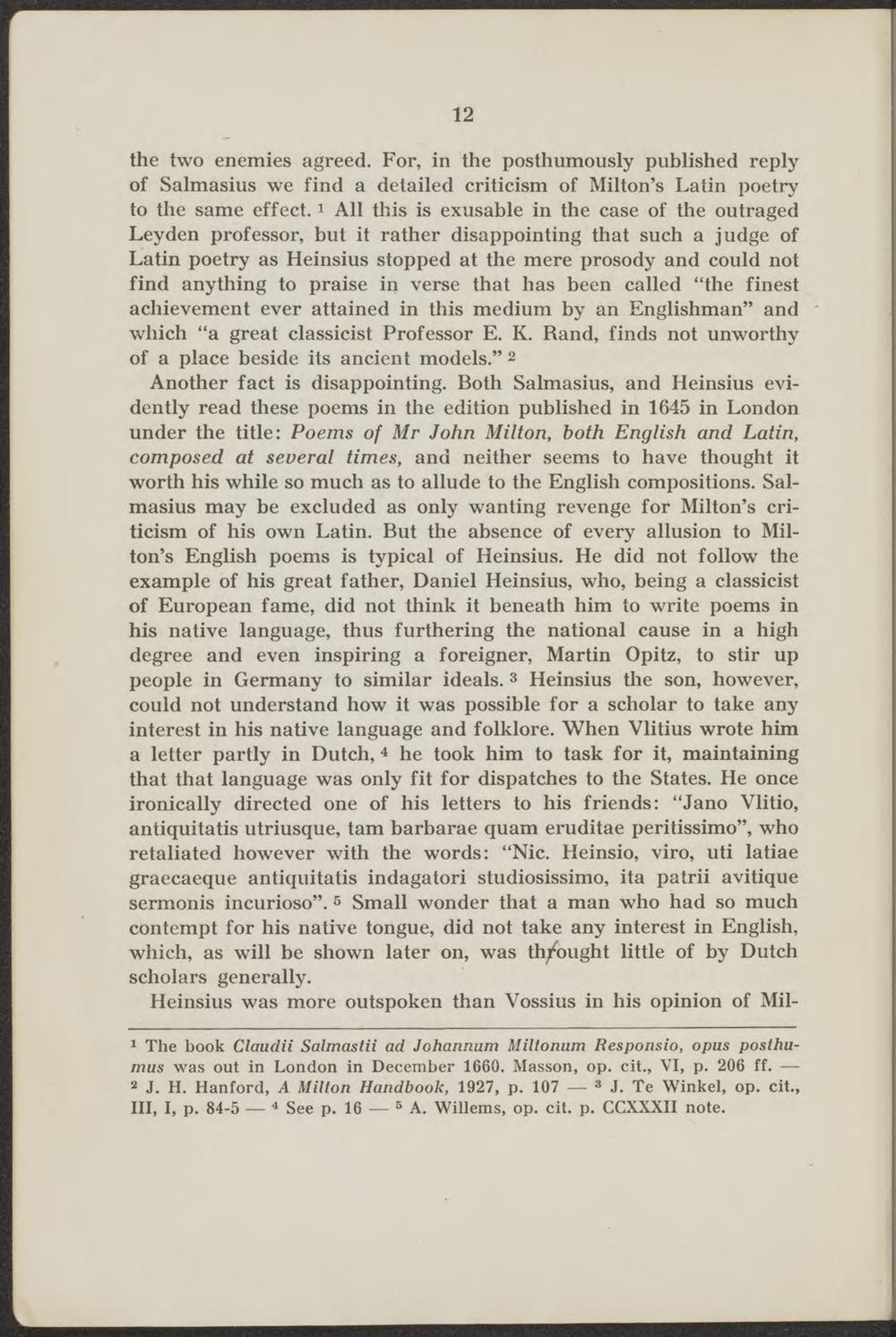 the two enemies agreed. For, in the posthumously published reply of Salmasius we find a detailed criticism of Milton's Latin poetry to the same effect.1 All this is exusable in the case of the outraged Leyden professor, but it rather disappointing that such a judge of Latin poetry as Heinsius stopped at the mere prosody and could not find anything to praise in verse that has been called "the finest achievement ever attained in this medium by an Englishman" and which "a great classicist Professor E. K. Rand, finds not unworthy of a place beside its ancient models." 2

Another fact is disappointing. Both Salmasius, and Heinsius evidently read these poems in the edition published in 1645 in London under the title: Poems of Mr John Milton, both English and Latin, composed at several times, and neither seems to have thought it worth his while so much as to allude to the English compositions. Salmasius may be excluded as only wanting revenge for Milton's criticism of his own Latin. But the absence of every allusion to Milton's English poems is typical of Heinsius. He did not follow the example of his great father, Daniël Heinsius, who, being a classicist of European fame, did not think it beneath him to write poems in his native language, thus furthering the national cause in a high degree and even inspiring a foreigner, Martin Opitz, to stir up people in Germany to similar ideals. 3 Heinsius the son, however, could not understand how it was possible for a scholar to take any interest in his native language and folklore. When Vlitius wrote him a letter partly in Dutch,4 he took him to task for it, maintaining that that language was only fit for dispatches to the States. He öncé ironically directed one of his letters to his friends: "Jano Vlitio, antiquitatis utriusque, tam barbarae quam eruditae peritissimo", who retaliated however with the words: "Nic. Heinsio, viro, uti latiae graecaeque antiquitatis indagatori studiosissimo, ita patrii avitique sermonis incurioso". 5 Small wonder that a man who had so much cOntempt for his native tongue, did not take any interest in English, which, as will be shown later on, was th^bught little of by Dutch scholars generally.

Heinsius was more outspoken than Vossius in his opinion of Mil-