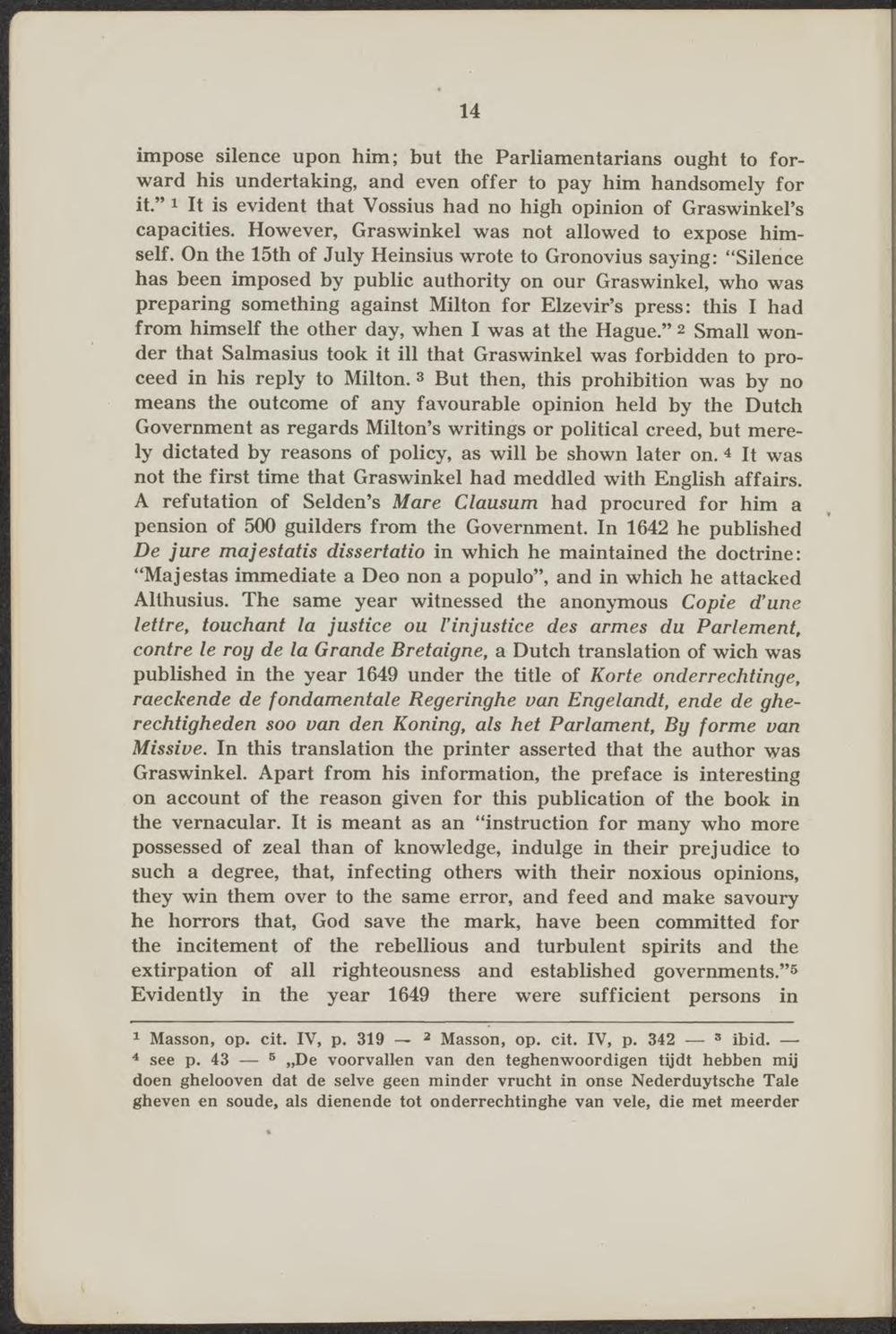 impose silence upon him; but the Parliamentarians ought to forward his undertaking, and even offer to pay him handsomely for it." 1 It is evident that Vossius had no high opinion of GrasWinkel's capacities. However, Graswinkel was not allowed to exposé himself. On the 15th of July Heinsius wrote to Gronovius saying: "Silence has been imposed by public authority on our Graswinkel, who was preparing something against Milton for Elzevir's press: this I had from himself the other day, when I was at the Hague." 2 Small wonder that Salmasius took it ill that Graswinkel was forbidden to proceed in his reply to Milton.' But then, this prohibition was by no means the outcome of any favourable opinion held by the Dutch Government as regards Milton's writings or political creed, but merely dictated by reasons of policy, as will be shown later on.4 It was not the first time that Graswinkel had meddled with English affairs. A refutation of Selden's Mare Clausum had procured for him a pension of 500 guilders from the Government. In 1642 he published De jure majestatis dissertatio in which he maintained the doctrine: "Majestas immediate a Deo non a populo", and in which he attacked Althusius. The same year witnessed the anonymous Copie cTune lettre, touchant Ia justice ou Finjustice des armes du Parlement, contre le roy de la Grande Bretaigne, a Dutch translation of wich was published in the year 1649 under the title of Korte onderrechtinge, raeckende de fondamentale Regeringhe van Engelandt, ende de gherechtigheden soo van den Koning, als het Parlament, By forme van Missive. In this translation the printer asserted that the author was Graswinkel. Apart from his information, the preface is interesting on account of the reason given for this publication of the book in the vernacular. It is meant as an "instruction for many who more possessed of zeal than of knowledge, indulge in their prejudice to such a degree, that, infecting others with their noxious opinions, they win them over to the same error, and feed and make savoury he horrors that, God save the mark, have been committed for the incitement of the rebellious and turbulent spirits and the extirpation of all righteousness and established governments."5 Evidently in the year 1649 there were sufficiënt persons in