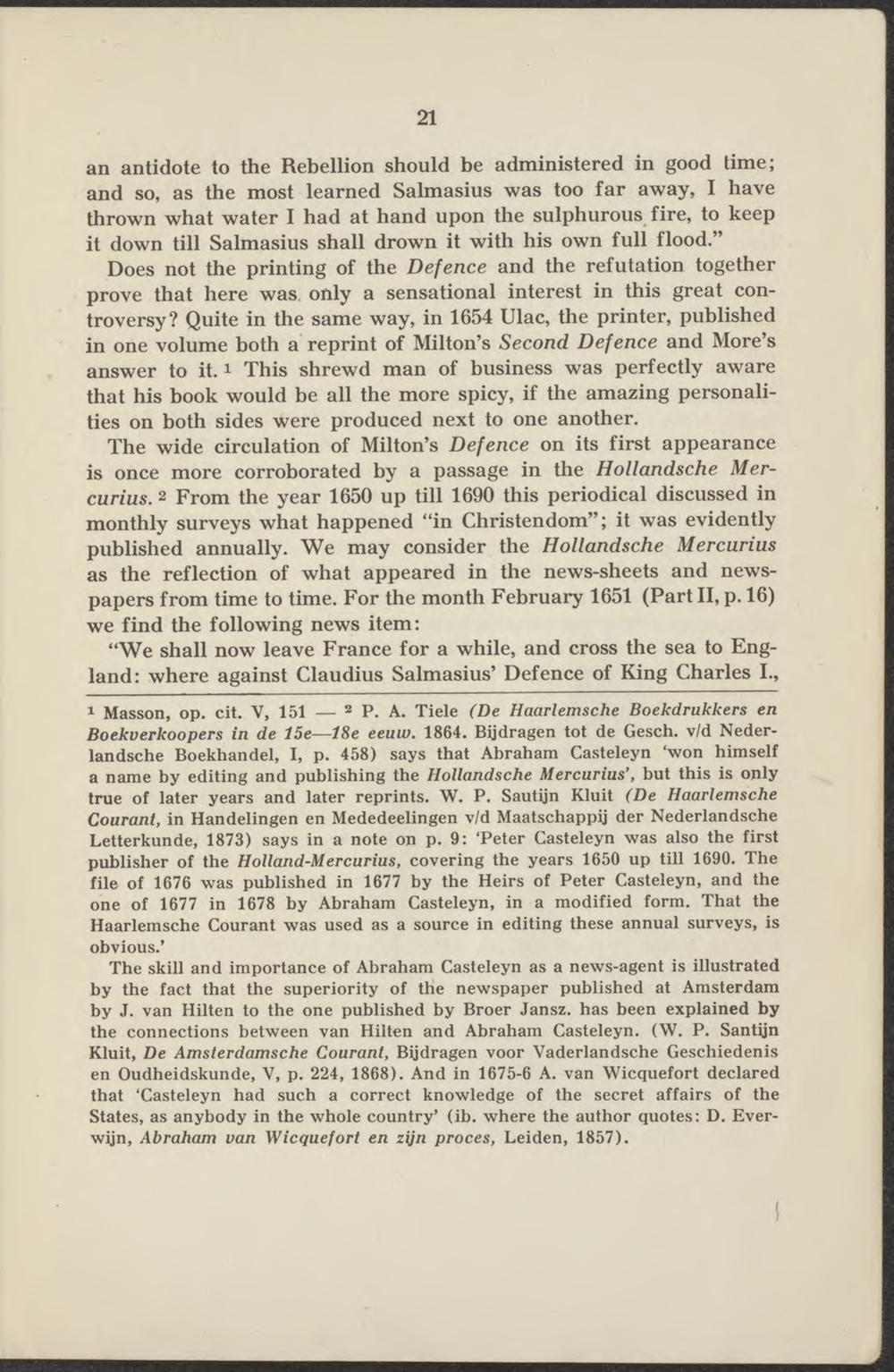 an antidote to the Rebellion should be administered in good time; and so, as the most learned Salmasius was too far away, I have thrown what water I had at hand upon the sulphurousfire, to keep it down till Salmasius shall drown it with his own full flood."

Does not the printing of the Defence and the refutation together prove that here was. only a sensational interest in this great controversy? Quite in the same way, in 1654 Ulac, the printer, published in one volume both a reprint of Milton's Second Defence and More's answer to it.1 This shrewd man of business was perfectly aware that his book would be all the more spicy, if the amazing personalities on both sides were produced next to one another.

The wide circulation of Milton's Defence on its first appearance is once more corroborated by a passage in the Hollandsche Mercurius. 2 From the year 1650 up till 1690 this periodical discussed in monthly surveys what happened "in Christendom"; it was evidently published annually. We may consider the Hollandsche Mercurius as the reflection of what appeared in the news-sheets and newspapers from time to time. For the month February 1651 (Part II, p. 16) we find the following news item:

"We shall now leave Franee for a while, and cross the sea to England: where against Claudius Salmasius' Defence of King Charles I.,

* Masson, op. cit. V, 151 — 3 P. A. Tiele (De Haarlemsche Boekdrukkers en Boekverkoopers in de 15e—18e eeuw. 1864. Bijdragen tot de Gesch. v/d Nederlandsche Boekhandel, I, p. 458) says that Abraham Casteleyn 'won himself a name by editing and publishing the Hollandsche Mercurius', but this is only true of later years and later reprints. W. P. Sautijn Kluit (De Haarlemsche Courant, in Handelingen en Mededeelingen v/d Maatschappij der Nederlandsche Letterkunde, 1873) says in a note on p. 9: 'Peter Casteleyn was also the first publisher of the Holland-Mercurius, covering the years 1650 up till 1690. The file of 1676 was published in 1677 by the Heirs of Peter Casteleyn, and the one of 1677 in 1678 by Abraham Casteleyn, in a modified form. That the Haarlemsche Courant was used as a source in editing these annual surveys, is obvious.'

The skill and importance of Abraham Casteleyn as a news-agent is illustrated by the fact that the superiority of the newspaper published at Amsterdam by J. van Hilten to the one published by Broer Jansz. has been explained by the connections between van Hilten and Abraham Casteleyn. (W. P. Santijn Kluit, De Amsterdamsche Courant, Bijdragen voor Vaderlandsche Geschiedenis en Oudheidskunde, V, p. 224, 1868). And in 1675-6 A. van Wicquefort declared that 'Casteleyn had such a correct knowledge of the secret affairs of the States, as anybody in the whole country* (ib. where the author quotes: D. Everwijn, Abraham van Wicquefort en zijn proces, Leiden, 1857).