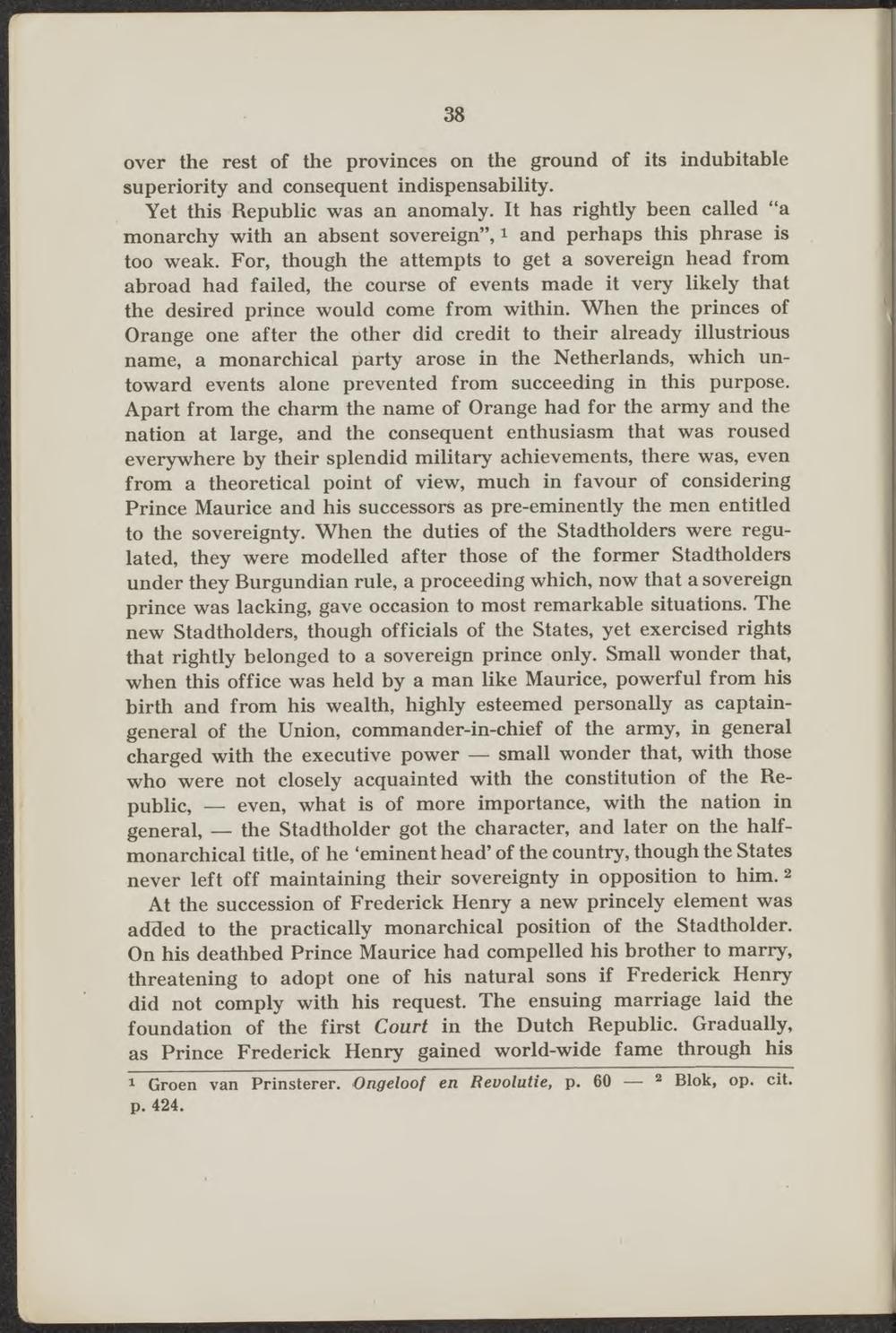 over the rest of the provinces on the ground of its indubitable superiority and consequent indispensability.

Yet this Republic was an anomaly. It has rightly been called "a monarchy with an absent sovereign",1 and perhaps this phrase is too weak. For, though the attempts to get a sovereign head from abroad had failed, the course of events made it very likely that the desired prhice would come from within. When the princes of Orange one after the other did credit to their already illustrious name, a monarchical party arose in the Netherlands, which untoward events alone prevented from succeeding in this purpose. Apart from the charm the name of Orange had for the army and the nation at large, and the consequent enthusiasm that was roused everywhere by their splendid military achievements, there was, even from a theoretical point of view, much in favour of considering Prince Maurice and his successors as pre-eminently the men entitled to the sovereignty. When the duties of the Stadtholders were regulated, they were modelled after those of the former Stadtholders under they Rurgundian rule, a proceeding which, now that a sovereign prince was lacking, gave occasion to most remarkable situations. The new Stadtholders, though officials of the States, yet exercised rights that rightly belonged to a sovereign prince only. Small wonder that, when this office was held by a man like Maurice, powerful from his birth and from his wealth, highly esteemed personally as captaingeneral of the Union, commander-in-chief of the army, in general charged with the executive power — small wonder that, with those who were not closely acquainted with the constitution of the Republic, — even, what is of more importance, with the nation in general, — the Stadtholder got the character, and later on the halfmonarchical title, of he 'eminent head' of the country, though the States never left off maintaining their sovereignty in opposition to him.2

At the succession of Frederick Henry a new princely element was added to the practically monarchical position of the Stadtholder. On his deathbed Prince Maurice had compelled his brother to marry, threatening to adopt one of his natural sons if Frederick Henry did not comply with his request. The ensuing marriage laid the foundation of the first Court in the Dutch Republic. Gradually, as Prince Frederick Henry gained world-wide fame through his 1 Groen van Prinsterer. Ongeloof en Revolutie, p. 60 — 9 Blok, op. cit. p. 424.