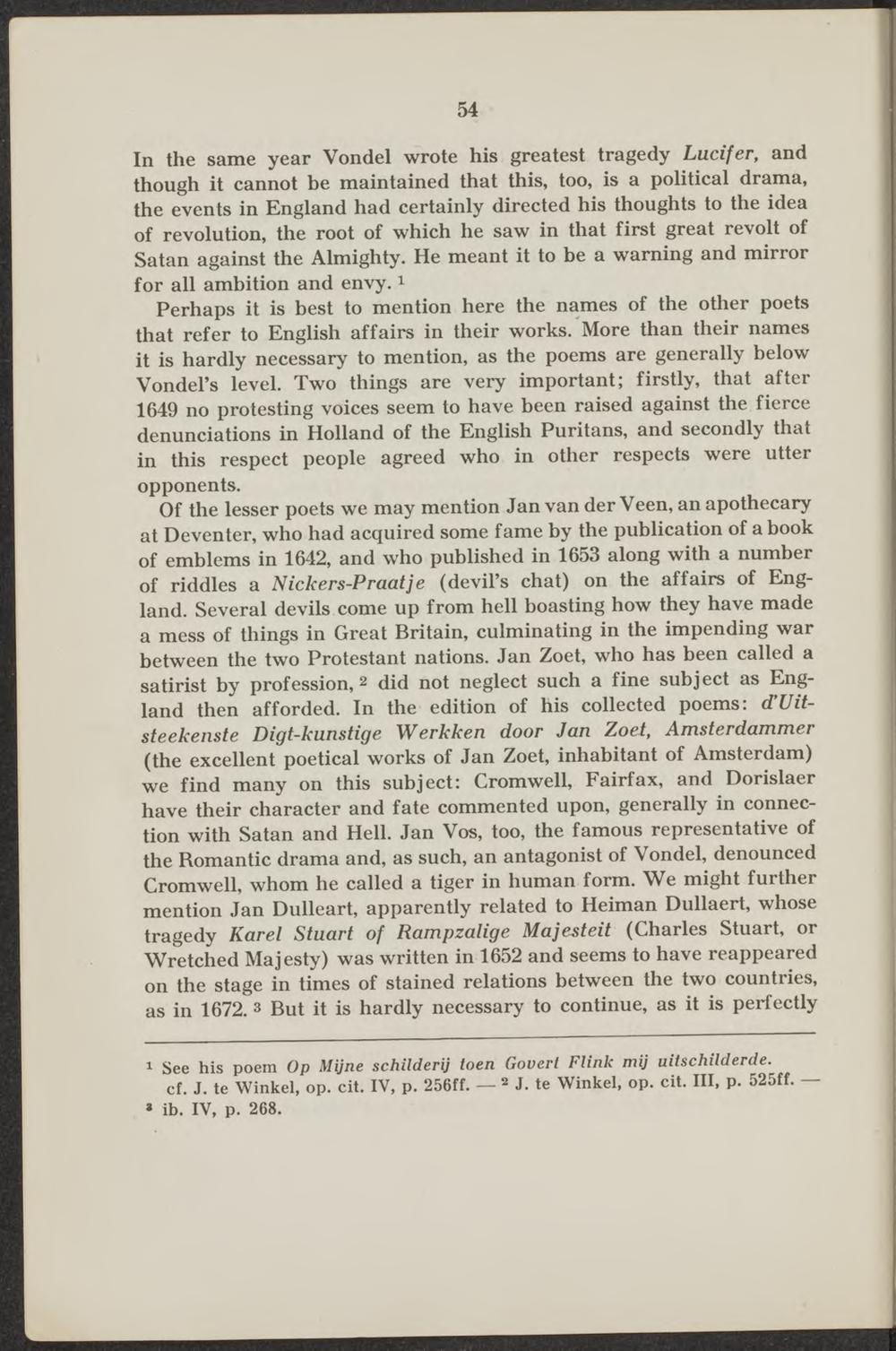 In the same year Vondel wrote his greatest tragedy Lucifer, and though it cannot be maintained that this, too, is a political drama, the events in England had certainly directed his thoughts to the idea of revolution, the root of which he saw in that first great revolt of Satan against the Almighty. He meant it to be a warning and mirror for all ambition and envy.1

Perhaps it is best to mention here the names of the other poets that ref er to English affairs in their works. More than their names it is hardly necessary to mention, as the poems are generally below Vondel's level. Two things are very important; firstly, that after 1649 no protesting voices seem to have been raised against the fierce denunciations in Holland of the EngUsh Puritans, and secondly that in this respect people agreed who in other respects were utter opponents.

Of the lesser poets we may mention Jan van der Veen, an apothecary at Deventer, who had acquired some f ame by the publication of a book of emblems in 1642, and who published in 1653 along with a number of riddles a Nickers-Praatje (devil's chat) on the affairs of England. Several devils come up from heil boasting how they have made a mess of things in Great Britain, culminating in the impending war between the two Protestant nations. Jan Zoet, who has been called a satirist by profession, 2 did not neglect such a fine subject as England then afforded. In the edition of his collected poems: dUitsteekenste Digt-kunstige Werkken door Jan Zoet, Amsterdammer (the excellent poetical works of Jan Zoet, inhabitant of Amsterdam) we find many on this subject: Cromwell, Fairfax, and Dorislaer have their character and fate commented upon, generally in connection with Satan and Heil. Jan Vos, too, the famous representative of the Romantic drama and, as such, an antagonist of Vondel, denounced Cromwell, whom he called a tiger in human form. We might further mention Jan Dulleart, apparently related to Heiman Dullaert, whose tragedy Karei Stuart of Rampzalige Majesteit (Charles Stuart, or Wretched Majesty) was written in 1652 and seems to have reappeared on the stage in times of stained relations between the two countries, as in 1672. 3 But it is hardly necessary to continue, as it is perfectly