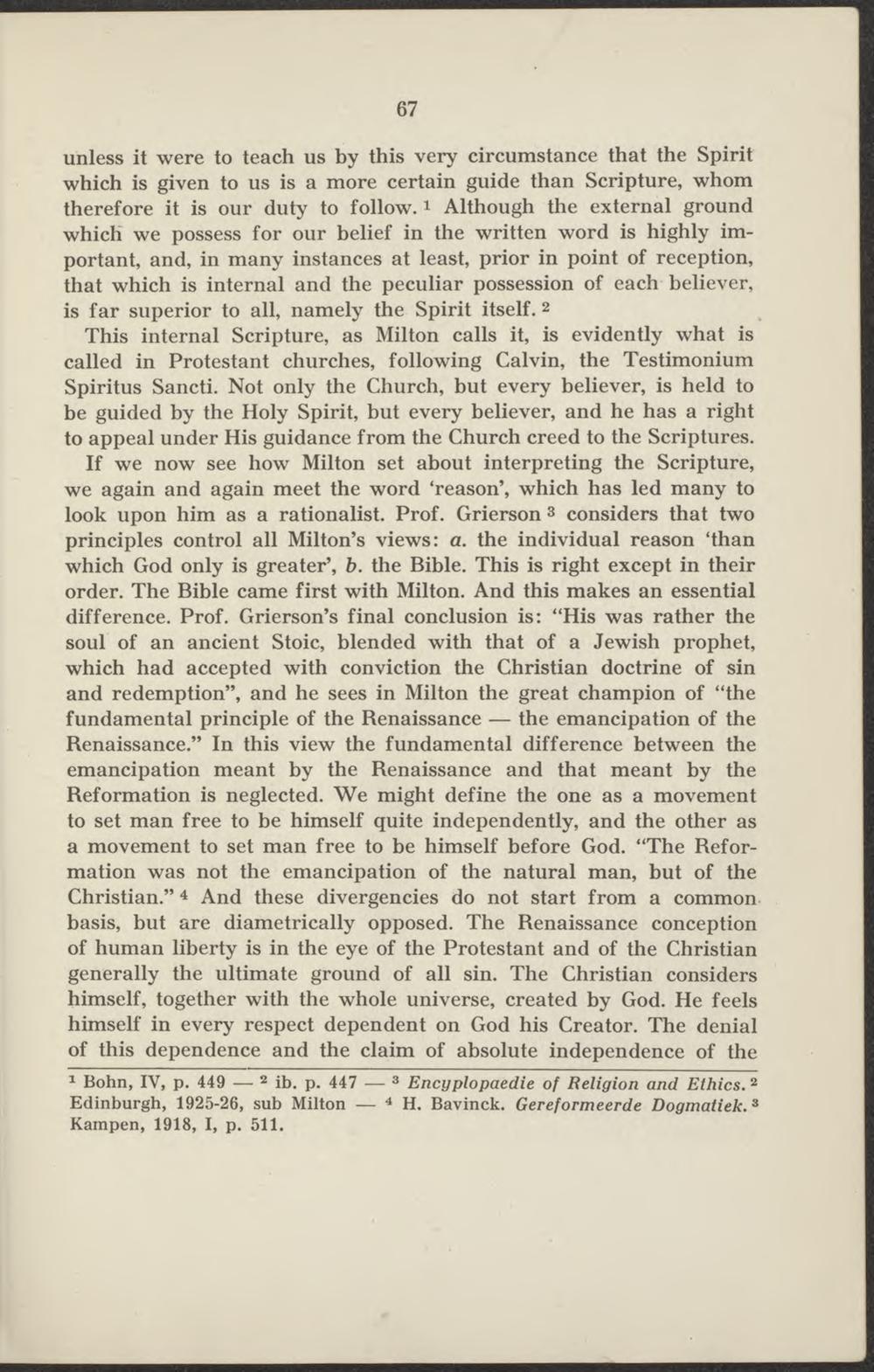 unless it were to teach us by this very circumstance that the Spirit which is given to us is a more certain guide than Scripture, whom therefore it is our duty to follow.1 Although the external ground which we possess for our belief in the written word is highly important, and, in many instances at least, prior in point of reception, that which is internal and the peculiar possession of each- believer, is far superior to all, namely the Spirit itself.2

This internal Scripture, as Milton calls it, is evidently what is called in Protestant churches, following Calvin, the Testimonium Spiritus Sancti. Not only the Church, but every believer, is held to be guided by the Holy Spirit, but every believer, and he has a right to appeal under His guidance from the Church creed to the Scriptures.

If we now see how Milton set about interpreting the Scripture, we again and again meet the word 'reason', which has led many to look upon him as a rationalist. Prof. Grierson3 considers that two principles control all Milton's views: a. the individual reason 'than which God only is greater', b. the Bible. This is right except in their order. The Bible came first with Milton. And this makes an essential difference. Prof. Grierson's final conclusion is: "His was rather the soul of an ancient Stoic, blended with that of a Jewish prophet, which had accepted with conviction the Christian doctrine of sin and redemption", and he sees in Milton the great champion of "the fundamental principle of the Renaissance — the emancipation of the Renaissance." In this view the fundamental difference between the emancipation meant by the Renaissance and that meant by the Reformation is neglected. We might define the one as a movement to set man free to be himself quite independently, and the other as a movement to set man free to be himself before God. "The Reformation was not the emancipation of the natural man, but of the Christian."4 And these divergencies do not start from a common basis, but are diametrically opposed. The Renaissance conception of human liberty is in the eye of the Protestant and of the Christian generally the ultimate ground of all sin. The Christian considers himself, together with the whole universe, created by God. He feels himself in every respect dependent on God his Creator. The denial of this dependence and the claim of absolute independence of the