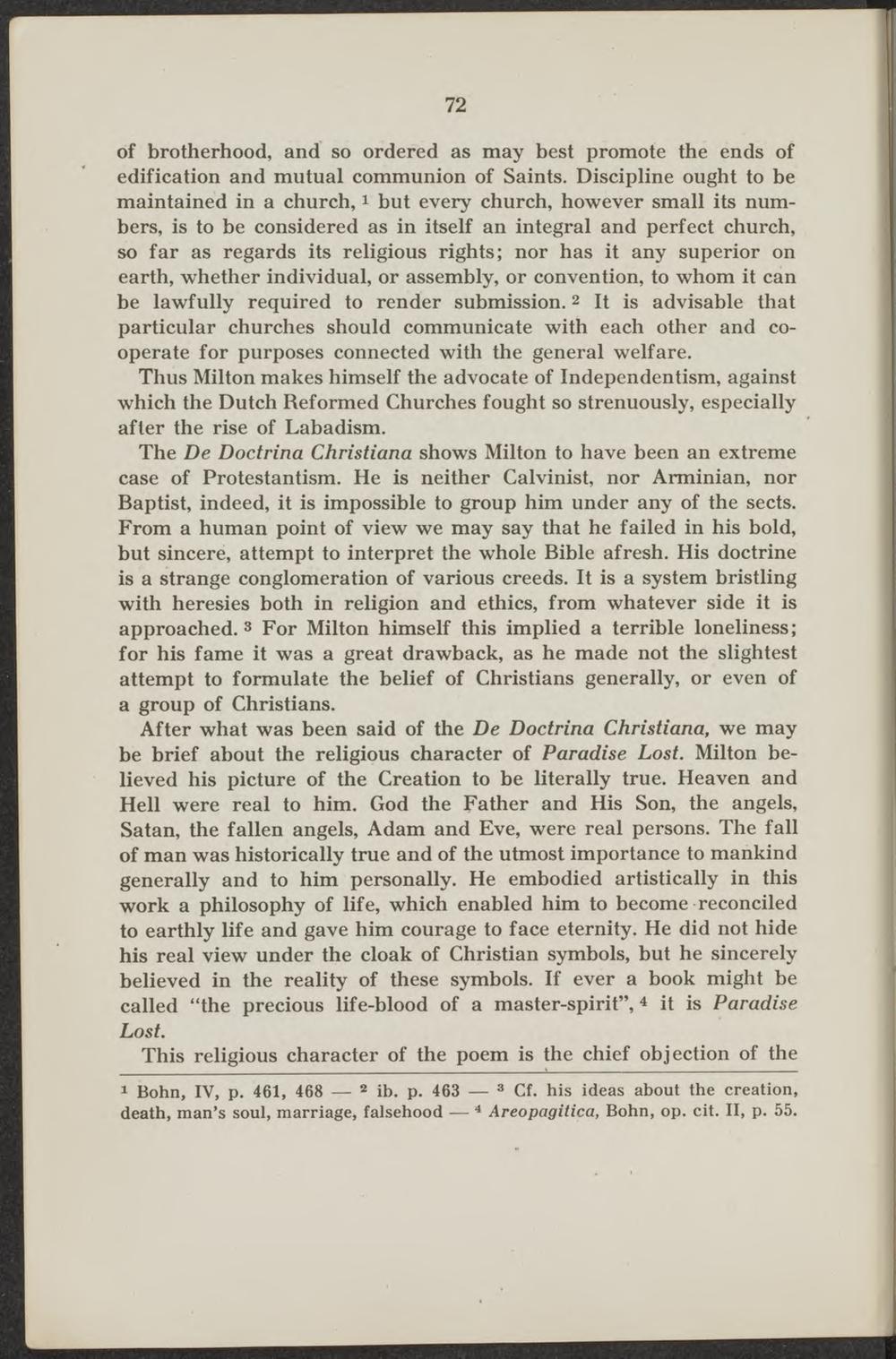 bf brotherhood, and so ordered as may best promote the ends of edification and mutual communion of Saints. Discipline ought to be maintainëd in a church,1 but every church, however small its numbers, is to be considered as in itself an integral and perfect church, so far as regards its religious rights; nor has it any superior on earth, whether individual, or assembly, or convention, to whom it can be lawfully required to render submission.2 It is advisable that particular churches should communicate with each other and coopera te for purposes connected with the general welfare.

Thus Milton makes himself the advocate of Independentism, against which the Dutch Reformed Churches f ought so strenuously, especially after the rise of Labadism.

The De Doctrina Christiana shows Milton to have been an extreme case of Protestantism. He is neither Calvinist, nor Arminian, nor Baptist, indeed, it is impossible to group him under any of the sects. From a human point of view we may say that he failed in his bold, but sinceré, attempt to interpret the whole Bible afresh. His doctrine is a strange conglomeration of various creeds. It is a system bristling with heresies both in religion and ethics, from whatever side it is approached. 3 For Milton himself this implied a terrible loneliness; for his fame it was a great drawback, as he made not the slightest attempt to formulate the belief of Christians generally, or even of a group of Christians.

After what was been said of the De Doctrina Christiana, we may bè brief about the religious character of Paradise Lost. Milton believed his picture of the Creation to be literally true. Heaven and Heil were real to him. God the Father and His Son, the angels, Satan, the f allen angels, Adam and Eve, were real persons. The fall of man was historically true and of the utmost importance to mankind generally and to him personally. He embodied artistically in this work a philosophy of life, which enabled him to become -reconciled to earthly life and gave him courage to face eternity. He did not hide his real view under the cloak of Christian symbols, but he sincerely believed in the reality of these symbols. If ever a book might be called "the precious life-blood of a master-spirit", 4 it is Paradise Lost.