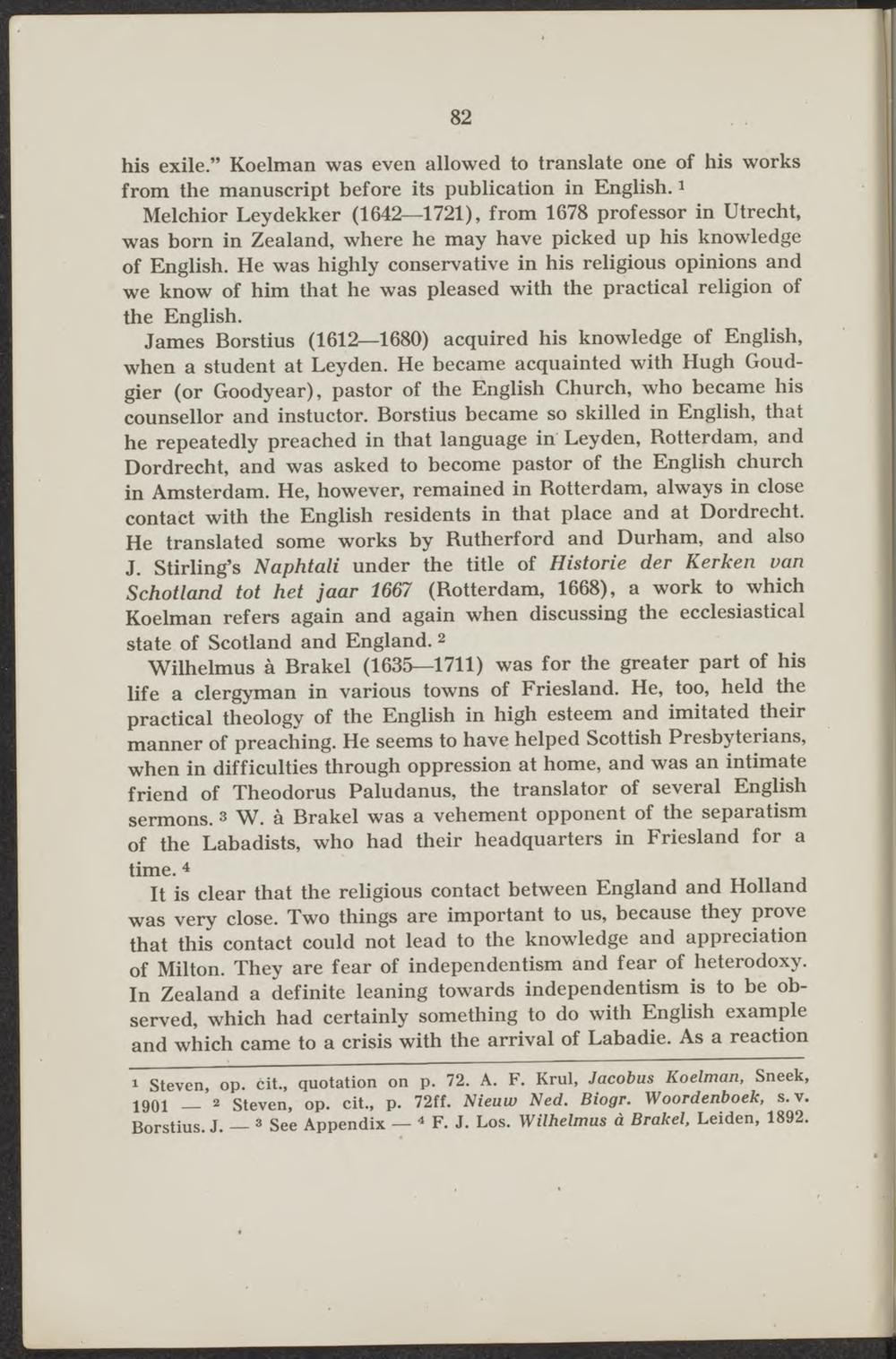 bis exile." Koelman was even allowed to translate one of bis works from the manuscript before its publication in English.»

Melchior Leydekker (1642—1721), from 1678 professor in Utrecht, was born in Zealand, where he may have picked up his knowledge of English. He was highly conservative in his religious opinions and we know of him that he was pleased with the practical religion of the English.

James Borstius (1612—1680) acquired his knowledge of English, when a student at Leyden. He became acquainted with Hugh Goudgier (or Goodyear), pastor of the English Church, who became his counsellor and instuctor. Borstius became so skilied in English, that he repeatedly preached in that language in Leyden, Botterdam, and Dordrecht, and was asked to become pastor of the English church in Amsterdam. He, however, remained in Rotterdam, always in close contact with the EngUsh residents in that place and at Dordrecht. He translated some works by Rutherford and Durham, and also J. StirUng's Naphtali under the title of Historie der Kerken van Schotland tot het jaar 1667 (Rotterdam, 1668), a work to which Koelman refers again and again when discussing the ecclesiastical state of Scotland and England. 2

Wilhelmus a Brakel (1635—1711) was for the greater part of his life a clergyman in various towns of Friesland. He, too, held the practical theology of the English in high esteem and imitated their manner of preaching. He seems to have helped Scottish Presbyterians, when in difficulties through oppression at home, and was an intimate friend of Theodorus Paludanus, the translator of several EngUsh sermons. 3 W. a Brakel was a vehement opponent of the separatism of the Labadists, who had their headquarters in Friesland for a time. *

It is clear that the reUgious contact between England and HoUand was very close. Two things are important to us, because they prove that this contact could not lead to the knowledge and appreciation of Milton. They are fear of independentism and fear of heterodoxy. In Zealand a definite leaning towards independentism is to be observed, which had certainly something to do with English example and which came to a crisis with the arrival of Labadie. As a reaction