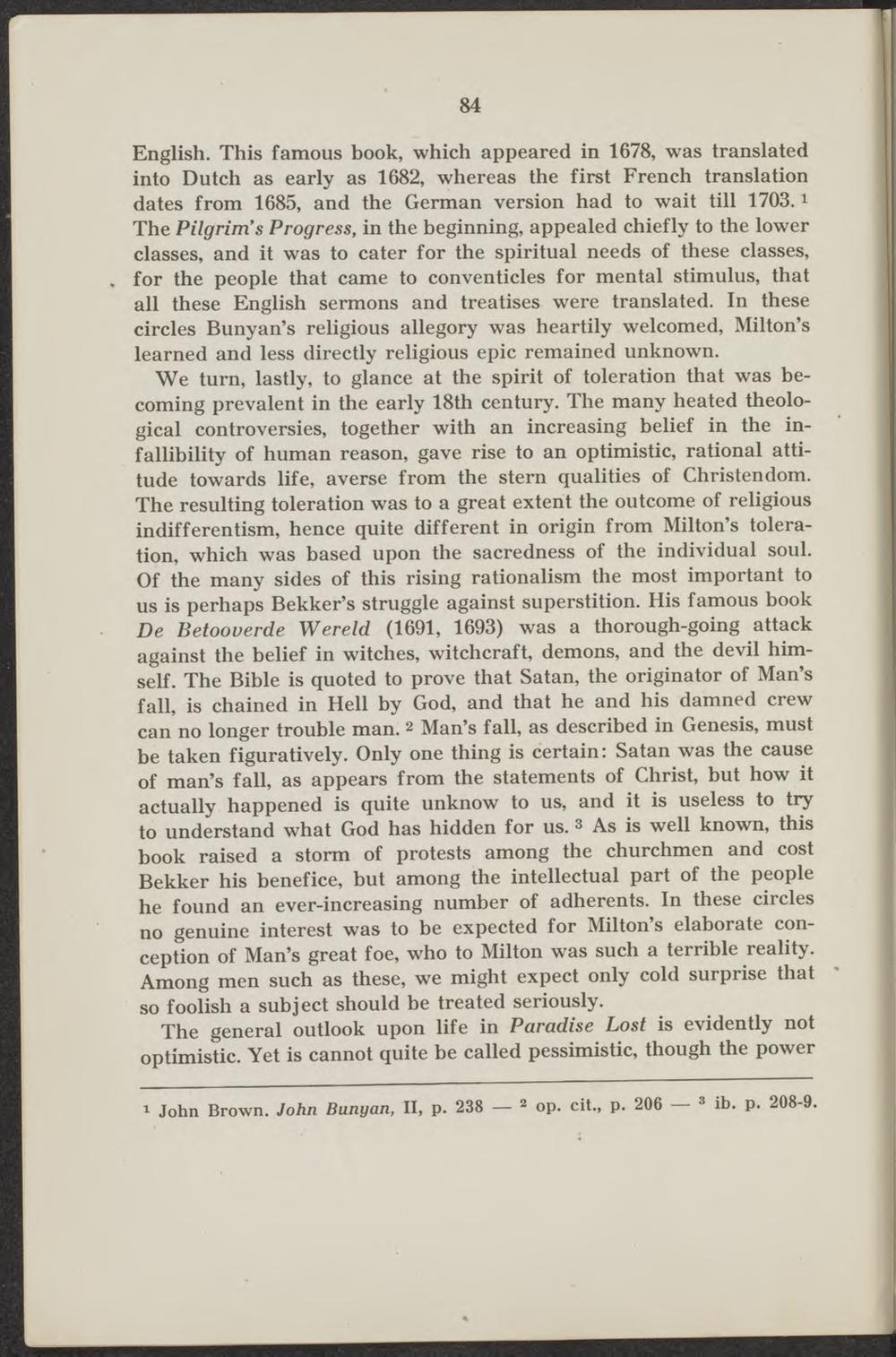 English. This famous book, which appeared in 1678, was translated into Dutch as early as 1682, whereas the first French translation dates from 1685, and the German version had to wait till 1703.1 The Pilgrim's Progress, in the beginning, appealed chiefly to the lower classes, and it was to cater for the spiritual needs of these classes, for the people that came to conventicles for mental stimulus, that all these EngUsh sermons and treatises were translated. In these circles Bunyan's religious allegory was heartily welcomed, Milton's learned and less directly religious epic remained unknown.

We turn, lastly, to glance at the spirit of toleration that was beraming prevalent in the early 18th century. The many heated theological controversies, together with an increasing beUef in the infallibility of human reason, gave rise to an optimistic, rational attitude towards life, averse from the stern qualities of Christendom. The resulting toleration was to a great exterit the outcome of religious indifferentism, hence quite different in origin from Milton's toleration, which was based upon the sacredness of the individual soul. Of the many sides of this rising rationaüsm the most important to us is perhaps Bekker's struggle against superstition. His famous book De Betooverde Wereld (1691, 1693) was a thorough-going attack against the belief in witches, witchcraft, demons, and the devil himself. The Bible is quoted to prove that Satan, the originator of Man's fall, is chained in Heil by God, and that he and his damned crew can no longer trouble man:2 Man's fall, as described in Genesis, must be taken figuratively. Only one thing is certain: Satan was the cause of man's fall, as appears from the statements of Christ, but how it actually happened is quite unknow to us, and it is useless to try to understand what God has hidden for us. 3 As is well known, this book raised a storm of protests among the churchmen and cost Bekker his benefice, but among the intellectual part of the people he found an ever-increasing number of adherents. In these circles no genuine interest was to be expected for Milton's elaborate conception of Man's great foe, who to Milton was such a terrible reatity. Among men such as these, we might expect only cold surprise that so foolish a subject should be treated seriously.

The general outlook upon life in Paradise Lost is evidently not optimistic. Yet is cannot quite be called pessimistic, though the power