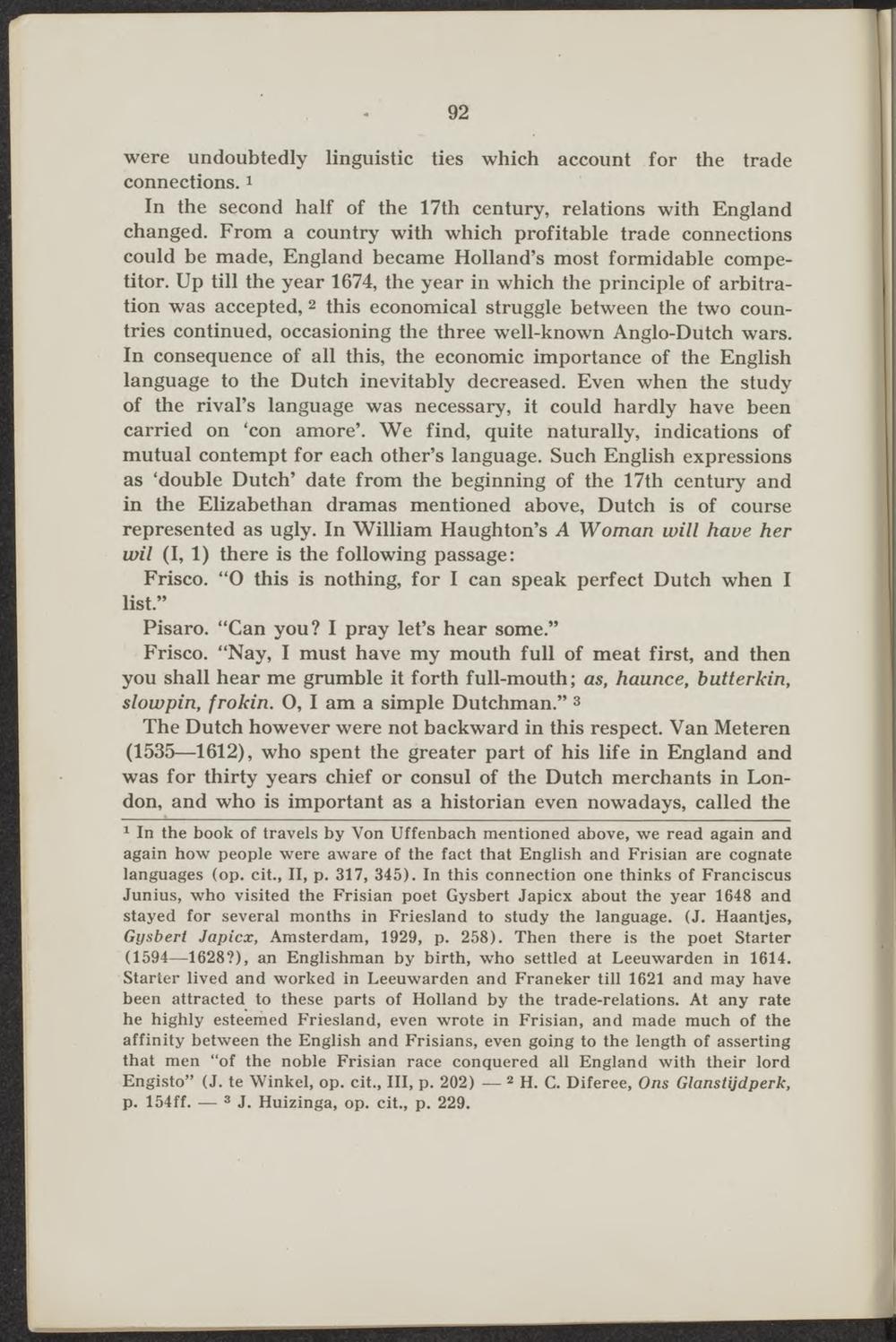 were undoubtedly linguistic ties which account for the trade connections.1

In the second half of the 17th century, relations with England changed. From a country with which profitable trade connections could be made, England became Holland's most formidable compefitor. Up till the year 1674, the year in which the principle of arbitration was accepted, 2 this economical struggle between the two countries continued, occasioning the three well-known Anglo-Dutch wars. In consequence of all this, the economie importance of the English language to the Dutch inevitably decreased. Even when the study of the rival's language was necessary, it could hardly have been carried on 'con amore'. We find, quite naturally, indications of mutual contempt for each other's language. Such English expressions as 'doublé Dutch' date from the beginning of the 17th century and in the Elizabethan dramas mentioned above, Dutch is of course represented as ugly. In William Haughton's A Woman will have her wil (1,1) there is the following passage:

Frisco. "O this is nothing, for I can speak perfect Dutch when I list."

Frisco. "Nay, I must have my mouth full of meat first, and then you shall hear me grumble it forth full-mouth; as, haunce, butterkin, slowpin, frokin. O, I am a simple Dutchman." 3

The Dutch however were not backward in this respect. Van Meteren (1535—1612), who spent the greater part of his life in England and was for thirty years chief or consul of the Dutch merchants in London, and who is important as a historian even nowadays, called the

1 In the book of travels by Von Uffenbach mentioned above, we read again and again how people were aware of the fact that English and Frisian are cognate languages (op. cit., II, p. 317, 345). In this connection one thinks of Franciscus Junius, who visited the Frisian poet Gysbert Japicx about the year 1648 and stayed for several months in Friesland to study the language. (J. Haantjes, Gysbert Japicx, Amsterdam, 1929, p. 258). Then there is the poet Starter (1594—1628?), an Englishman by birth, who settled at Leeuwarden in 1614. Starter lived and worked in Leeuwarden and Franeker till 1621 and may have been attracted to these parts of Holland by the trade-relations. At any rate he highly esteemed Friesland, even wrote in Frisian, and made much of the affinity between the English and Frisians, even going to the length of asserting that men "of the noble Frisian race conquered all England with their lord Engisto" (J. te Winkel, op. cit., III, p. 202) — 2 H. C. Diferee, Ons Glanstijdperk, p. 154ff. — » J. Huizinga, op. cit., p. 229.