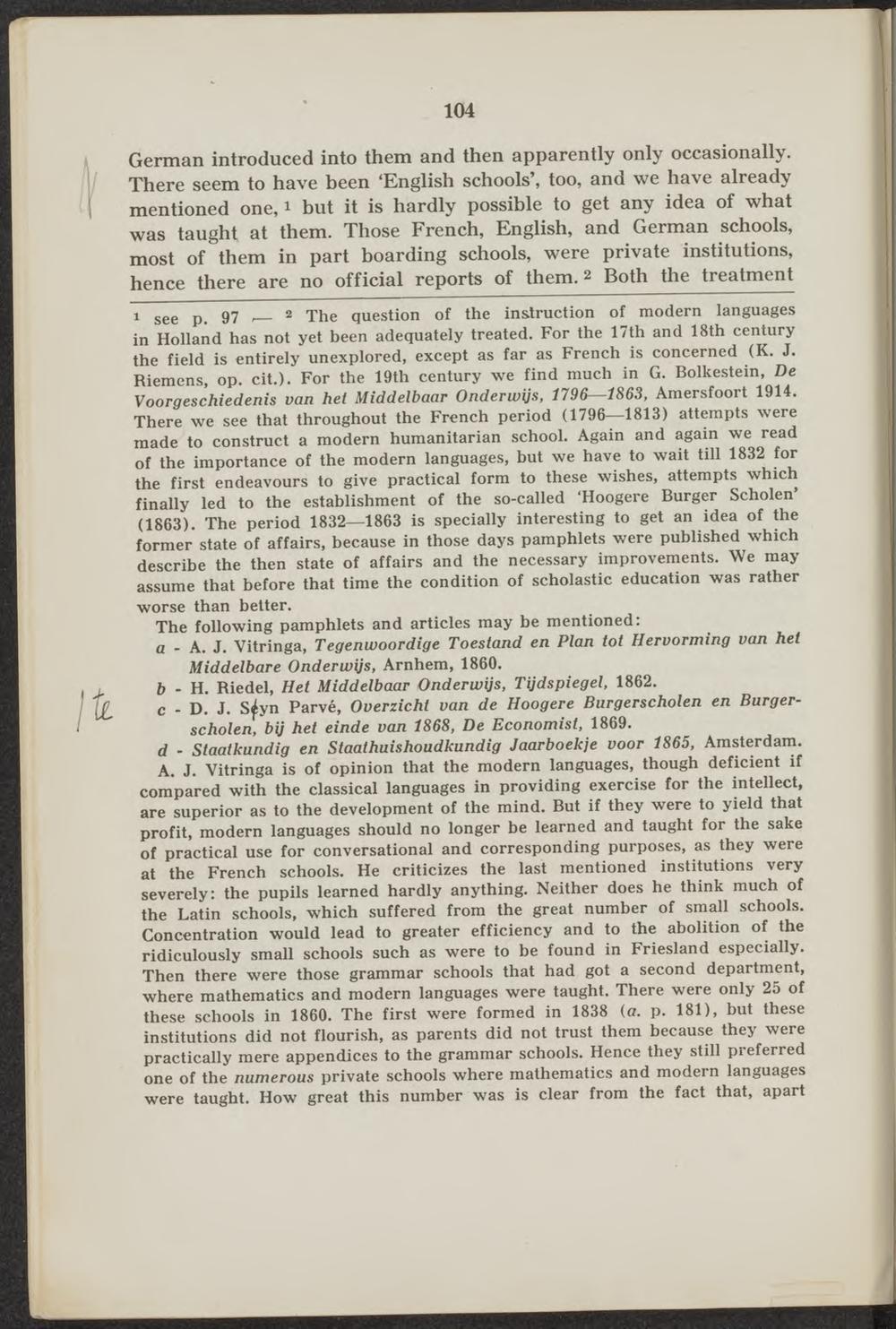 German introduced into them and then apparently only occasionally. There seem to have been 'English schools', too, and we have already mentioned one,» but it is hardly possible to get any idea of what was taught at them. Those French, English, and German schools, most of them in part boarding schools, were private institutions, hence there are no official reports of them.2 Both the treatment

1 see p. 97 — 2 The question of the instruction of modern languages in Holland has not yet been adequately treated. For the 17th and 18th century the field is entirely unexplored, except as far as French is concerned (K. J. Riemens, op. cit.). For the 19th century we find much in G. Bolkestein, De Voorgeschiedenis van het Middelbaar Onderwijs, 1796—1863, Amersfoort 1914. There we see that throughout the French period (1796—1813) attempts were made to construct a modern humanitarian school. Again and again we read of the importance of the modern languages, but we have to wait till 1832 for the first endeavours to give practical form to these wishes, attempts which finally led to the establishment of the so-called 'Hoogere Burger Scholen (1863). The period 1832—1863 is specially interesting to get an idea of the former state of affairs, because in those days pamphlets were published which describe the then state of affairs and the necessary improvements. We may assume that before that time the condition of Scholastic education was rather worse than better.

The following pamphlets and articles may be mentioned:

Middelbare Onderwijs, Arnhem, 1860. b - H. Riedel, Het Middelbaar Onderwijs, Tijdspiegel, 1862. c - D. J. Séyn Parvé, Overzicht van de Hoogere Burgerscholen en Burgerscholen, bij het einde van 1868, De Economist, 1869. d - Staatkundig en Staathuishoudkundig Jaarboekje voor 1865, Amsterdam. A. J. Vitringa is of opinion that the modern languages, though deficiënt if compared with the classieal languages in providing exercise for the intellect, are superior as to the development of the mind. But if they were to yield that profit, modern languages should no longer be learned and taught for the sake of practical use for conversational and corresponding purposes, as they were at the French schools. He criticizes the last mentioned institutions very severely: the pupils learned hardly anything. Neither does he think much of the Latin schools, which suffered from the great number of small schools. Concentration would lead to greater efficiency and to the abolition of the ridiculously small schools such as were to be found in Friesland especially. Then there were those grammar schools that had got a second department, where mathematics and modern languages were taught. There were only 25 of these schools in 1860. The first were formed in 1838 (a. p. 181), but these institutions did not flourish, as parents did not trust them because they were practically mere appendices to the grammar schools. Hence they still preferred one of the numerous private schools where mathematics and modern languages were taught. How great this number was is clear from the fact that, apart