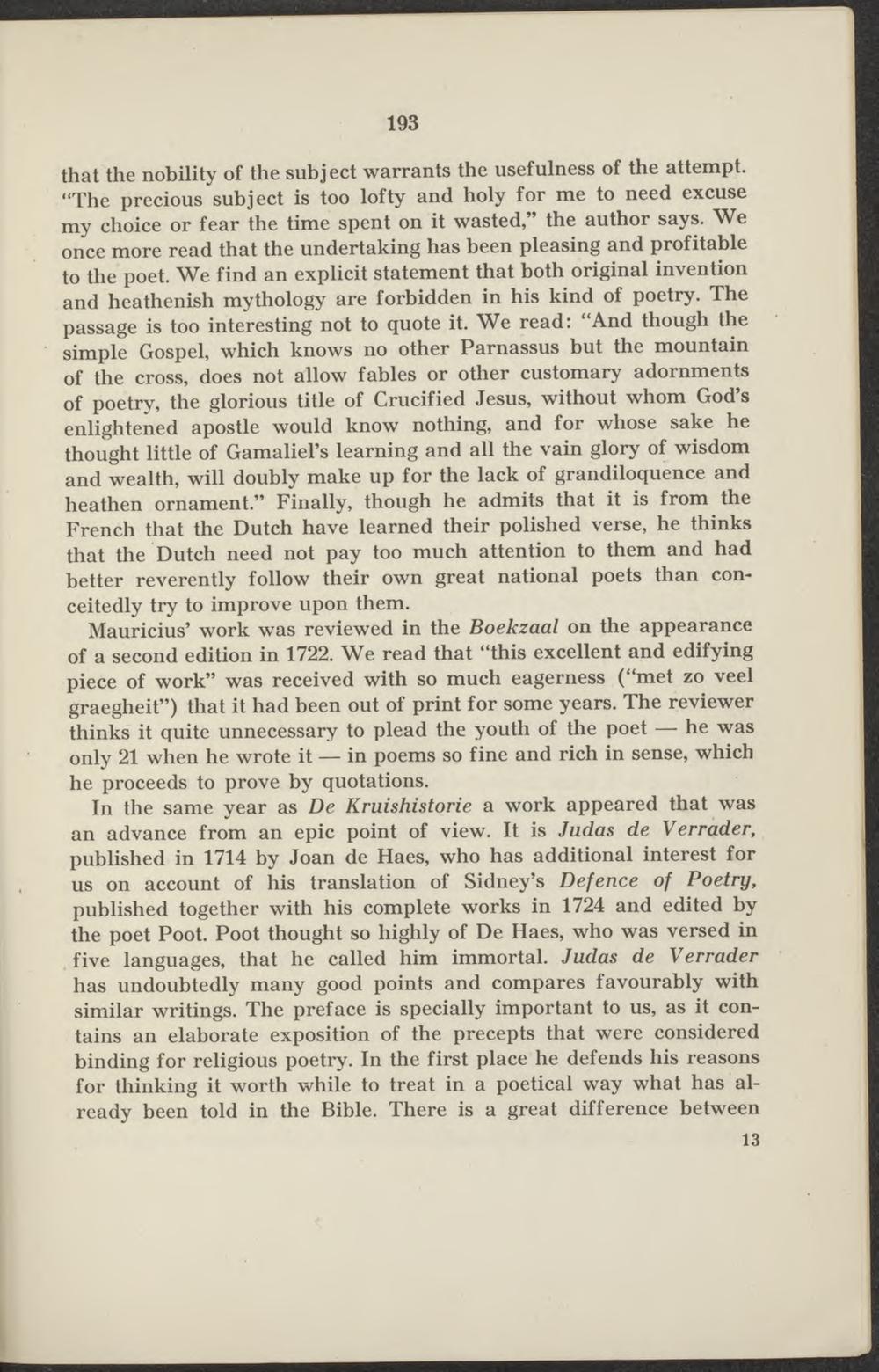 that the nobüity of the subject warrants the usefulness of the attempt. "The precious subject is too lofty and holy for me to need excuse my choice or fear the time spent on it wasted," the author says. We once more read that the undertaking has been pleasing and profitable to the poet. We find an explicit statement that both original invention and heathenish mythology are forbidden in his kind of poetry. The passage is too interesting not to quote it. We read: "And though the simple Gospel, which knows no other Parnassus but the mountain of the cross, does not allow fables or other customary adornments of poetry, the glorious title of Crucified Jesus, without whom God's enlightened apostle would know nothing, and for whose sake he thought little of Gamaliel's learning and all the vain glory of wisdom and wealth, will doubly make up for the lack of grandiloquence and heathen ornament." Finally, though he admits that it is from the French that the Dutch have learned their polished verse, he thinks that the Dutch need not pay too much attention to them and had better reverently follow their own great national poets than conceitedly try to improve upon them.

Mauricius' work was reviewed in the Boekzaal on the appearance of a second edition in 1722. We read that "this excellent and edifying piece of work" was received with so much eagerness ("met zo veel graegheit") that it had been out of print for some years. The reviewer thinks it quite unnecessary to plead the youth of the poet — he was only 21 when he wrote it — in poems so fine and rich in sense, which he proceeds to prove by quotations.

In the same year as De Kruishistorie a work appeared that was an advance from an epic point of view. It is Judas de Verrader, pubUshed in 1714 by Joan de Haes, who has additional interest for us on account of his translation of Sidney's Defence of Poetry, published together with his complete works in 1724 and edited by the poet Poot. Poot thought so highly of De Haes, who was versed in five languages, that he called him immortal. Judas de Verrader has undoubtedly many good points and compares favourably with similar writings. The pref ace is specially important to us, as it contains an elaborate exposition of the precepts that were considered binding for religious poetry. In the first place he defends his reasons for thinking it worth while to treat in a poetical way what has already been told in the Bible. There is a great dUference between