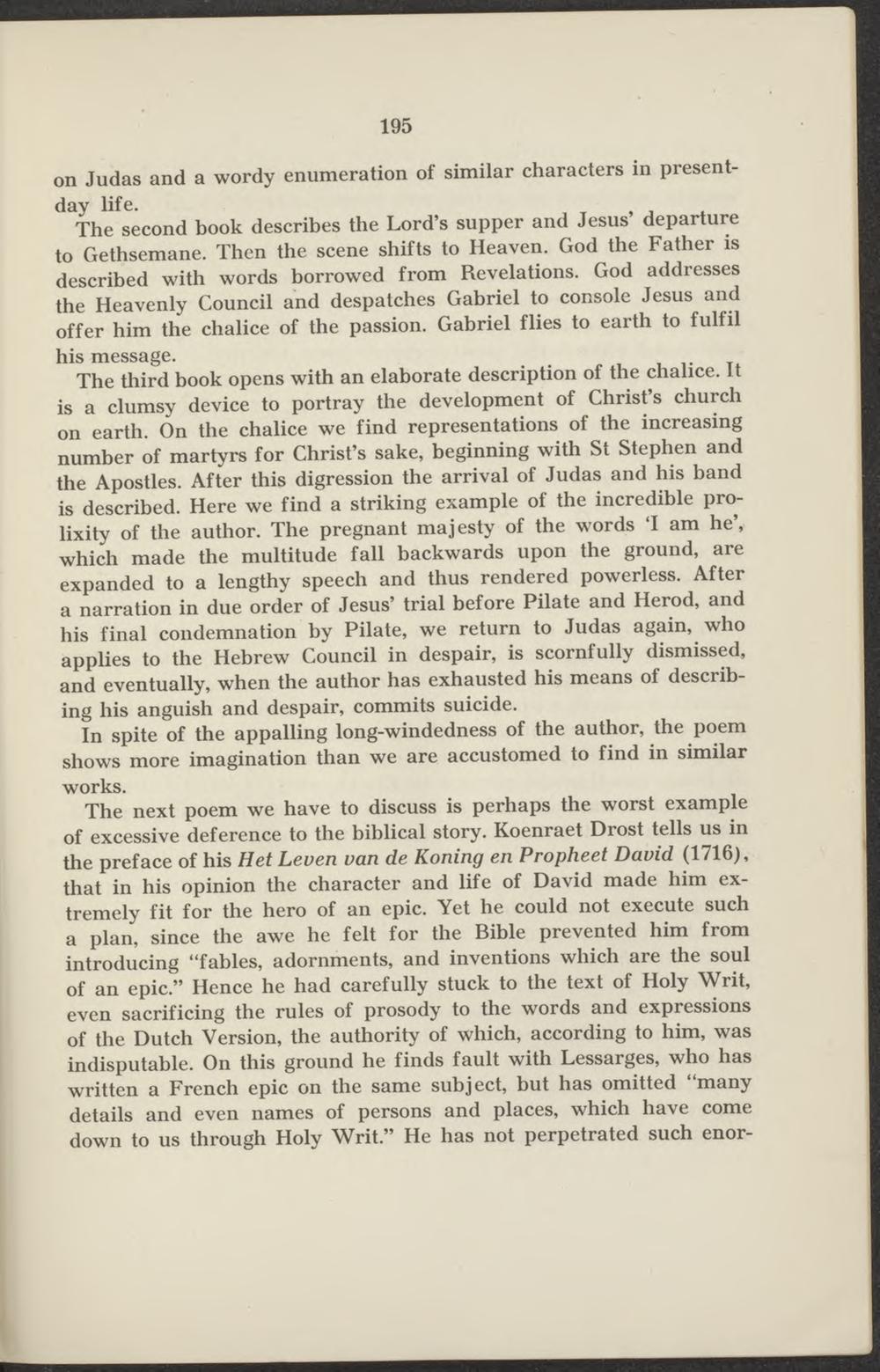 on Judas and a wordy enumeration of similar characters in presentday life.

The second book describes the Lord's supper and Jesus departure to Gethsemane. Then the scène shifts to Heaven. God the Father is described with words borrowed from Revelations. God addresses the Heavenly Council and despatches Gabriel to console Jesus and offer him the chalice of the passion. Gabriel flies to earth to fulfil his message.

The third book opens with an elaborate description of the chalice. lt is a clumsy device to portray the development of Christ's church on earth. On the chalice we find representations of the increasing number of martyrs for Christ's sake, beginning with St Stephen and the AposÜes. After this digression the arrival of Judas and his band is described. Here we find a striking example of the incredible prolixity of the author. The pregnant majesty of the words 'I am he', which made the multitude fall backwards upon the ground, are expanded to a lengthy speech and thus rendered powerless. After a narration in due order of Jesus' trial before Pilate and Herod, and his final condemnation by Pilate, we return to Judas again, who applies to the Hebrew Council in despair, is scornfully dismissed, and eventually, when the author has exhausted his means of describing his anguish and despair, commits suicide.

In spite of the appalling long-windedness of the author, the poem shows more imagination than we are accustomed to find in similar works.

The next poem we have to discuss is perhaps the worst example of excessive deference to the biblical story. Koenraet Drost tells us in the pref ace of his Het Leven van de Koning en Propheet David (1716), that in his opinion the character and life of David made him extremely fit for the hero of an epic. Yet he could not execute such a plan, since the awe he feit for the Bible prevented him from introducing "fables, adornments, and inventions which are the soul of an epic." Hence he had carefully stuck to the text of Holy Writ, even sacrificing the rules of prosody to the words and expressions of the Dutch Version, the authority of which, according to him, was indisputable. On this ground he finds fault with Lessarges, who has written a French epic on the same subject, but has omitted "many details and even names of persons and places, which have come down to us through Holy Writ." He has not perpetrated such enor-