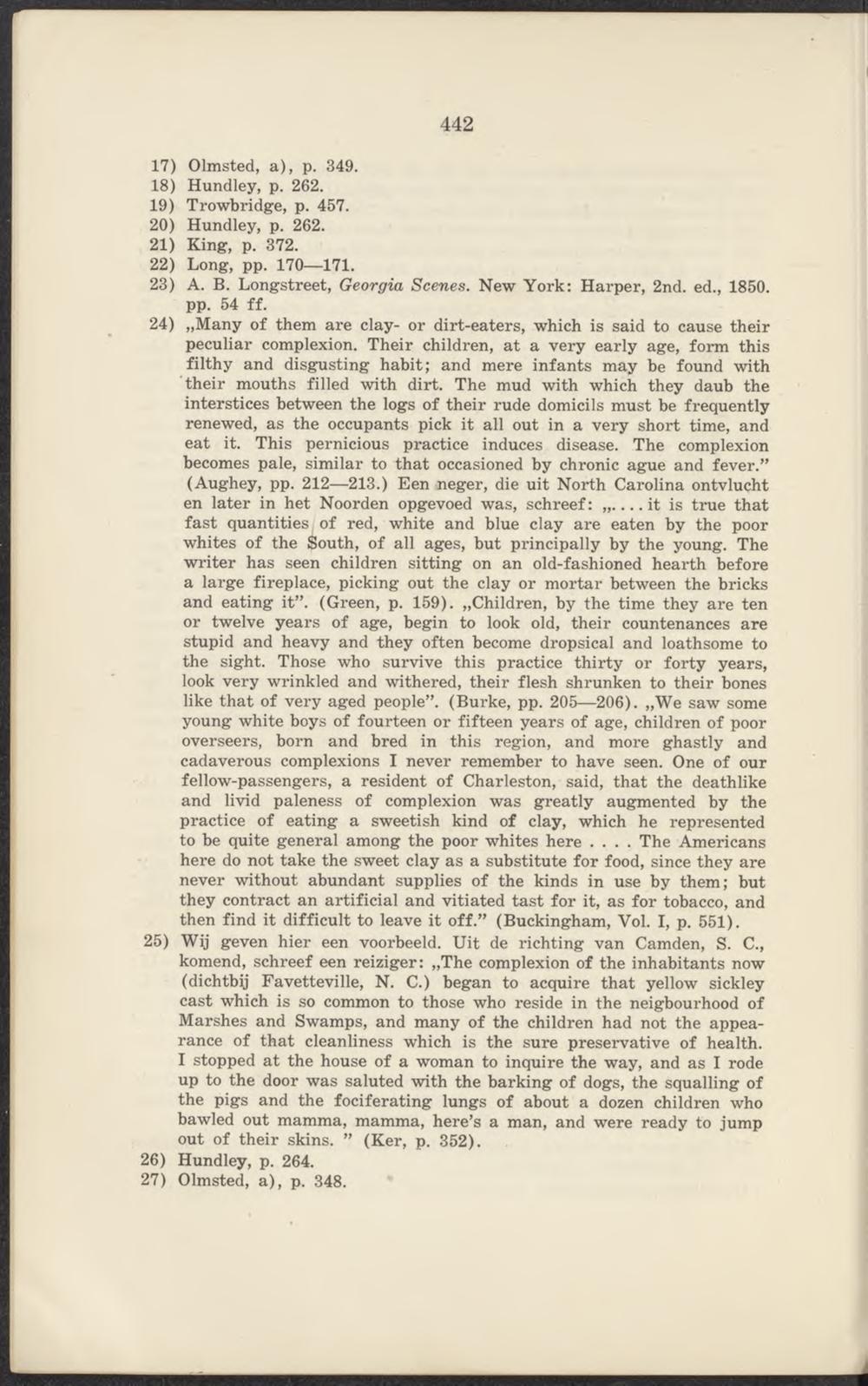 24) „Many of them are clay- or dirt-eaters, which is said to cause their peculiar complexion. Their children, at a very early age, form this filthy and disgusting habit; and mere infants may be found with

'their mouths filled with dirt. The mud with which they daub the interstices between the logs of their rude domicils must be frequently renewed, as the occupants piek it all out in a very short time, and eat it. This pernicious practice induces disease. The complexion becomes pale, similar to that occasioned by chronic ague and fever." (Aughey, pp. 212—213.) Een neger, die uit North Carolina ontvlucht

en later in het Noorden opgevoed was, schreef: „ it is true that

fast quantities / of red, white and blue clay are eaten by the poor whites of the South, of all ages, but principally by the young. The writer has seen children sitting on an old-fashioned hearth before a large fireplace, picking out the clay or mortar between the bricks and eating it". (Green, p. 159). „Children, by the time they are ten or twelve years of age, begin to look old, their countenances are stupid and heavy and they often become dropsical and loathsome to the sight. Those who survive this practice thirty or forty years, look very wrinkled and withered, their flesh shrunken to their bones like that of very aged people". (Burke, pp. 205—206). „We saw some young white boys of fourteen or fifteen years of age, children of poor overseers, born and bred in this region, and more ghastly and cadaverous complexions I never remember to have seen. One of our fellow-passengers, a resident of Charleston,-said, that the deathlike and livid paleness of complexion was greatly augmented by the practice of eating a sweetish kind of clay, which he represented to be quite general among the poor whites here .... The Americans here do not take the sweet clay as a substitute for food, since they are never without abundant supplies of the kinds in use by them; but they contract an artificial and vitiated tast for it, as for tobacco, and then find it difficult to leave it off." (Buckingham, Vol. I, p. 551).

25) Wü geven hier een voorbeeld. Uit de richting van Camden, S. C, komend, schreef een reiziger: „The complexion of the inhabitants now (dichtbij Favetteville, N. C.) began to acquire that yellow sickley cast which is so common to. those who reside in the neigbourhood of Marshes and Swamps, and many of the children had not the appearance of that cleanliness which is the snre preservative of health. I stopped at the house of a woman to inquire the way, and as I rode up to the door was saluted with the barking of dogs, the squalling of the pigs and the fociferating lungs of about a dozen children who bawled out mamma, mamma, here's a man, and were ready to jump out of their skins. " (Eer, p. 352).