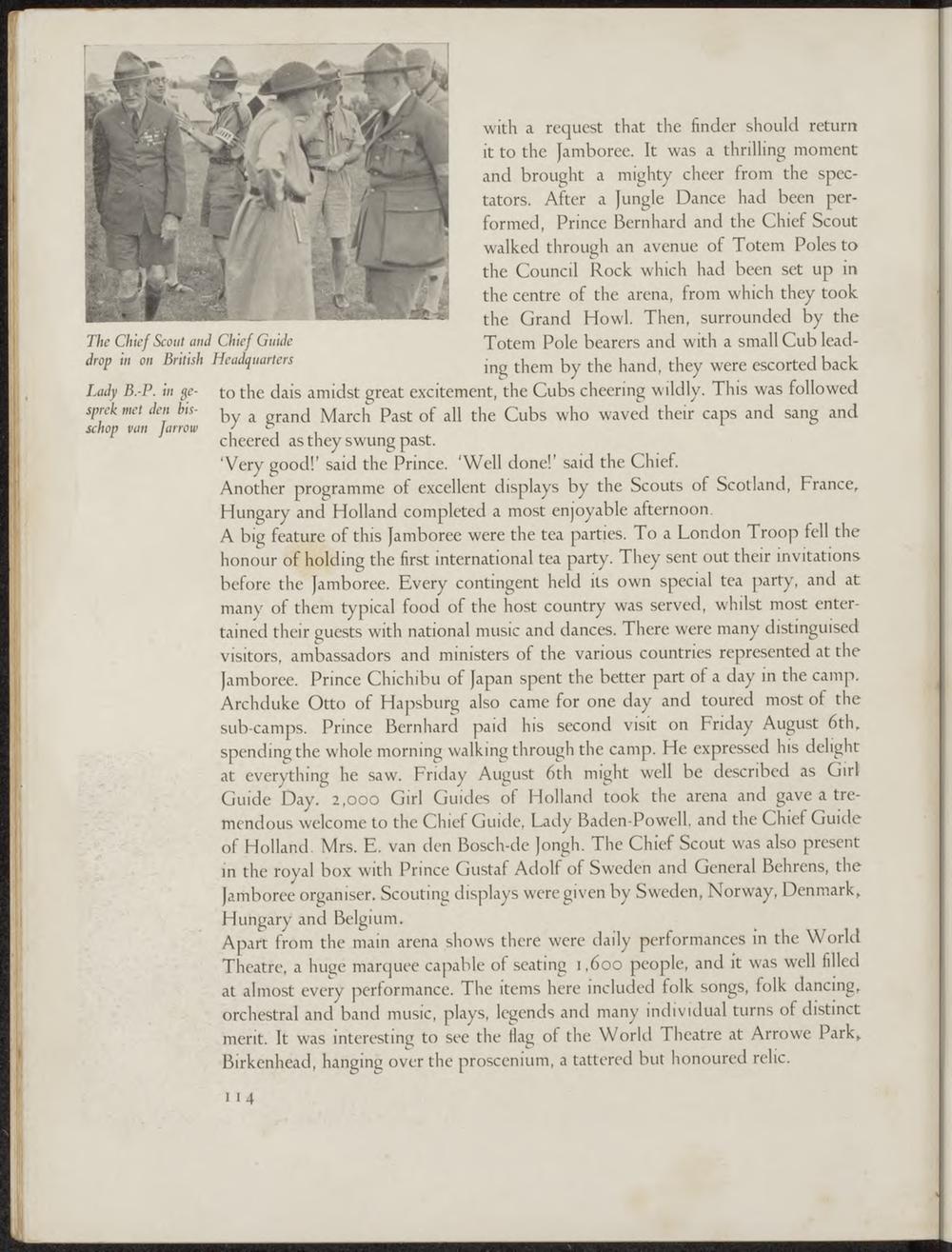 with a request that the finder should return it to the Jamboree. It was a thrilling moment and brought a mighty cheer from the spectators. After a Jungle Dance had been performed, Prince Bernhard and the Chief Scout walked through an avenue of Totem Poles to the Council Rock which had been set up in the centre of the arena, from which they took the Grand Howl. Then, surrounded by the

drop in on British Headquarters £ng them by the hand, they were escorted back

Lady B.-P. in ge- to the dais amidst great excitement, the Cubs cheering wildly. This was followed

cheered as they swung past.

Another programme of excellent displays by the Scouts of Scotland, France, Hungary and Holland completed a most enjoyable afternoon.

A big feature of this Jamboree were the tea partjes. To a London Troop feil the honour of holding the first international tea party. They sent out their invitations before the Jamboree. Every contingent held its own special tea party, and at many of them typical food of the host country was served, whilst most entertained their guests with national music and dances. There were many distinguised visitors, ambassadors and ministers of the various countries represented at the Jamboree. Prince Chichibu of Japan spent the better part of a day in the camp. Archduke Otto of Hapsburg also came for one day and toured most of the sub-camps. Prince Bernhard paid his second visit on Friday August 6th, spendingthe whole morning walking through the camp. He expressed his delight at everything he saw. Friday August 6th might well be described as Girl Guide Day. 2,000 Girl Guides of Holland took the arena and gave a treinend ous welcome to the Chief Guide, Lady Baden-Powell, and the Chief Guide of Holland. Mrs. E. van den Bosch-de Jongh. The Chief Scout was also present in the royal box with Prince Gustaf Adolf of Sweden and General Behrens, the Jamboree organiser. Scouting displays weregiven by Sweden, Norway, Denmark, Hungary and Belgium.

Apart from the main arena shows there were daily performances in the World Theatre, a huge marquee capable of seating 1,600 people, and it was well filled at almost every performance. The items here included folk songs, folk dancing, orchestral and band music, plays, legends and many mdividual turns of distinct merit. It was interestmg to see the flag of the World Theatre at Arrowe Park, Birkenhead, hanging over the proscenium, a tattered but honoured relic.