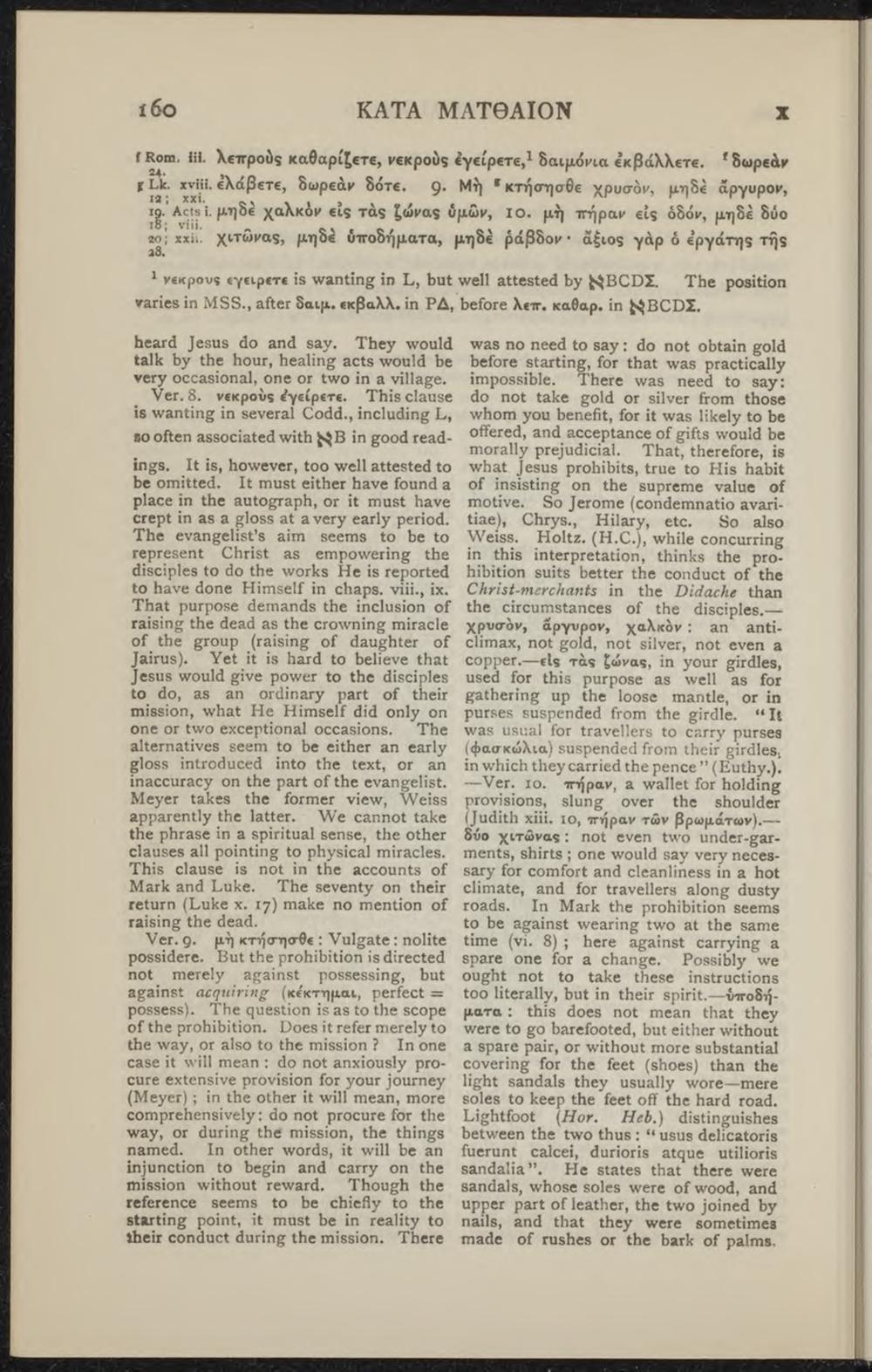 heard Jesus do and say. They would fcalk by the hour, healing acts would be very occasional, one or two in a village.

Ver. 8. vcKpovs £yc£pcrc. This clause is wanting in several Codd., including L, 80 often associated with in good read-

ings. It is, however, too well attested to be omitted. It must either have found a place in the autograph, or it must have crept in as a gloss at avery early period. The evangelist's aim seems to be to represent Christ as empowering the disciples to do the works He is reported to have done Himself in chaps. viii., ix. That purpose demands the inclusion of raising the dead as the crowning miracle of the group (raising of daughter of Jairus). Yet it is hard to believe that Jesus would give power to the disciples to do, as an ordinary part of their mission, what He Himself did only on one or two exceptional occasions. The alternatives seem to be either an early gloss introduced into the text, or an inaccuracy on the part of the evangelist. Meyer takes the former view, Weiss apparently the latter. We cannot take the phrase in a spiritual sense, the other clauses all pointing to physical miracles. This clause is not in the accounts of Mark and Luke. The seventy on their return (Luke x. 17) make no mention of raising the dead.

Ver. 9. |at) KT^<rr]<r0€ : Vulgate: nolite possidere. But the prohibition is directed not merely against possessing, but against acquiring (K€KT-r]p,ai, perfect = possess). The question is as to the scope of the prohibition. Does it refer merely to the way, or also to the mission ? In one case it will mean : do not anxiously procure extensive provision for your journey (Meyer) ; in the other it will mean, more comprehensively: do not procure for the way, or during the mission, the things named. In other words, it will be an injunction to begin and carry on the mission without reward. Though the reference seems to be chiefly to the starting point, it must be in reality to Sheir conduct during the mission. There

was no need to say: do not obtain gold before starting, for that was practically impossible. There was need to say: do not take gold or silver from those whom you benefit, for it was likely to be offered, and acceptance of gifts would be morally prejudicial. That, therefore, is what jesus prohibits, true to His habit of insisting on the supreme value of motive. So Jerome (condemnatio avaritiae), Chrys., Hilary, etc. So also Weiss. Holtz. (H.C.), while concurring in this interpretation, thinks the prohibition suits better the conduct of the Christ-merchants in the Didache than the circumstances of the disciples.— Xpvtrov, apyupov, xa^Kov ' an anticlimax, not gold, not silver, not even a copper.—cis tols £wvas, in your girdles, used for this purpose as well as for gathering up the loose mantle, or in purses suspended from the girdle. "It was usual for travellers to carry purses (<f>atrK(óX.ia) suspended from their girdles. in which they carried the pence " (Euthy.). —Ver. 10. mjpav, a wallet for holding provisions, slung over the shoulder (Judith xiii. 10, mjpav twv Ppco|xaT«v).— 8vo x""ó)vas : not even two under-garments, shirts ; one would say very necessary for comfort and cleanliness in a hot climate, and for travellers along dusty roads. In Mark the prohibition seems to be against wearing two at the same time (vi. 8) ; here against carrying a spare one for a change. Possibly we ought not to take these instructions too literally, but in their spirit.—vitoSt}p-aTa : this does not mean that they were to go barefooted, but either without a spare pair, or without more substantial covering for the feet (shoes) than the light sandals they usually wore—mere soles to keep the feet off the hard road. Lightfoot {Hor. Heb.) distinguishes between the two thus : " usus delicatoris fuerunt calcei, durioris atque utilioris sandalia". He states that there were sandals, whose soles were of wood, and upper part of leather, the two joined by nails, and that they were sometimes made of rushes or the bark of palms.