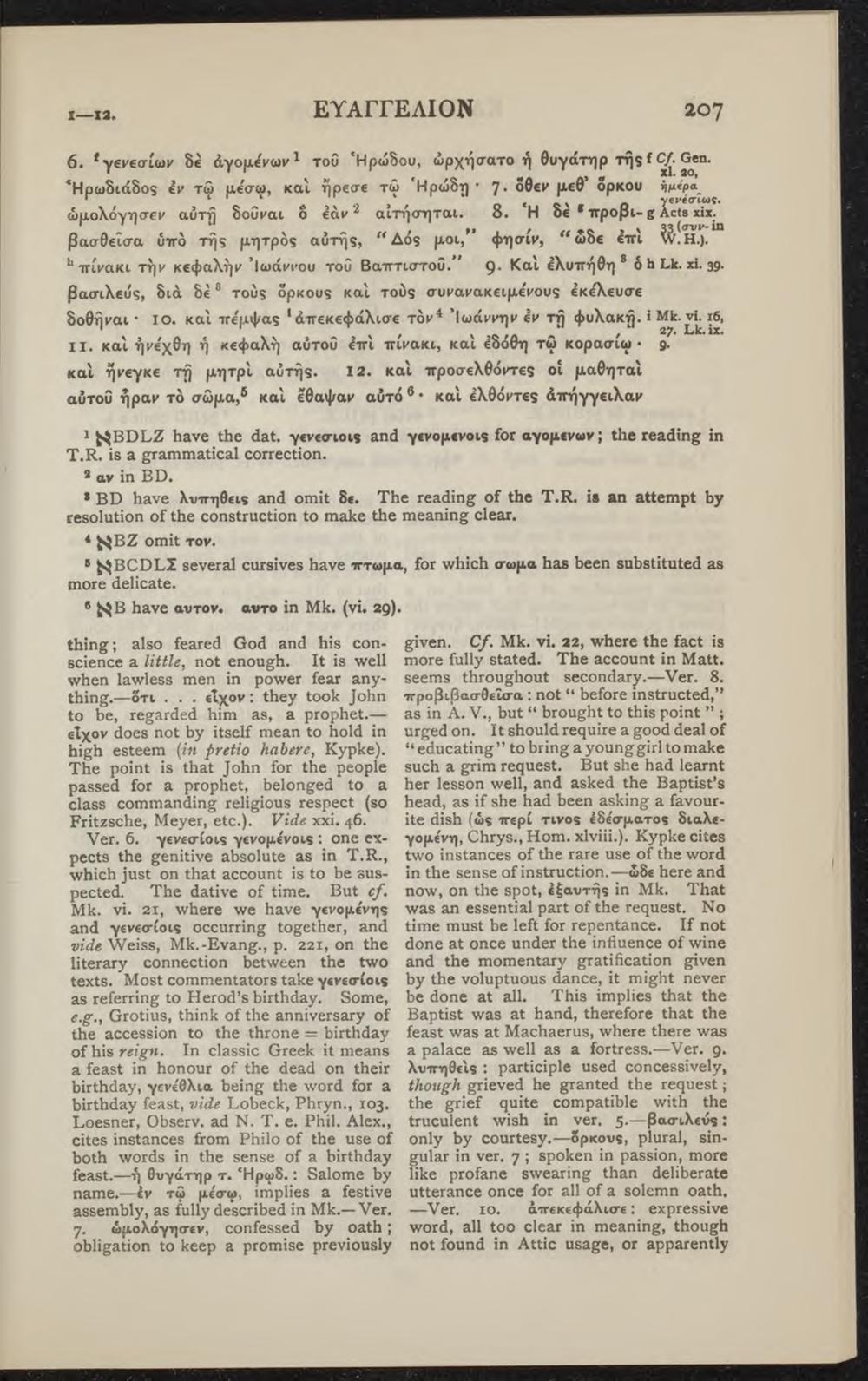 » BD have Xuiri]9ti.s and omit 8«. The reading of the T.R. is an attempt by resolution of the construction to make the meaning clear.

thing; also feared God and his conscience a little, not enough. It is well when lawless men in power fear anything.—oti . . . €lxov : they took John to be, regarded him as, a prophet.— clxov does not by itself mean to hold in high esteem (in pretio haberc, Kypke). The point is that John for the people passed for a prophet, belonged to a class commanding religious respect (so Fritzsche, Meyer, etc.). Vide xxi. 46.

Ver. 6. YcvetrÉois "yevojxevois : one expects the genitive absolute as in T.R., which just on that account is to be suspected. The dative of time. But cf. Mk. vi. 21, where we have YcvojjiévTjs and *y€V€<rtois occurring together, and vide Weiss, Mk.-Evang., p. 221, on the literary connection between the two texts. Most commentators take ycvetrtois as referring to Herod's birthday. Some, e.g.f Grotius, think of the anniversary of the accession to the throne = birthday ofhisrtf/g'M. In classic Greek it means a feast in honour of the dead on their birthday, Yevé0Xia being the word for a birthday feast, vide Lobeck, Phryn., 103. Loesner, Observ. ad N. T. e. Phil. Alex., cites instances firom Philo of the use of both words in the sense of a birthday feast.—■?) ovyattjp t. 'HpwS.: Salome by name.—Iv tw (letru, implies a festive assembly, as fully described in Mk.—Ver. 7. w{A.oXóyncr€v, confessed by oath; obligation to keep a promise previously

given. Cf. Mk. vi. 22, where the fact is more fully stated. The account in Matt. seems throughout secondary.—Ver. 8. irpo{3i{3acr0€uja : not " before instructed," as in A. V., but " brought to this point " ; urged on. It should require a good deal of " educating " to bring a young girl to make such a grim request. But she had learnt her lesson well, and asked the Baptist's head, as if she had been asking a favourite dish (ws ircpt tivos csetrfxatos StaXc"yofAcvrj, Chrys., Hom. xlviii.). Kypke cites two instances of the rare use of the word in the sense of instruction.—wSc here and now, on the spot, 4£avTr}s in Mk. That was an essential part of the request. No time must be left for repentance. If not done at once under the infiuence of wine and the momentary gratification given by the voluptuous dance, it might never be done at all. This implies that the Baptist was at hand, therefore that the feast was at Machaerus, where there was a palace as well as a fortress.—Ver. 9. Xvir-rjöcis : participle used concessively, though grieved he granted the request; the grief quite compatible with the truculent wish in ver. 5.—Pao-iXevs : only by courtesy.—opicovs, plural, singular in ver. 7 ; spoken in passion, more like profane swearing than deliberate utterance once for all of a solemn oath. —Ver. 10. air6Ke<j>aXi<r€: expressive word, all too clear in meaning, though not found in Attic usage, or apparently