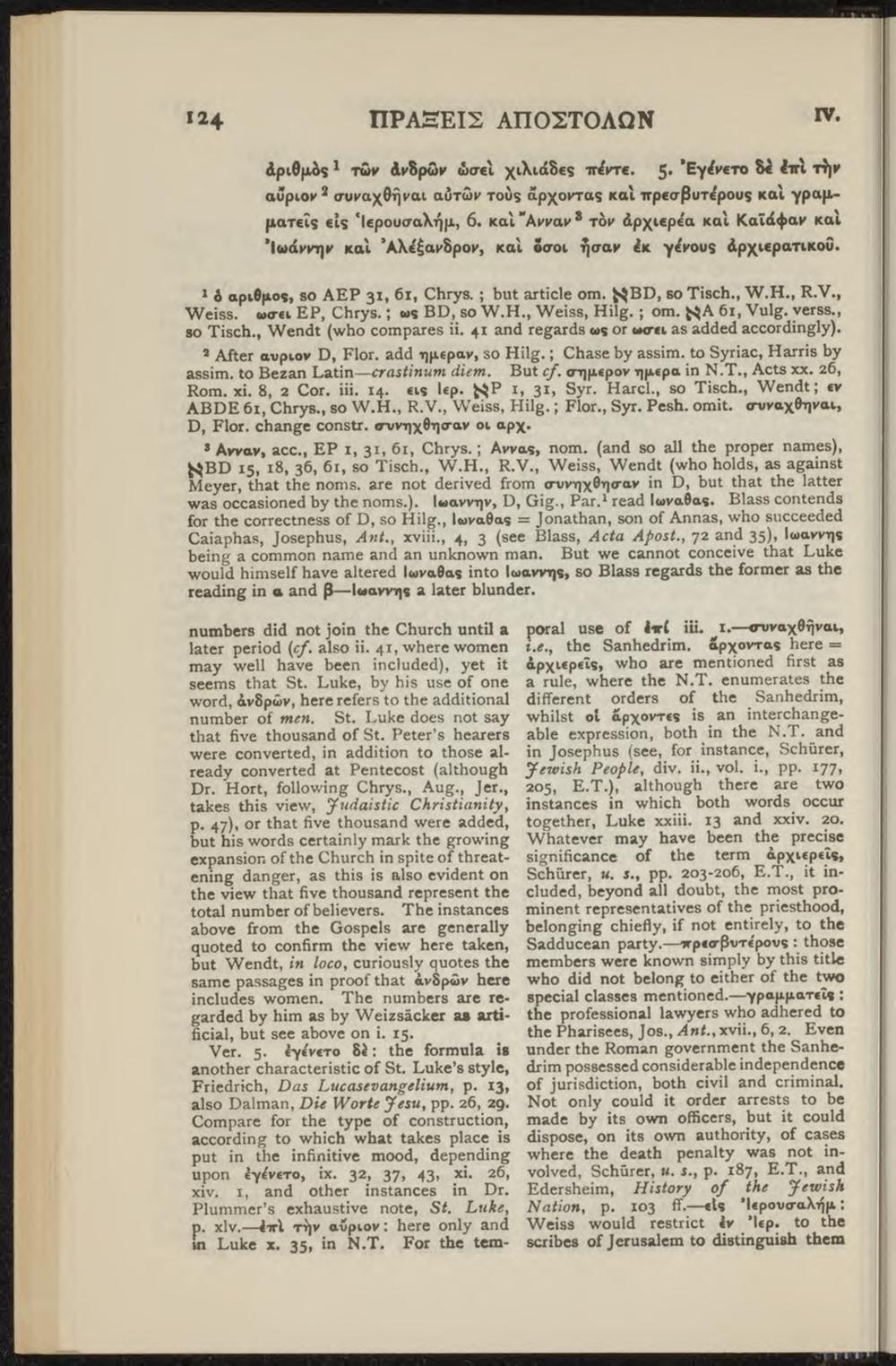 numbers did not join the Church until a later period (cf. also ii. 41, where women may well have been included), yet it seems that St. Luke, by his use of one word, avSpüv, here refers to the additional number of men. St. Luke does not say that five thousand of St. Peter's hearers were converted, in addition to those already converted at Pentecost (although Dr. Hort, following Chrys., Aug., Jer., takes this view, Judaistic Christianity, p. 47), or that five thousand were added, but his words certainly mark the growing expansior, of the Church in spite of threatening danger, as this is also evident on the view that five thousand represent the total number of believers. The instances above from the Gospels are generally quoted to confirm the view here taken, but Wendt, in loco, curiously quotes the same passages in proof that avSpuv here includes women. The numbers are regarded by him as by Weizsacker as artificial, but see above on i. 15.

poral use of 1*C iii. 1.—OTJvaxÖTjvai, t.e., the Sanhedrim. Spxotras here = apxtfpeïs, who are mentioned first as a rule, where the N.T. enumerates the different orders of the Sanhedrim, whilst ot apxovTcs is an interchangeable expression, both in the N.T. and in Josephus (see, for instance, Schürer, Jewish People, div. ii., vol. i., pp. 177, 205, E.T.), although there are two instances in which both words occui together, Luke xxiii. 13 and xxiv. 20. Whatever may have been the precise significance of the term apxieptts, Schürer, u. s., pp. 203-206, E.T., it included, beyond all doubt, the most prominent representatives of the priesthood, belonging chiefly, if not entirely, to the Sadducean party.—wpco-pvrépovs ■ those members were known simply by this title who did not belong to either of the two special classes mentioned.—YpajipaTftï : the professional lawyers who adhered to the Pharisees, Jos., Ant.,xvii., 6, 2. Even under the Roman government the Sanhedrim possessed considerable independence of jurisdiction, both civil and criminal. Not only could it order arrests to be made by its own officers, but it could dispose, on its own authority, of cases where the death penalty was not involved, Schürer, m. j., p. 187, E.T., and Edersheim, H1 story of the Jewish Nation, p. 103 ff.—eW 'Itpovo-oXijp.: Weiss would restrict tv 'Itp. to the scribes of Jerusalem to distinguish them