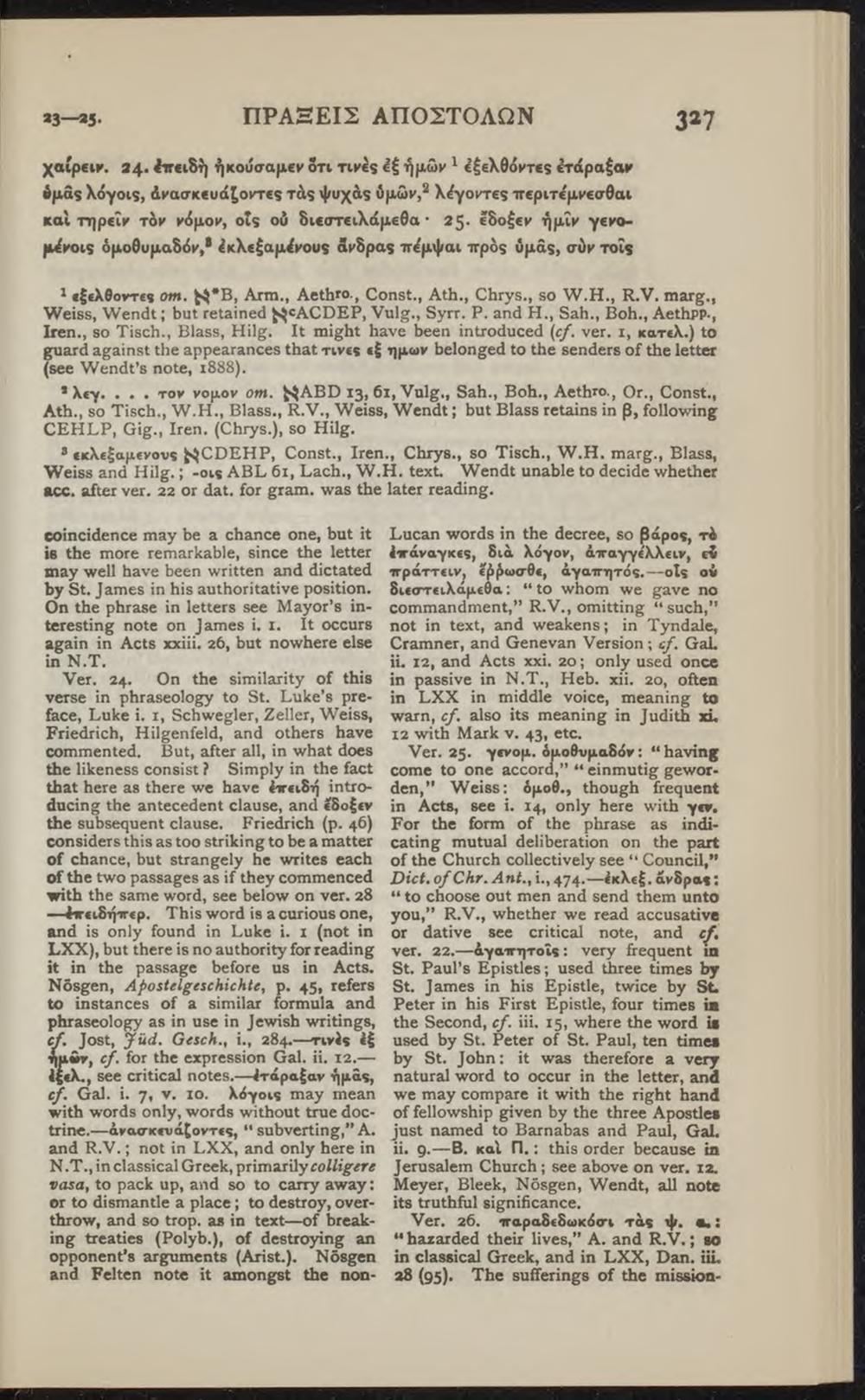 eoincidence may be a chance one, but it ie the more remarkable, since the letter may well have been written and dictated by St. James in his authoritative position. On the phrase in letters see Mayor's interesting note on James i. 1. It occurs again in Acts xxiii. 26, but nowhere else in N.T.

Ver. 24. On the similarity of this verse in phraseology to St. Luke's preface, Luke i. 1, Schwegler, Zeiler, Weiss, Friedrich, Hilgenfeld, and others have commented. But, after all, in what does the likeness consist ? Simply in the fact that here as there we have ftrckSi] introducing the antecedent clause, and c8o£cv the subsequent clause. Friedrich (p. 46) considers this as too striking to be a matter of chance, but strangely he writes each of the two passages as if they commenced with the same word, see below on ver. 28

iwciS-qirtp. This word is a curious one, and is only found in Luke i. 1 (not in LXX), but there is no authority for reading it in the passage before us in Acts. Nösgen, Apostelgeschichte, p. 45, refers to instances of a similar formula and phraseology as in use in Jewish writings, cf. Jost, Jüd. Gesch.% i., 284.—Tiris 'Miwr, cf. for the expression Gal. ii. 12.— i|cX., see critical notes.—4rdpa£av rjfias, cf. Gal. i. 7, v. 10. X6701S may mean with words only, words without true doctrine.—dKa<nccud£ovT€s, " subverting," A. and R.V.; not in LXX, and only here in N.T., in classical Greek, primarily colligere vasa, to pack up, and so to carry away: or to dismantle a place; to destroy, overthrow, and so trop. as in text—of breaking treaties (Polyb.), of destroying an opponent's arguments (Arist.). Nösgen and Feiten note it amongst the non-

Ver. 25. 7«vo(i. óaodvpaSdv: " having come to one accord," " einmutig geworden," Weiss: ojiod., though frequent in Acts, see i. 14, only here with yc*. For the form of the phrase as indicating mutual deliberation on the part of the Church collectively see " Council," Dict. of Chr. Ant.y i., 474.—cicXc^. avSpat: 44 to choose out men and send them unto you," R.V., whether we read accusative or dative see critical note, and cf, ver. 22.—dyair-qTois: very frequent m St. Paul's Epistles; used three times by St. James in his Epistle, twice by St. Peter in his First Epistle, four times ia the Second, cf. iii. 15, where the word is used by St. Peter of St. Paul, ten times by St. John: it was therefore a very natural word to occur in the letter, and we may compare it with the right hand of fellowship given by the three Apostles just named to Barnabas and Paul, Gal. ii. 9.—B. Kal □.: this order because in Jerusalem Church; see above on ver. 12. Meyer, Bleek, Nösgen, Wendt, all note its truthful significance.