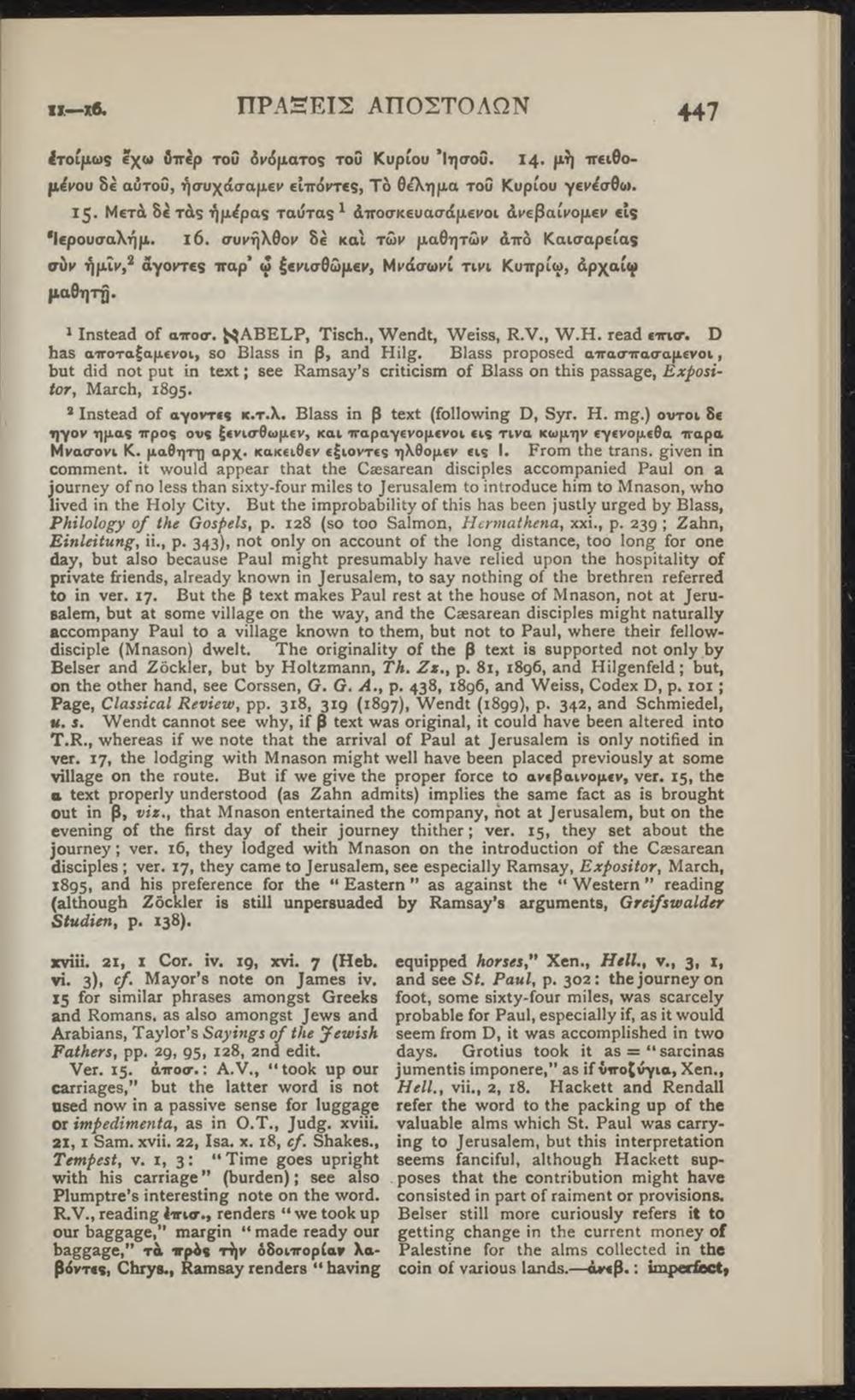 1 Instead of airo<r. ^ABELP, Tisch., Wendt, Weiss, R.V., W.H. read cirur. D has airoTa|afX€voi, so Blass in p, and Hilg. Blass proposed airao-irao-afievoi, but did not put in text; see Ramsay's criticism of Blass on this passage, Expositor, March, 1895.

2 Instead of a-yovtt* k.t.X. Blass in |3 text (following D, Syr. H. mg.) ovtoi 8c Tjyov T]p.as irpos ovs £cvicr0w|A€v, Kat irapaYEVopcvoi cis Tiva koijx^v €Y€vo}j.€0a Trapa Mvaaovi K. paO-ijT^) apx» KaKeiöev c^iovtcs tj\0ojjl€V ets I. From the trans, given in comment. it would appear that the Cassarean disciples accompanied Paul on a journey of no less than sixty-four miles to Jerusalem to introducé him to Mnason, who lived in the Holy City. But the improbability of this has been justly urged by Blass, Philology of the Gospels, p. 128 (so too Salmon, Hermathena, xxi., p. 239 ; Zahn, Einleitungy ii., p. 343), not only on account of the long distance, too long for one day, but also because Paul might presumably have relied upon the hospitality of private friends, already known in Jerusalem, to say nothing of the brethren referred to in ver. 17. But the p text makes Paul rest at the house of Mnason, not at Jerusalem, but at some village on the way, and the Csesarean disciples might naturally accompany Paul to a village known to them, but not to Paul, where their fellowdisciple (Mnason) dwelt. The originality of the f3 text is supported not only by Belser and Zöckler, but by Holtzmann, Th. Zx.% p. 81, 1896, and Hilgenfeld; but, on the other hand, see Corssen, G. G. A., p. 438, 1896, and Weiss, Codex D, p. 101 ; Page, Classical Rcview, pp. 318, 319 (1897), Wendt (1899), p. 342, and Schmiedel, u. 1. Wendt cannot see why, if P text was original, it could have been altered into T.R., whereas if we note that the arrival of Paul at Jerusalem is only notified in ver. 17, the lodging with Mnason might well have been placed previously at some village on the route. But if we give the proper force to av<{3aivopcv, ver. 15, the a text properly understood (as Zahn admits) implies the same fact as is brought out in fi, vit., that Mnason entertained the company, not at Jerusalem, but on the evening of the first day of their journey thither; ver. 15, they set about the journey; ver. 16, they Iodged with Mnason on the introduction of the Cassarean disciples ; ver. 17, they came to Jerusalem, see especially Ramsay, Expositor, March, 1895, and his preference for the " Eastern " as against the " Western " reading (although Zöckler is still unpersuaded by Ramsay's arguments, Greifswalder Studiën, p. 138).

equipped horses," Xen., Heil., v., 3, 1, and see St. Paul, p. 302: the journey on foot, some sixty-four miles, was scarcely probable for Paul, especially if, as it would seem from D, it was accomplished in two days. Grotius took it as = " sarcinas jumentis imponere," as if iirojvyia, Xen., Heil., vii., 2, 18. Hackett and Rendall refer the word to the packing up of the valuable alms which St. Paul was carrying to Jerusalem, but this interpretation seems fanciful, although Hackett supposes that the contribution might have consisted in part of raiment or provisions. Belser still more curiously refers it to getting change in the current money of Palestine for the alms collected in the coin of various lands.—ówf).: imperfect,