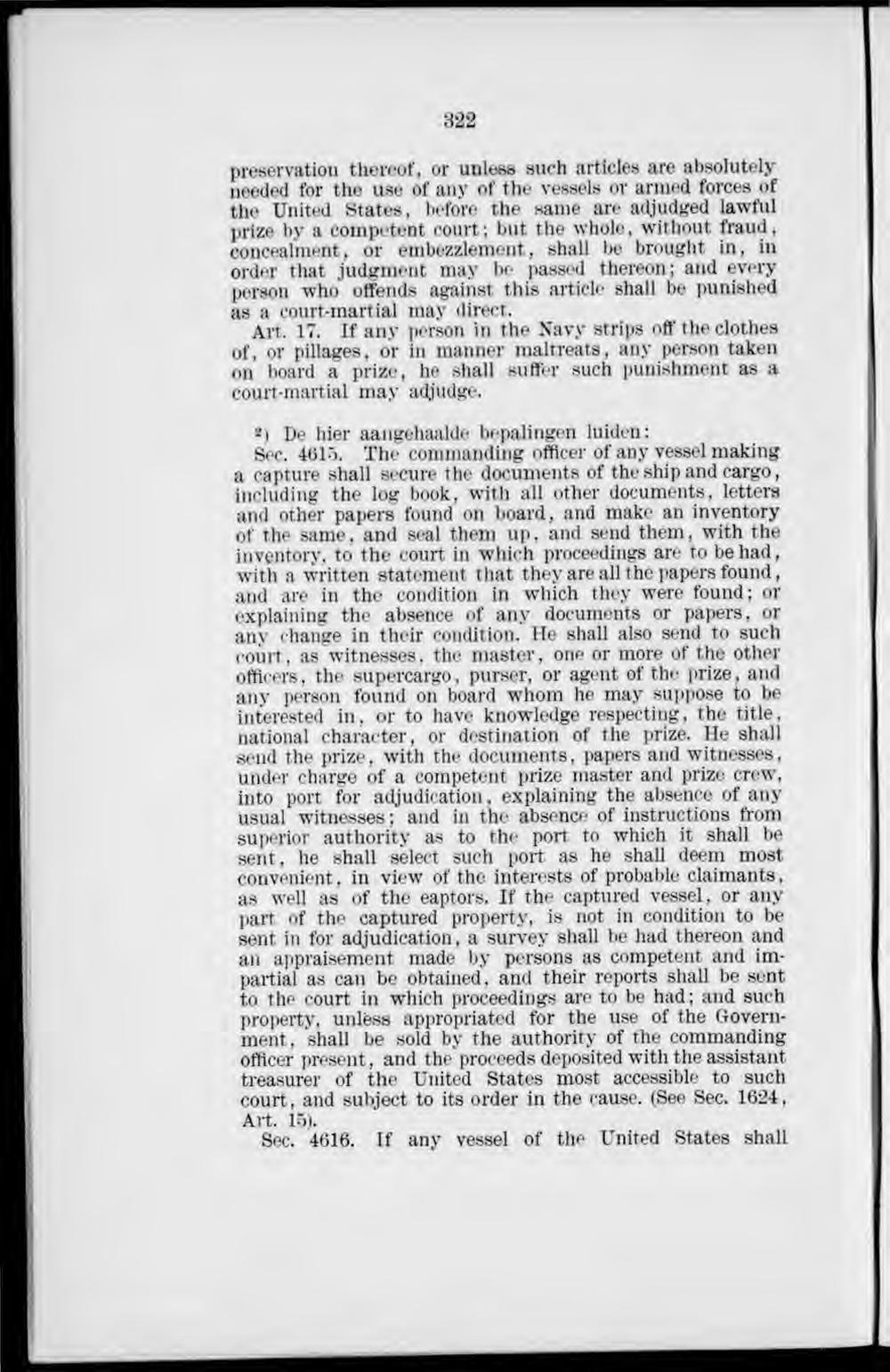 preservation thereof, or unless such articles are absolutely needed for the use of any of the vessels ov armed forces of the United States, before the same are adjudged lawful prize by a competent court; but the whole, without fraud, concealment, or embezzlement, shall be brought in, in order that judgment may be passed thereon; and every person who offends against this article shall be punished as a court-martial may direct.

Art. 17. If any person in the Navy strips off theclothes of, or pillages, or in manner maltreats, any person taken on board a prize, he shall suffer such punishment as a court-martial may adjudge.

Sec. 4615. The commanding officer of any vessel making a capture shall secure the documents of the ship and cargo, including the log book, with all other documents, letters and other papers found on board, and make an inventory of the same, and seal them up, and send them, with the inventory, to the court in which proceedings are to be had, with a written statement that they are all the papers found, and are in the condition in which they were found; or explaining the absence of any documents or papers, or any change in their condition. He shall also send to such court, as witnesses, the master, one or more of the other officers, the supercargo, purser, or agent of the prize, and any person found on board whom he may suppose to be interested in, or to have knowledge respecting, the title, national character, or destination of the prize. He shall send the prize, with the documents, papers and witnesses, under charge of a competent prize master and prize crew, into port for adjudication, explaining the absence of any usual witnesses; and in the absence of instructions from superior authority as to the port to which it shall be sent, he shall select such port as he shall deem most convenient, in view of the interests of probable claimants, as well as of the eaptors. If the captured vessel, or any part of the captured property, is not in condition to be sent in for adjudication, a survey shall be had thereon and an appraisement made by persons as competent and impartial as can be obtained, and their reports shall be sent to the court in which proceedings are to be had; and such property, unléss appropriated for the use of the Government, shall be sold by the authority of the commanding officer present, and the proceeds deposited with the assistant treasurer of the United States most accessible to such court, and subject to its order in the cause. (See Sec. 1624, Art. 15).

Sec. 4616. If any vessel of the United States shall