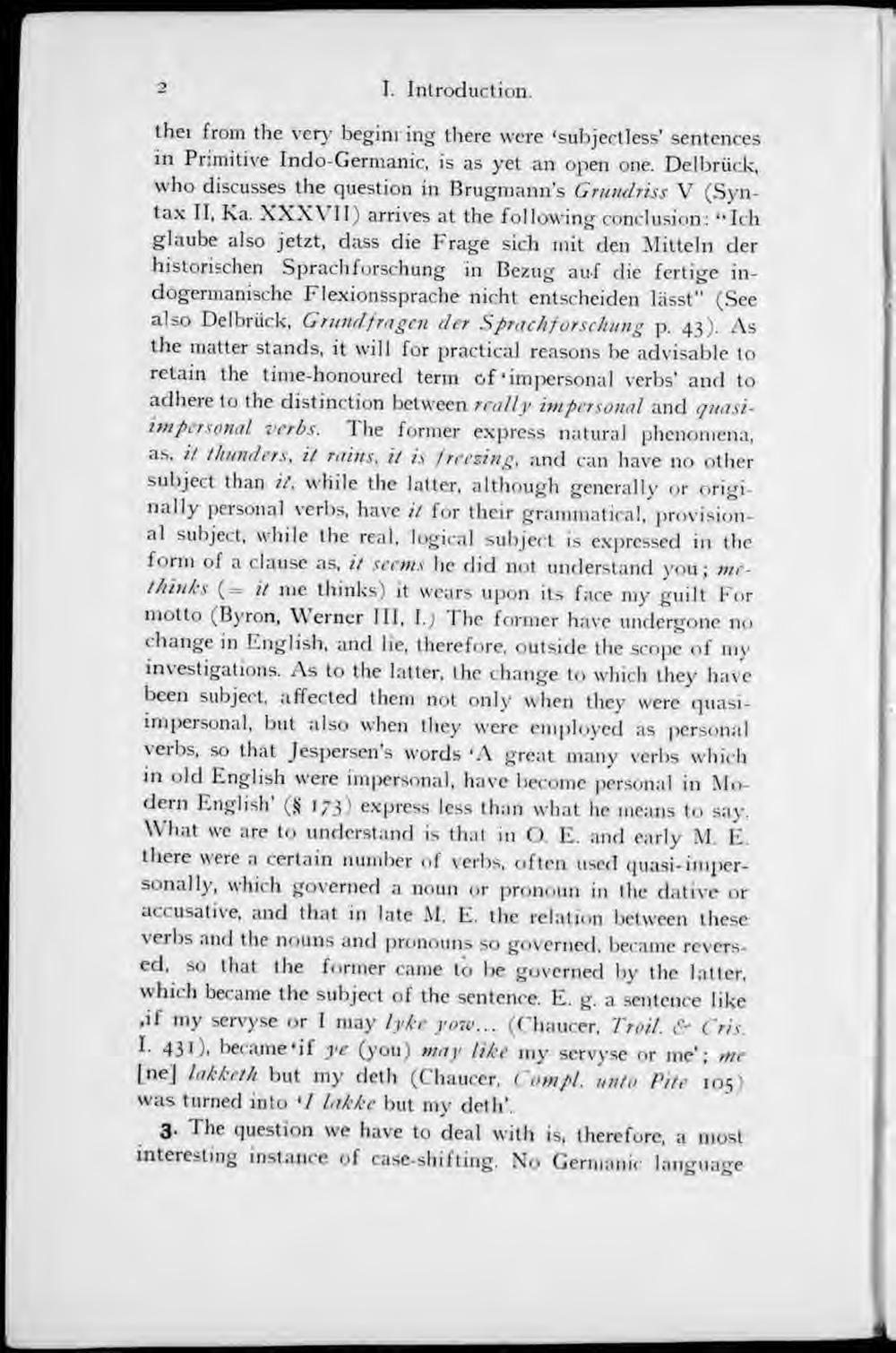 thei from the very begini ing there were 'subjectless' sentcnces in Primitive Indo-Germanic, is as yet an open one. Delbrück, who discusses the question in Brugmann's Grundriss V (Syntax II, Ka. XXX\ II) arrivés at the following conclusion: "Ich glaube also jetzt, dass die Frage sich mit den Mitteln der historischen Sprachforschung m Bezug aii'f die fertige indogermanische Flexionssprache nicht entscheiden liisst" (See also Delbrück, Grundfragen der Sprachforschung p. 43). As the matter stands, it will for practical reasons be advisable to retain the time-honoured term of 'impersonal verbs' and to adhere to the distinction between really impersonal and quasiimpersonal verbs. 1 he former express natural phenomena, as, it ttuinders, it rains, it is freesing, and can have 110 other subject than it, while the latter, although generally or originally personal verbs, have it for their grammatica!, provisional subject, while the real, logical subject is expressed in the form of a clause as, it seems he clid not understand you; methinks (= it me thinks) it wears upon its face my guilt For motto (Byron, Werner III, I.) I he former have undergone no change in English, and lie, therefore, outside the scope of my investigations. As to the latter, the change to which they have been subject, affected them not only when they were quasinnpersonal, but also when they were employed as personal veibs, so that Jespersen s vvords 'A great many verbs which in old English were impersonal, have become personal in Modern English (i$ 173) express less than what he means to say. Wh at we are to understand is that in O. E. and early M. E. there were a certain number of verbs, often used quasi-impersonally, which governed a noun or pronoun in the dative or accusative, and that in late M. E. the relation between these verbs and the nouns and pronouns so governed, became reversed, so that the former came to be governed by the latter, which became the subject of the sentence. E. g. a sentence like ,if my servyse or I may lyke yow... (Chaucer, Troil. & Cris. I- 430. became'if ye (you) may like my servyse or me'; me [ne] lakketh but my deth (Chaucer, Compl. unto Pite 105) was turned into 'I lakke but my deth'.

3- The question we have to deal with is, therefore, a most interesting instance of case-shifting. No Gernianic language