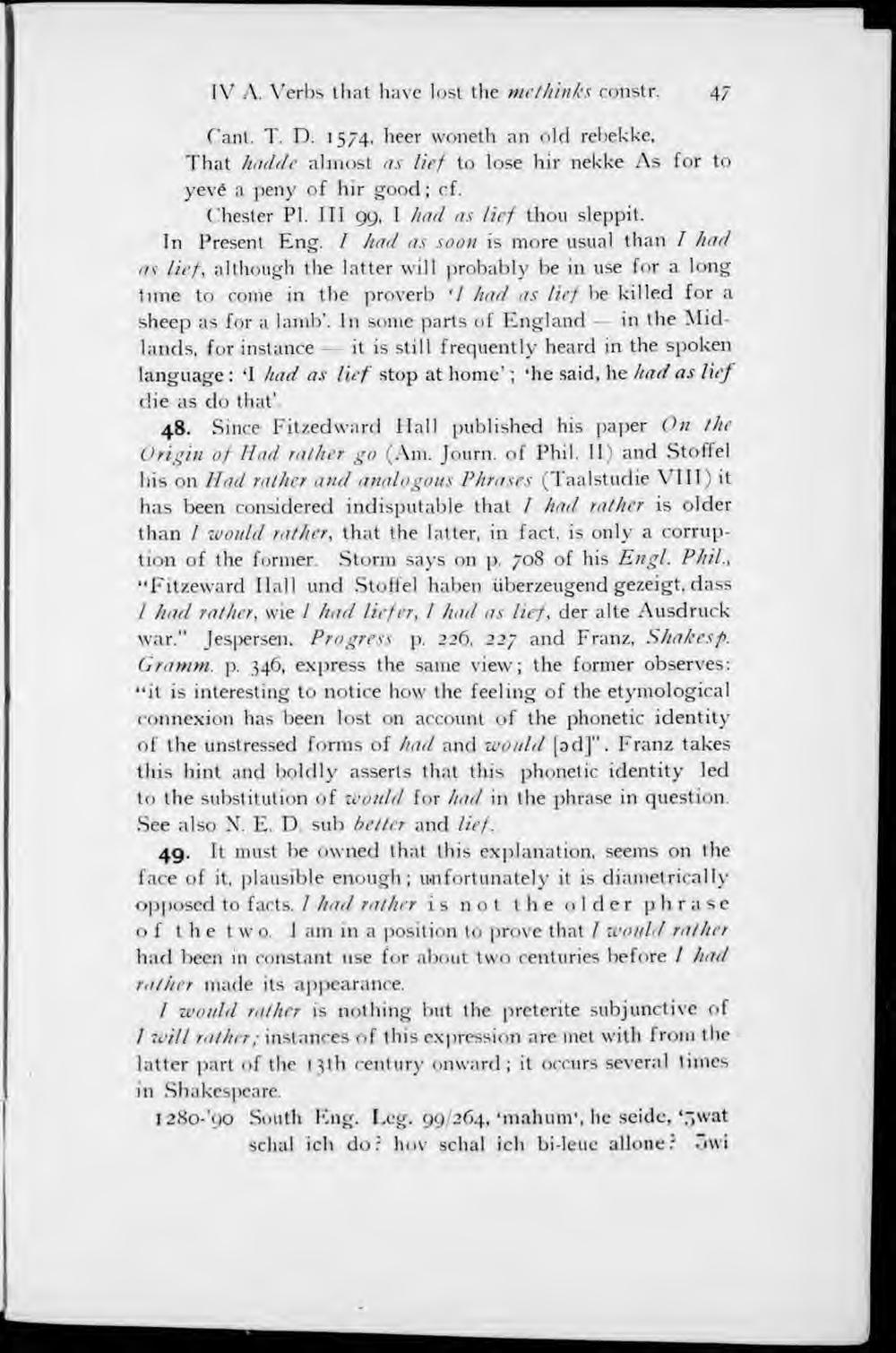 That had.de almost as lief to lose hir nekke As for to yevé a peny of hir good; cf.

Chester PI. III 99, I had as lief thou sleppit.

In Present Eng. I had as soon is more usual than 1 had as lief, although the latter vvill probably be in use for a long time to come in the proverb 'I had as lief be killed for a sheep as for a lamb'. In some parts of England — in the Midlands, for instance — it is still frequently heard in the spoken language : 'I had as lief stop at home'; 'he said, he had as lief die as do that'.

48. Si nee Fitzedward Hall published his paper On the Origin of Had ralher go (Am. Journ. of Phil. II) and Stoffel his on Had rather and analogous Phrases (Taalstudie VIII) it has been considered indisputable that I had rather is older than / would rather, that the latter, in fact, is only a corruption of the former. Storm says on p. 708 of his Engl. Phil., "Fitzevvard Ilall und Stoffel haben überzeugend gezeigt, dass I had rather, wie I had liefer, l had as lief, der alte Ausdruck war." Jespersen, Progress p. 226. 227 and Franz, Shakesp. Gratnm. p. 346, express the same view; the former observes: "it is interesting to notice how the feeling of the etymologica! connexion has been lost on account of the phonetic identity of the unstressed forms of had and would [ad]". Franz takes this hint and boldly asserts that this phonetic identity led to the substitution of woidd for had in the phrase in question. See also N. E. D. sub bet ter and lief.

49. It must be owned that this explanation, seems on the face of it, plausible enough; u-nfortunately it is diametrically opposed to facts. I had rather is not the older phrase of thetwo. I am in a position to prove that / would rather had been in constant use for about two centuries before l had rather made its appearance.

/ woidd rather is nothing but the preterite subjunctive of / will rather; instances of this expression are met with from the latter part of the 13th eentury onward ; it occurs several times in Shakespeare.