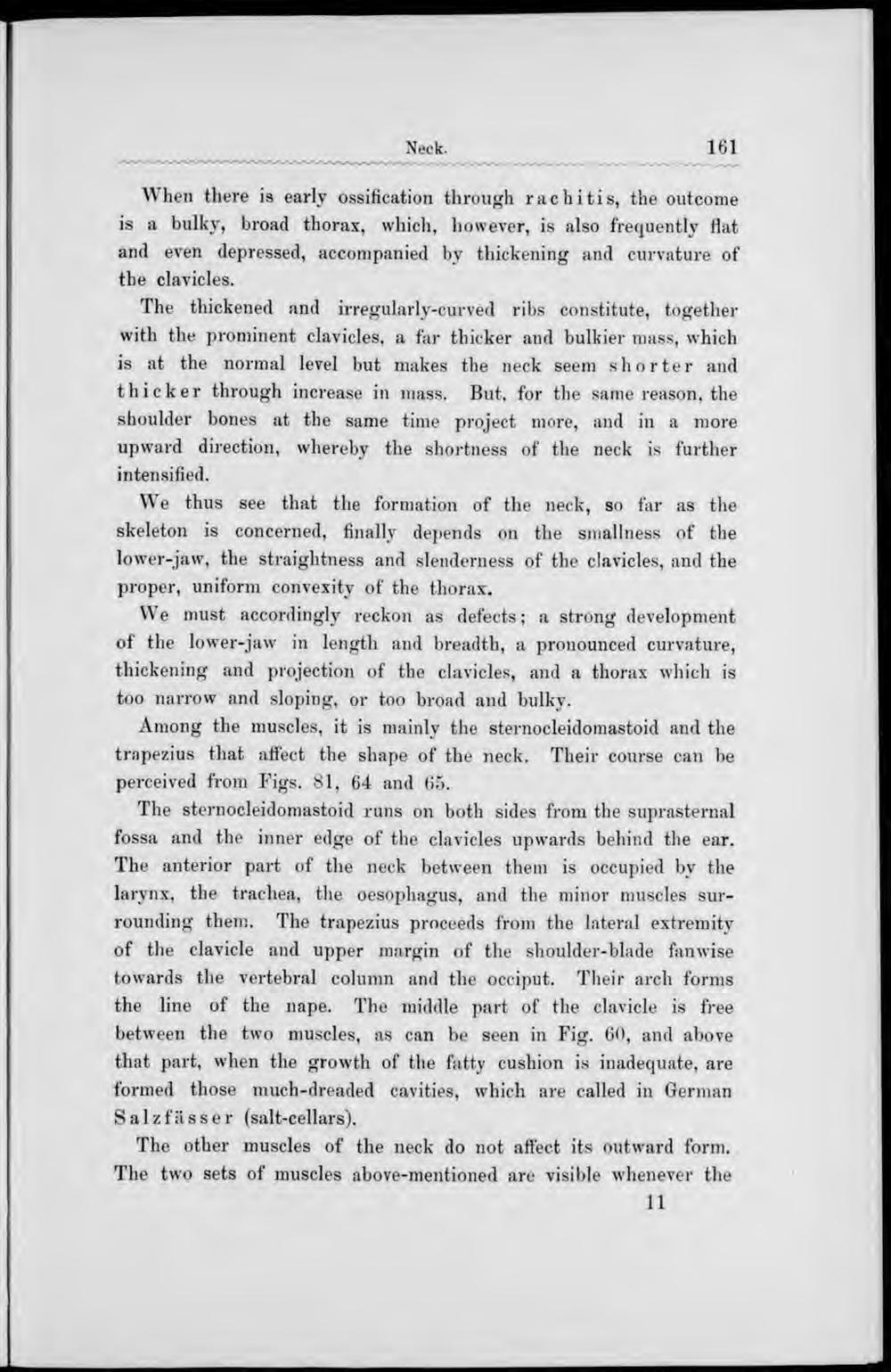 When there is early ossification through rachitis, the outcome is a bulky, broad thorax, which, however, is also frequently Hat and even depressed, accompanied by thickening and curvature of the clavicles.

The thickened and irregularly-curved ribs constitute, together with the prominent clavicles, a far thicker and buikier mass, which is at the normal level but makes the neck seem shorter and thicker through increase in mass. But, for the same reason, the shoulder bones at the same time project more, and in a more upward direction, vvhereby the shortness of the neck is further intensified.

We thus see that the formation of the neck, so far as the skeleton is concerned, finally depends on the smallness of the lower-jaw, the straightness and slenderness of the clavicles, and the proper, uniform convexity of the thorax.

We must accordingly reckon as defects; a strong development of' the lower-jaw in length and breadth, a pronounced curvature, thickening and projection of the clavicles, and a thorax which is too narrow and sloping, or too broad and bulky.

Among the muscles, it is mainly the sternocleidomastoid and the trapezius that affect the shape of the neck. Their course can be perceived from Figs. 81, 64 and 65.

The sternocleidomastoid runs on both sides from the suprasternal fossa and the inner edge of the clavicles upwards behind the ear. The anterior part of the neck betvveen them is occupied by the larynx, the trachea, the oesophagus, and the minor muscles surrounding them. The trapezius proceeds from the lateral extremity of the clavicle and upper margin of the shoulder-blade fanwise towards the vertebral column and the occiput. Their arch forms the line of the nape. The middle part of the clavicle is free between the two muscles, as can be seen in Fig. 60, and above that part, when the growth of the fatty cushion is inadequate, are formed those much-dreaded cavities, which are called in German Salzfiisser (salt-cellars).

The other muscles of the neck do not alfect its outward form. The two sets of muscles above-mentioned are visible whenever the