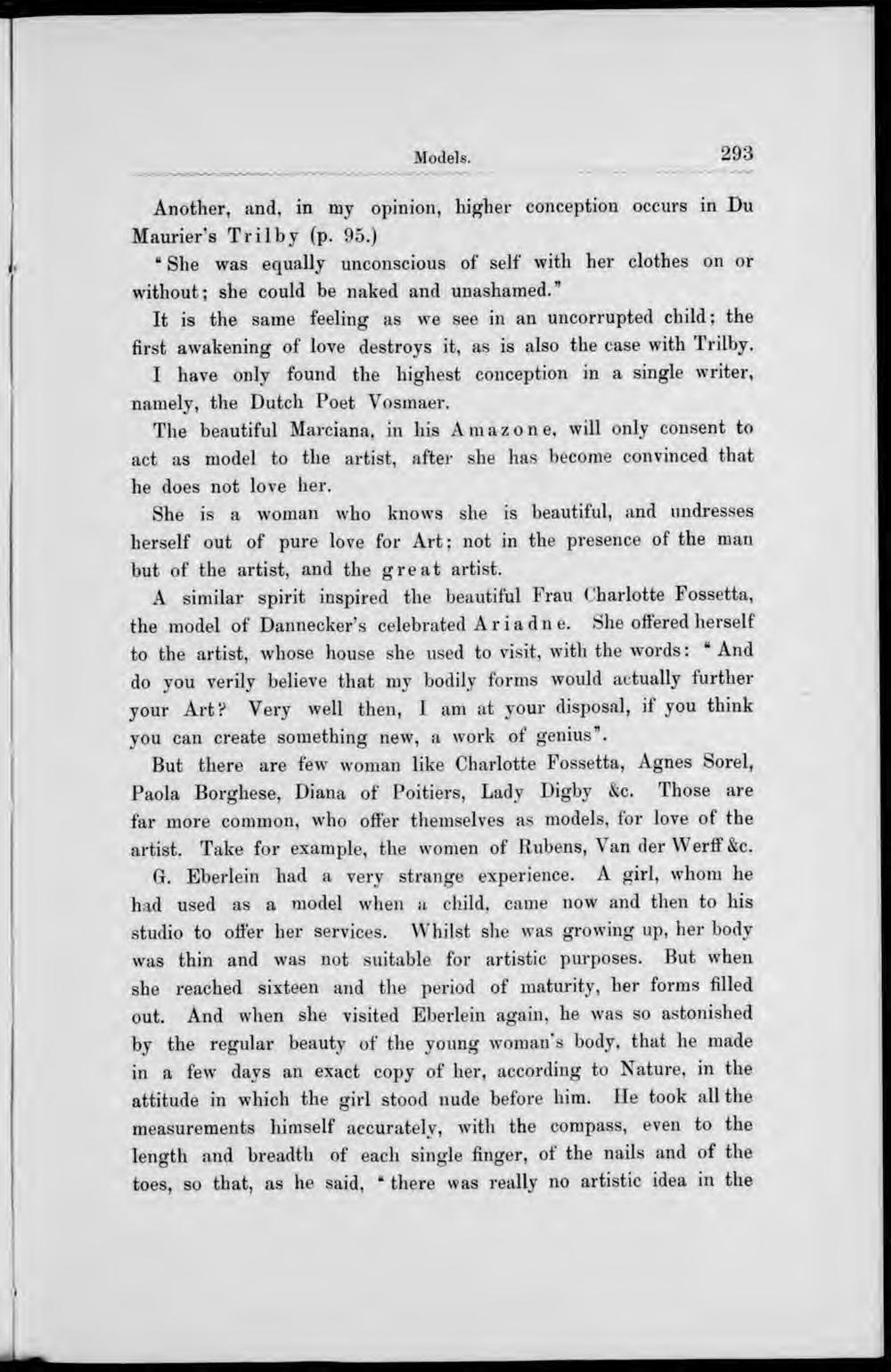 Another, and, in my opinion, higher conception occurs in Du Maurier's Trilby (p. 95.)

* She was equally unconscious of self with her clothes on or without; she could be naked and unashamed."

It is the same feeling as we see in an uncorrupted child; the first awakening of love destroys it, as is also the case with Trilby.

I have onlv found the highest conception in a single writer, namely, the Dutch Poet Vosmaer.

The beautiful Marciana, in bis Amazone, will only consent to act as model to the artist, after she lias become convinced that lie does not love her.

She is a woman who knows she is beautiful, and undresses herself out of pure love for Art; not in the presence of the man but of the artist, and the great artist.

A similar spirit inspired the beautiful Frau Charlotte Fossetta, the model of Dannecker's celebrated A r i a d n e. She ofïered herself to the artist, whose house she used to visit, with the words: * And do you verily believe that my bodily forms would actually further your Art? Very well then, I am at your disposal, if you think you can create something new, a work of genius".

But there are few woman like Charlotte Fossetta, Agnes Sorel, Paola Borghese, Diana of Poitiers, Lady Digby &c. Those are far more common, who offer themselves as models, for love of the artist. Take for example, the women of Rubens, \ an der Werff &c.

G. Eberlein had a very strange experience. A girl, whom he had used as a model when a child, came now and then to his studio to offer her services. Whilst she was growing up, her body was thin and was not suitable for artistic purposes. But when she reached sixteen and the period of maturity, her forms filled out. And when she visited Eberlein again, he was so astonished by the regular beauty of the young woman's body, that he made in a few days an exact copy of her, according to Nature, in the attitude in which the girl stood nude before him. He took all the measurements himself accuratelv, with the compass, even to the length and breadth of each single finger, of the nails and of the toes, so that, as he said, " there was really no artistic idea in the