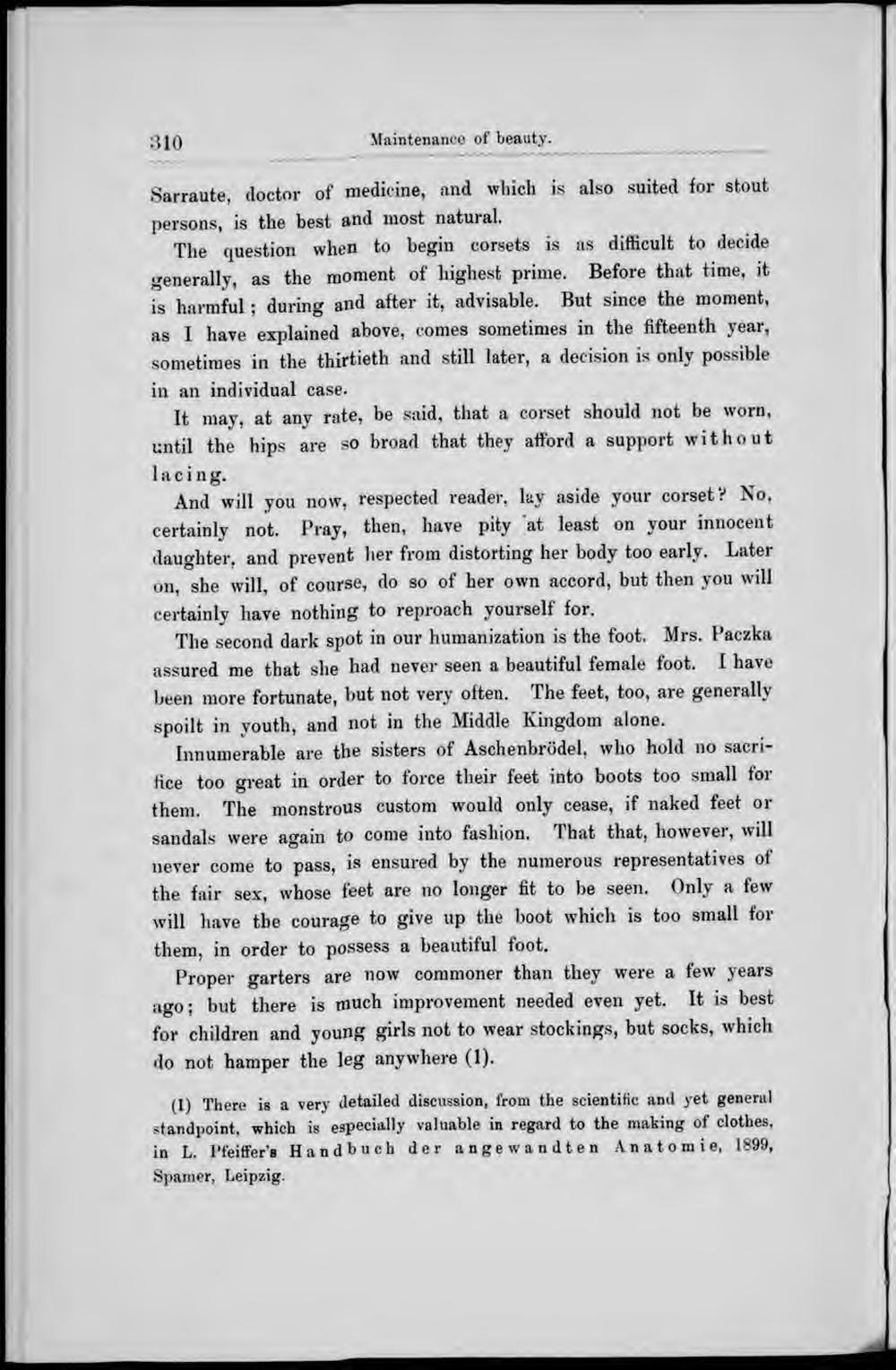 Sarraute, doctor of medieine, and wbich is also suited for stout persons, is the best and most natural.

The question when to begin corsets is as difficult to decide generally, as the moment of highest prime. Before that time, ït is harmful ; during and after it, advisable. But since the moment, as I have explained above, comes sometimes in the fifteenth year, sometimes in the thirtieth and still later, a decision is only possible

in an individual case.

It may, at any rate, be said, that a corset should not be worn, until the hips are so broad that they afford a support without laci ng.

And will you now, respected reader, lay aside your corset V No, certainlv not. Pray, then, have pity at least on your innocent daughter. and prevent her from distorting her body too early. Later on, she will, of course, do so of her own accord, but then you will certainly have nothing to reproach youi'self for.

The second dark spot in our humanization is the foot. Mrs. Paczka assured me that she had never seen a beautiful female foot. I have been more fortunate, but not very often. The feet, too, are generally spoilt in vouth, and not in the Middle Kingdom alone.

Innumerable are the sisters of Aschenbrüdel, who hold no sacritice too great in order to force their feet into boots too sniall for them. The monstrous custom would only cease, if naked feet or sandals were again to come into faslnon. That that, however, will never come to pass, is ensured by the numerous representatives of the fair sex, whose feet are no longer fit to be seen. Only a few will have the courage to give up the boot which is too small for them, in order to possess a beautiful foot.

Proper garters are now commoner than they were a few years ago; but there is much improvement needed even yet. It is best for children and young girls not to wear stockings, but soeks, which do not hamper the leg anywhere (1).

(1) There is a very detailed discussion, from the scientific and yet general standpoint, which is especially valuable in regard to the making of clothes, in L. Pfeiffer's Handbuch der angewandten Anatomie, 1899, Spanier, Leipzig.