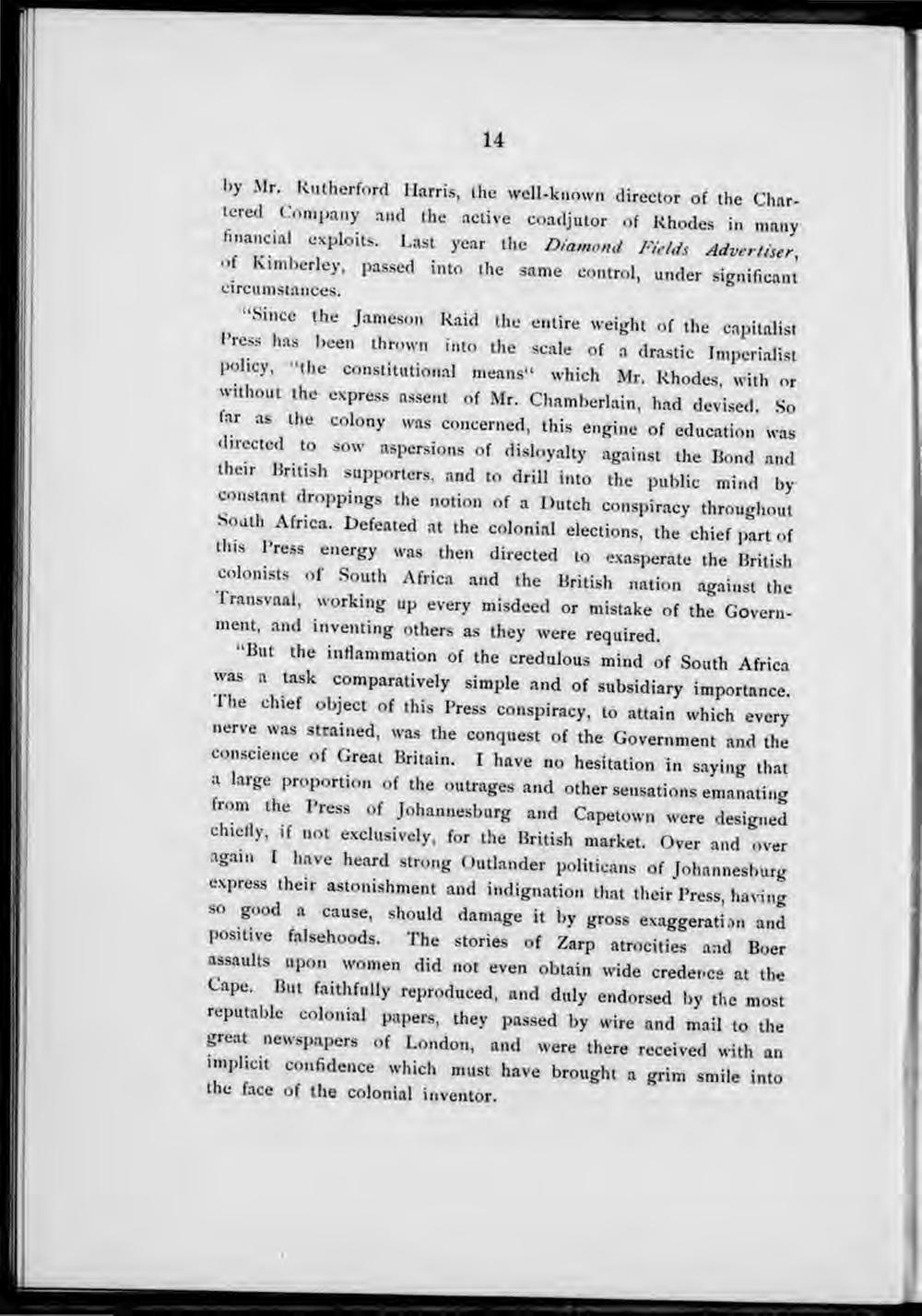 by Mr. Rutherford Harris, the well-known director of the Chartered Company and the active coadjutor of Khodes in many financial exploits. Last year the Diamond Fields Advertiser, of Kimberley, passed into the same control, under significant circumstances.

"Since the Jameson Raid the entire weight of the capitalist ress has been thrown into the scale of a drastic Imperialist P° "the collstitl"ional means" which Mr. Rhodes with or without the express assent of Mr. Chamberlain, had devised. So ar as the colony was concerned, this engine of education was directed to sow aspersions of disloyalty against the Bond and 1!ntlsh suPP°rters, and to drill into the public mind by constant droppings the notion of a Dutch conspiracy throughout *outh Africa. Defeated at the colonial elections, the chief part of t 1>ress enersy was 'hen directed to exasperate the British colonists of South Africa and the British nation against the 1 ransvaal, working up every misdeed or mistake of the Government, and inventing others as they were required.

"But the mflammation of the credulous mind of South Africa was a task comparatively simple and of subsidiary importance.

ie chief object of this Press conspiracy, to attain which every nerve was strained, was the conquest of the Government and the consc.ence of Great Britain. I have no hesitation in saying that a large proportion of the outrages and other sensations emanating from the Press of Johannesburg and Capetown were designed Chiefly, ,f n„t exclusively, for the British market. Over and over again I have heard strong Outlander politicans of Johannesburg express their astonishment and indignation that their Press, having so good a cause, should damage it by gross exaggerati Dn and positive falsehoods. The stories of Zarp atrocities and Boer assaults upon women did not even obtain wide crederce at the Cape. But faithfully reproduced, and duly endorsed by the most reputable colonial papers, they passed by wire and mail to the great newspapers of London, and were there received with an implicit confidence which must have brought a grim smile into the face of the colonial inventor.