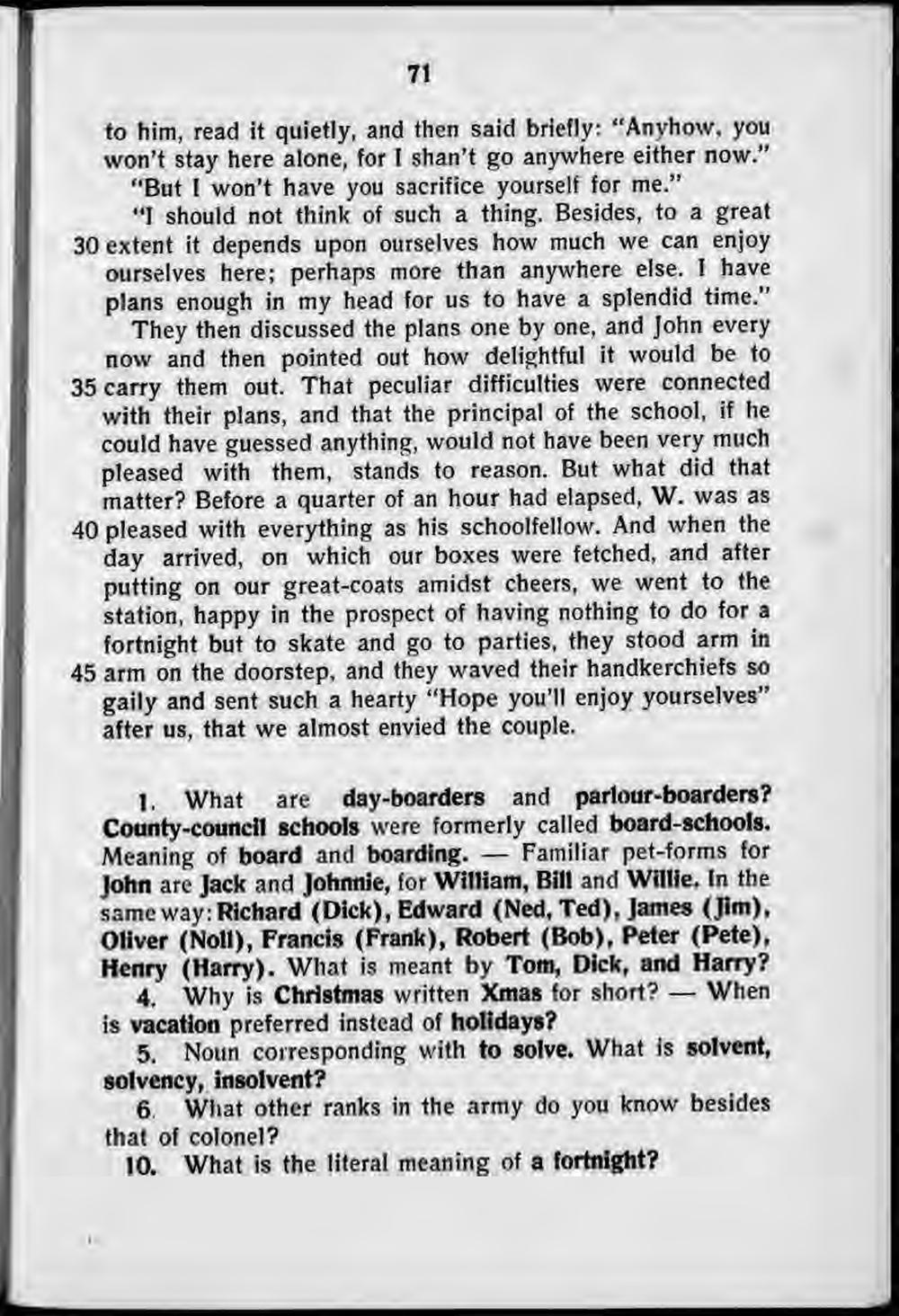 to him, read it quietly, and then said briefly: "Anyhow, you won't stay here alone, for I shan't go anywhere either now."

"But I won't have you sacrifice yourself for me."

"I should not think of such a thing. Besides, to a great 30 extent it depends upon ourselves how much we can enjoy ourselves here; perhaps more than anywhere else. I have plans enough in my head for us to have a splendid time."

They then discussed the plans one by one, and John every now and then pointed out how delightful it would be to 35 carry them out. That peculiar difficulties were connected with their plans, and that the principal of the school, if he could have guessed anything, would not have been very much pleased with them, stands to reason. But what did that matter? Before a quarter of an hour had elapsed, W. was as 40 pleased with everything as his schoolfellow. And when the day arrived, on which our boxes were fetched, and after putting on our great-coats amidst cheers, we went to the station, happy in the prospect of having nothing to do for a fortnight but to skate and go to parties, they stood arm in 45 arm on the doorstep, and they waved their handkerchiefs so gaily and sent such a hearty "Hope you'11 enjoy yourselves" after us, that we almost envied the couple.

1. What are day-boarders and parlour-boarders? County-councü schools were formerly called board-schools. Meaning of board and boarding. — Familiar pet-forms for John are Jack and Johnnie, for William, Bill and Willie. In the sameway:Richard (Dick), Edward (Ned, Ted), James (Jim), Oliver (Noll), Francis (Frank), Robert (Bob), Peter (Pete), Henry (Harry). What is meant by Tom, Dick, and Harry?

4. Why is Christmas written Xmas for short? — When is vacation preferred instead of holidays?

5. Noun corresponding with to solve. What is solvent, solvency, insolvent?

6. What other ranks in the army do you know besides that of colonel?

10. What is the literal meaning of a fortnight?