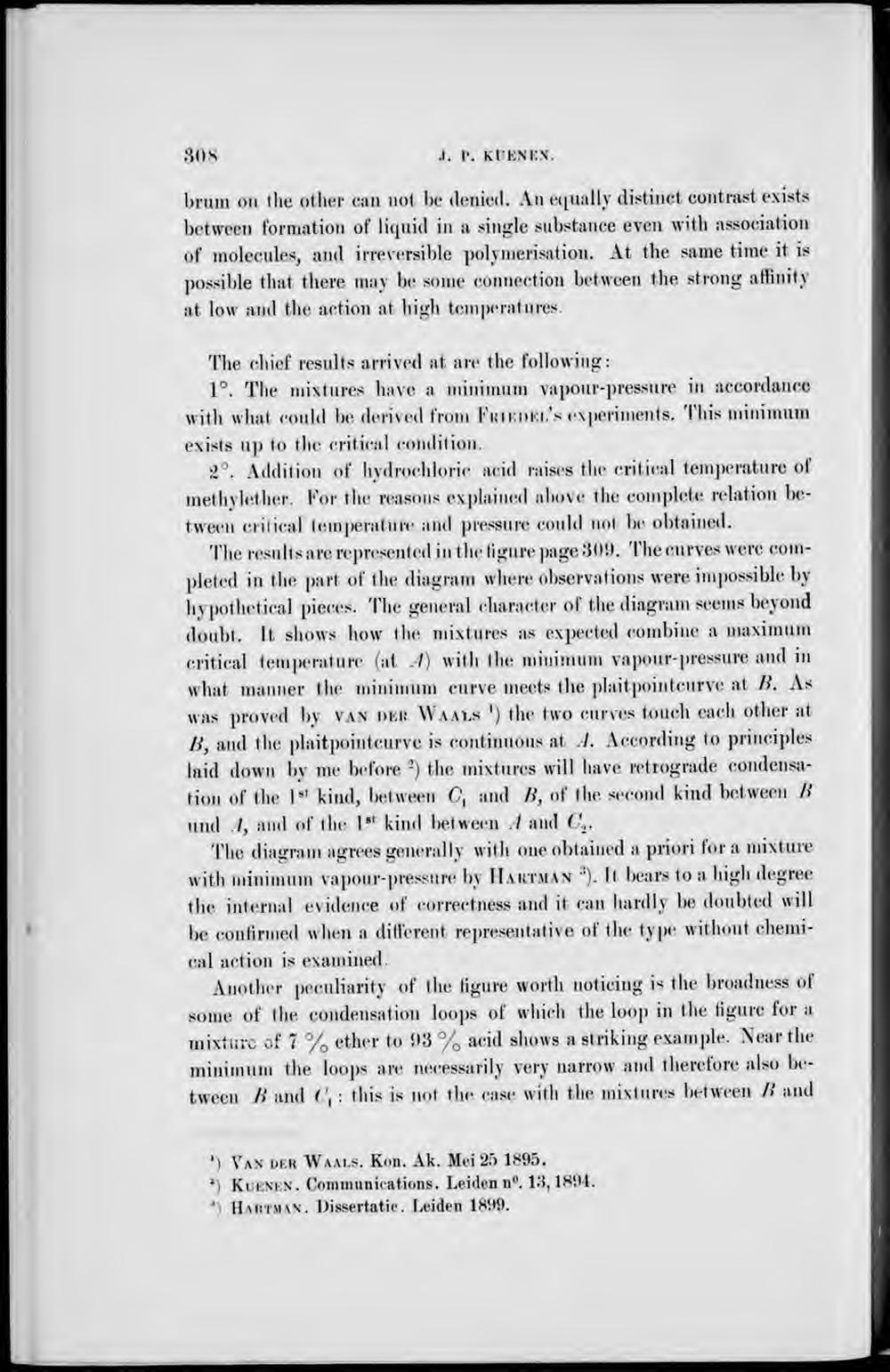 bruin 011 the otlier can not be denied. An equallv distinct contrast exists between formation of liquid in a single substance even with association of molecules, and irreversible polymerisation. At the same time it is possible that tbere muy be some connection between the strong affinity at low and the action at high temperaturen

The chief results arrived at are the following:

1°. The mixtures have a minimum vapour-pressure in accordance with wliat could l)e derived front I'iuiidki.'s experinients. I liis minimum exists ii]) to llie critica! condition.

ï>°. Addition of liydrochloric acid raises the critical temperature of inethvlether. Kor the reasons explained above the complete relation between crilical te,mperatnrc and pressure could not bc obtained.

The results are represented in the tigure page 30!). The curves were coinpleted in the part of the diagram where observations were impossible by hypothetical pieces. The general character of the diagram seeitis bevond doubt. It shows liovv the mixtures as expected combine a maximum critical temperature (al .-/) with the minimum vapour-pressure and in what marnier the minimum curve meets tbe plaitpointcurve at li. As was proved by van dei» Waals ') the two curves touch each otlier at H, and the plaitpointcurve is continuous at t. According to principles laid down by me bcfore 3) the mixtures will have retrograde condensation of the l8t kind, between C, and li, of the second kind between li uiul I, and of the 1" kind between A and C.,.

The diagram agrees general ly with one obtained a priori fora mixture with minimum vapour-pressure by Hartman "). It bears to a high degree the internal evidence of correctness and it can hardly be doubted will be confirmed wlien a different representative ot the type without cliemical action is examined.

Auother peculiarity of the tigure worth noticiug i< the broadness of some of the condensation loops of which the loop in the tigure for a mixture of 7 % ether to 93 % acid shows a striking example. Near the minimum the loops are uecessanly very narrow and theretore also between B and (\ : tliis is not the case with the mixtures between />' and