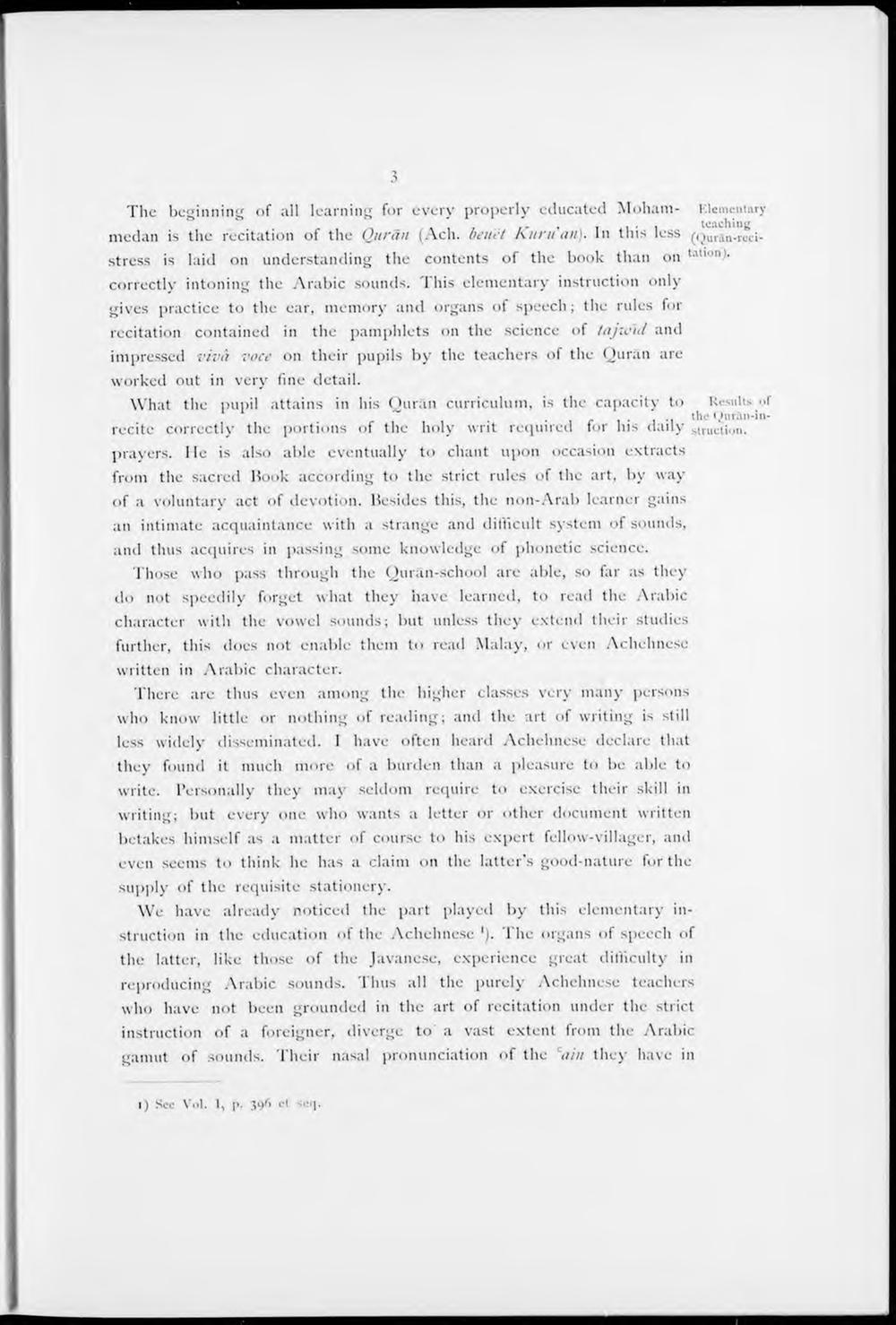 The beginning of all learning for cvcry properly educated Moham- Elementary

medan is the recitation of the Quran (Ach. beuct Kurii au). In this less (QUrsn-recistress is laid 011 understanding the contents of the book than 011 uuon> correctly intoning the Arabic sounds. This elementary instruction only gives practice to the ear, memory and organs of speech ; the rules for recitation contained in the pamphlets on the science of tajiu'ul and impressed vivïi voce 011 their pupils by the teachers of the Quran are worked out in very fine detail.

What the pupil attains in his Quran curriculum, is the capacity to Results c

recite correctly the portions of the holy writ required for his daily simctiun. prayers. He is also able eventually to chant upon occasion extracts from the sacred Book according to the strict rules of the art, by way of a voluntary act of devotion. Besides this, the non-Arab learner gains an intimate acquaintance with a strange and difficult system of sounds,

and thus acquires in passing some knowledge of phonetic science.

Those who pass through the Quran-school are able, so far as tliey do not speedily forget what they have learned, to read the Arabic character with the vowel sounds; but unless they extend their studies further, this does not enable them to read Malay, or even Achehnese written in Arabic character.

Therc are thus even among the higher classes very many persons who know little or notliing of reading; and the art of writing is still less widely disseminated. I have often heard Achehnese declare that they found it much more of a burden than a pleasure to be able to write. Personally they may seldom require to exercise their skill in writing; but every one who wants a letter or other document written betakes himself as a matter of course to his expert fellow-villager, and even seems to think he lias a claim 011 the latter's good-nature for the supply of the requisite stationery.

We have already noticed the part played by this elementary instruction in the education of the Achehnese '). The organs of speech of the latter, like those of the Javancse, experience great difficulty in reproducing Arabic sounds. 1 luts all the purely Achehnese teachers who have not been grounded in the art of recitation under the strict instruction of a foreigner, divergc to' a vast extent from the Arabic gamut of sounds. Their nasal pronunciation of the caiu they have in