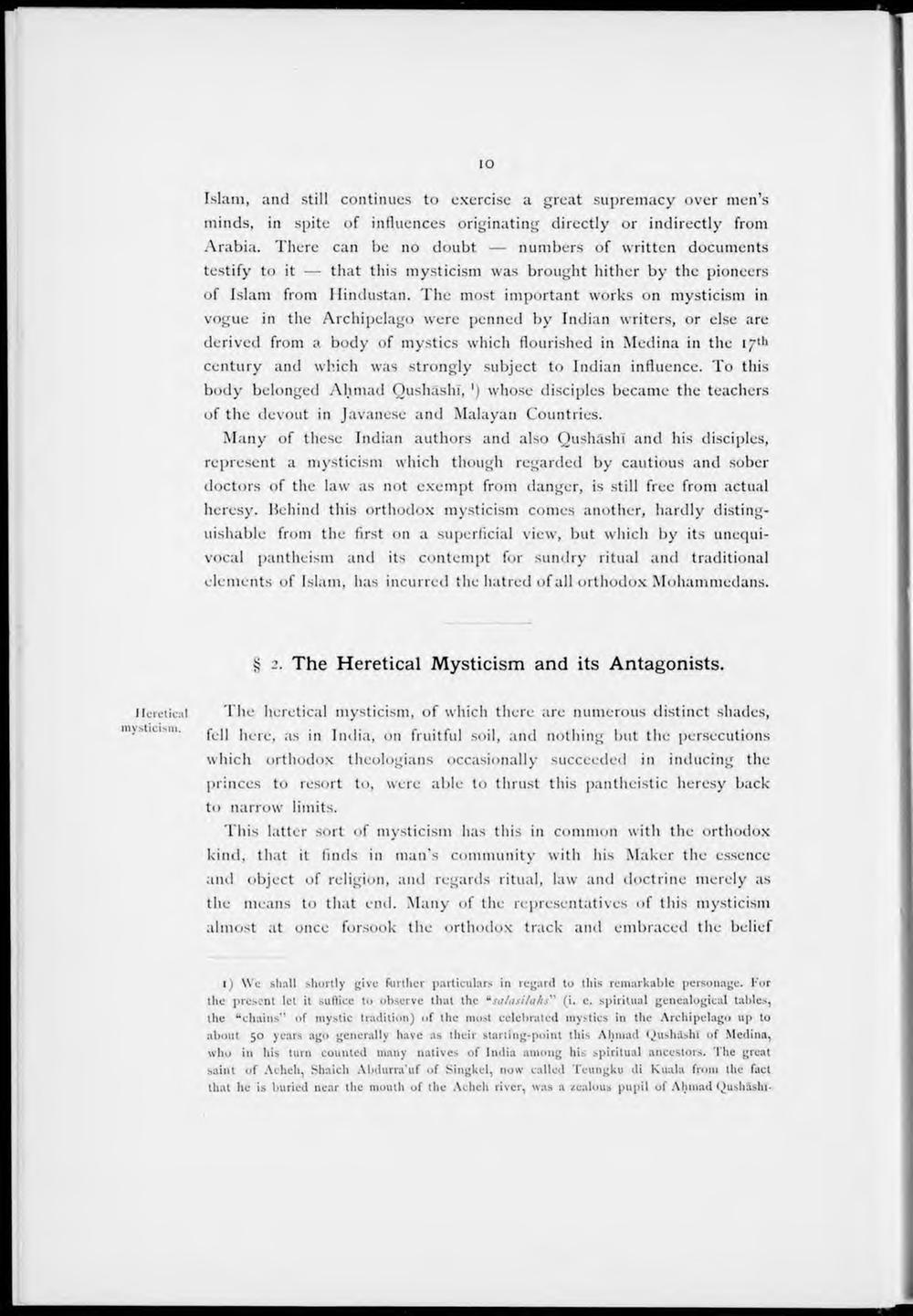 Islam, and still continues to cxercisc a great supremacy over men's minds, in spite of influences originating dircctly or indirectly from Arabia. Therc can be 110 doubt — numbers of writtcn documents testify to it — that this mysticism was brought hither by the pioneers of Islam from Hindustan. The most important works on mysticism in vogue in the Archipelago were penned by Indian writers, or else are derived from a body of mystics which flourished in Medina in the I7th century and which was strongly subject to Indian influence. To this body belonged Ahmad QushashI, ') whose disciples became the teachers of the devout in Javanese and Malayan Countries.

Many of these Indian authors and also QushashI and his disciples, represent a mysticism which though regarded by cautious and sober doctors of the law as not exempt from danger, is still free from actual heresy. Behind this orthodox mysticism comes another, hardly distinguishable from the first on a superficial view, but which by its unequivocal pantheism and its contempt for sundry ritual and traditional elements of Islam, lias incurred the hatred of all orthodox Mohammcdans.

S 2. The Heretical Mysticism and its Antagonists.

11crctical The heretical mysticism, of which tliere are numerous distinct shades, ystiLism, ]lerC) as jn jntjja> 0I1 fruitful soil, and nothing but the persecutions

which orthodox theologians occasionally succeeded in inducing the princes to resort to, were able to thrust this pantheistic heresy back to narrovv limits.

This latter sort of mysticism has this in common with the orthodox kind, that it finds in man's community with his Maker the essence and object of religion, and regards ritual, law and doctrine merely as the means to that end. Many of the representatives of this mysticism almost at once forsook the orthodox track and embraced the belief

i) We shall shortly give further particulars in regard to this remarkable personage. For the present let it suftice to observe that the usn/(isi/(i/is" (i. e. spiritual gencalogical tailles, the "chains" of mystie tradition) of the most eclebrated mystics in the Archipelago up to about 50 years ago generally have as thcir starting-point this Ahmad Oushashï of Medina, who in his turn counted many natives of India among his spiritual ancestors. The great saint of Acheh, Shaich Abdurra'uf of Singkel, now callcd Teungku di Kuala from the fact that he is buried near the mouth of the Acheh river, was a zcalous pupil of Ahmad QushashI-