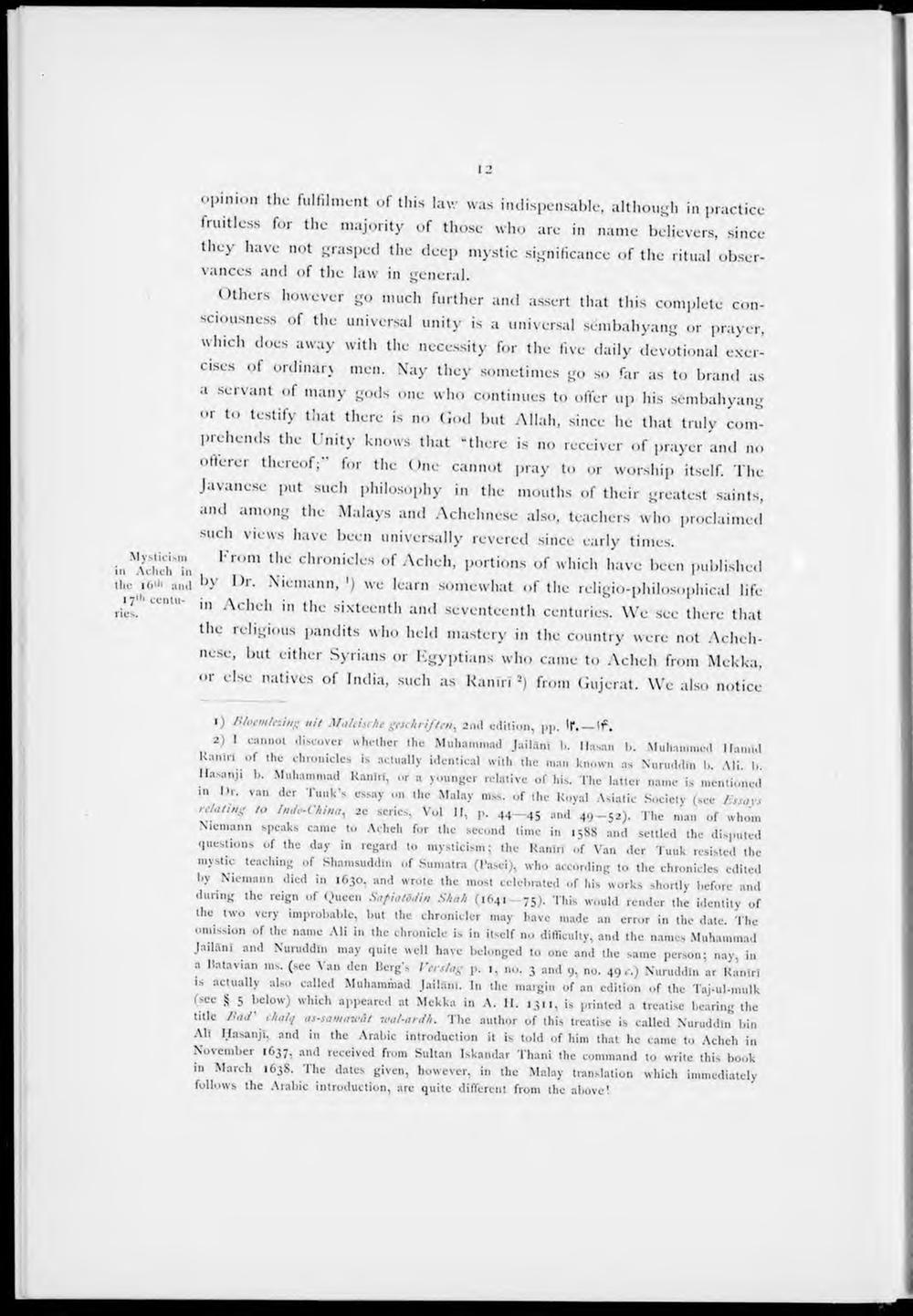 opinion the fulfilment of this law was indispensable, although in practice fruitless for the majonty of thosc who are in name believers, since tliey have not grasped the deep mystic significance of the ritual observances and of the law in general.

Others however go much further and assert that this complete consciousness of the universal unity is a universal sembahyang or prayer, which does away with the necessity for the five daily devotional exercises of ordinar\ men. Nay they sometimes go so far as to brand as a servant of many gods one who continues to offer up his sembahyang or to testify that there is no God but Allah, since he that truly comprehends the Unity knows that "there is no receiver of prayer and no ofterer thereof;" for the One cannot pray to or worship itself. The Javanese put such philosophy in the mouths of their greatest saints, and among the Malays and Achehnese also, teachers who proclaimed such views have been universally revered since early times.

inMAchchSTn Fr°m th.° chronicIcs of Achdl' portions of which have been published the ió'h and lj>' 1 )r- Nicmann, ') we learn somewhat of the religio-philosophical life rics. 1,1 Acheh '» the sixteenth and seventeenth centuries. Wc sec there that

the religious pandits who held mastery in the country were not Achehnese, but either Syrians or Egyptians who came to Acheh from Mekka, or cl se natives of India, such as Ranïrï2) from Gujcrat. We also notice

2) I cannot discover whether the Muhammad Jailanï h. Ilasan 1,. Muhammed Hamid Ranïrï of the chronicles is actually identieal with the man known as Nuruddïn b. Ali. I>. Hasanji b. Muhammad Ranïrï, or a younger relative of his. The latter name is mentioncd in I)r. van der Tuuk's essay on the Malay mss. of the Royal Asiatic Society (sec Essays relating to hnio-China, 2e series, Vol II, p. 44-45 and 49-52). The man of whom N.emann spcaks came to Acheh for the second time in 1588 and settled the disputed questions of the day in regard to mysticism; the Ranïrï of Van der Tuuk resisted the mystic teaching of Shamsuddïn of Sumatra (Pasei), who according to the chronicles cdited l.y Nicmann died in 1630, and wrote the most celebrated of his works shortly before and during the reign of Queen Safiatddin Shah (1641—75). This would render the identity of the two very improbable, but the chronicler may have made an error in the date. The omission of the name Ali in the chronicle is in itself no difficulty, and the names Muhammad Jailanï and Nuruddïn may quite well have belonged to one and the same person; nay, in a Hatavian ins. (sec Van den IScrg's Verslag p. 1, no. 3 and 9, no. 49 c.) Nuruddïn ar Ranïrï is actually also called Muhammad Jailanï. In the margin of an cdition of the Taj-ul-mulk (sec § 5 below) which appeared at Mekka in A. II. 1311, is printed a trcatise bearing the title Had ehalq as-samawat wal-ardh. The author of this treatise is called Nuruddïn bin Al' Hasanji, and in the Arabic introduction it is told of him that he came to Acheh in November 1637, and received from Sultan Iskandar Thani the command to write this book 111 March 163S. The dates given, however, in the Malay translation which immcdiately follows the Arabic introduction, are quite different from the above!