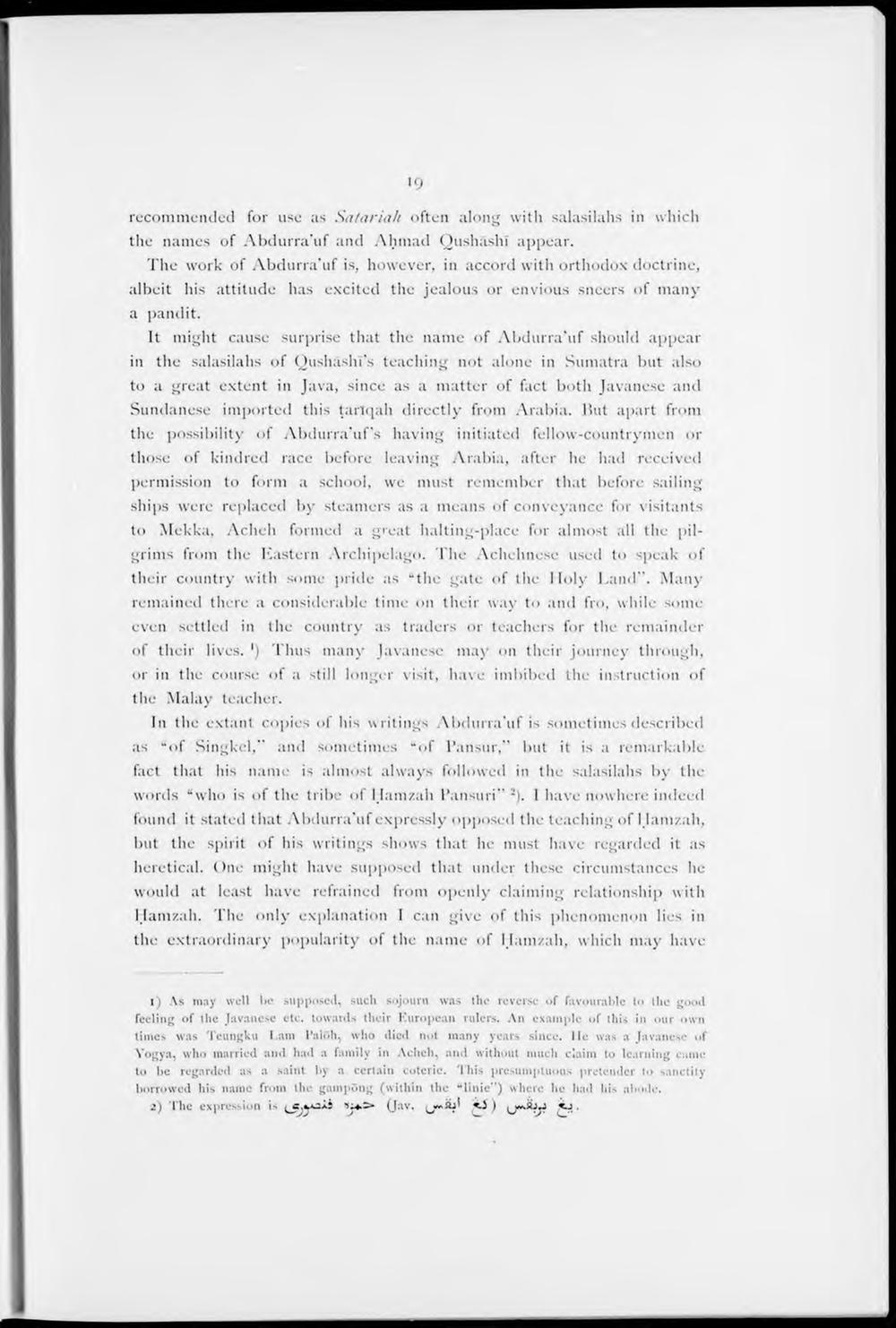 The work of Abdurra'uf is, however, in accord with orthodox doctrine, albeit his attitude lias excited the jealous or envious sneers of many a pandit.

It might cause surprise that the name of Abdurra'uf should appear in the salasilahs of QushashI's teaching not alone in Sumatra but also to a great extent in Java, since as a matter of fact both Javanese and Sundanese imported this tarlqah directly from Arabia. But apart from the possibility of Abdurra'uf's having initiated fellow-countrymen or those of kindred race before leaving Arabia, after lie had received permission to form a school, we must remember that before sailing ships were replaced by steamers as a means of conveyance for visitants to Mekka, Acheh formed a great halting-place for almost all the pilgrims from the Kastern Archipelago. The Achehnese used to speak of their country with some pride as "the gate of the Holy Land". Many remained tliere a considerable time on their way to and fro, while some even settled in the country as trailers or teachers for the remainder of their lives. ') Thus many Javanese may on their journey through, or in the course of a still longer visit, have imbibed the instruction of the Malay teacher.

In the extant copies of his writings Abdurra'uf is sometimes described as "of Singkel," and sometimes "of Pansur," but it is a remarkable fact that his name is almost always followed in the salasilahs by the words "who is of the tribe of Hamzah Pansuri" 2). I have nowhere indeed found it stated that Abdurra'uf expressly opposed the teaching of Ham/ah, but the spirit of his writings shows that he must have regarded it as heretical. One might have supposed that under tliese circumstances he would at least have refrained from openly claiming relationship with Hamzah. The only explanation I can give of this phenomenon lies in the extraordinary popularity of the name of Hamzah, which may have

1) As may well be supposed, such sojourn was the reverse of favourable to the good feeling of the Javanese etc. towards their Kuropean rulers. An example of this in our own times was Teungku Lam Paiöh, who died not many years since. He was a Javanese of Yogya, who married and had a family in Acheh, and without much claim to learning cume to be regarded as a saint by a eertain coterie. This presumptuous pretender to sanetity borrowed his name from the gampöng (within the "linie1') where he had his abode.