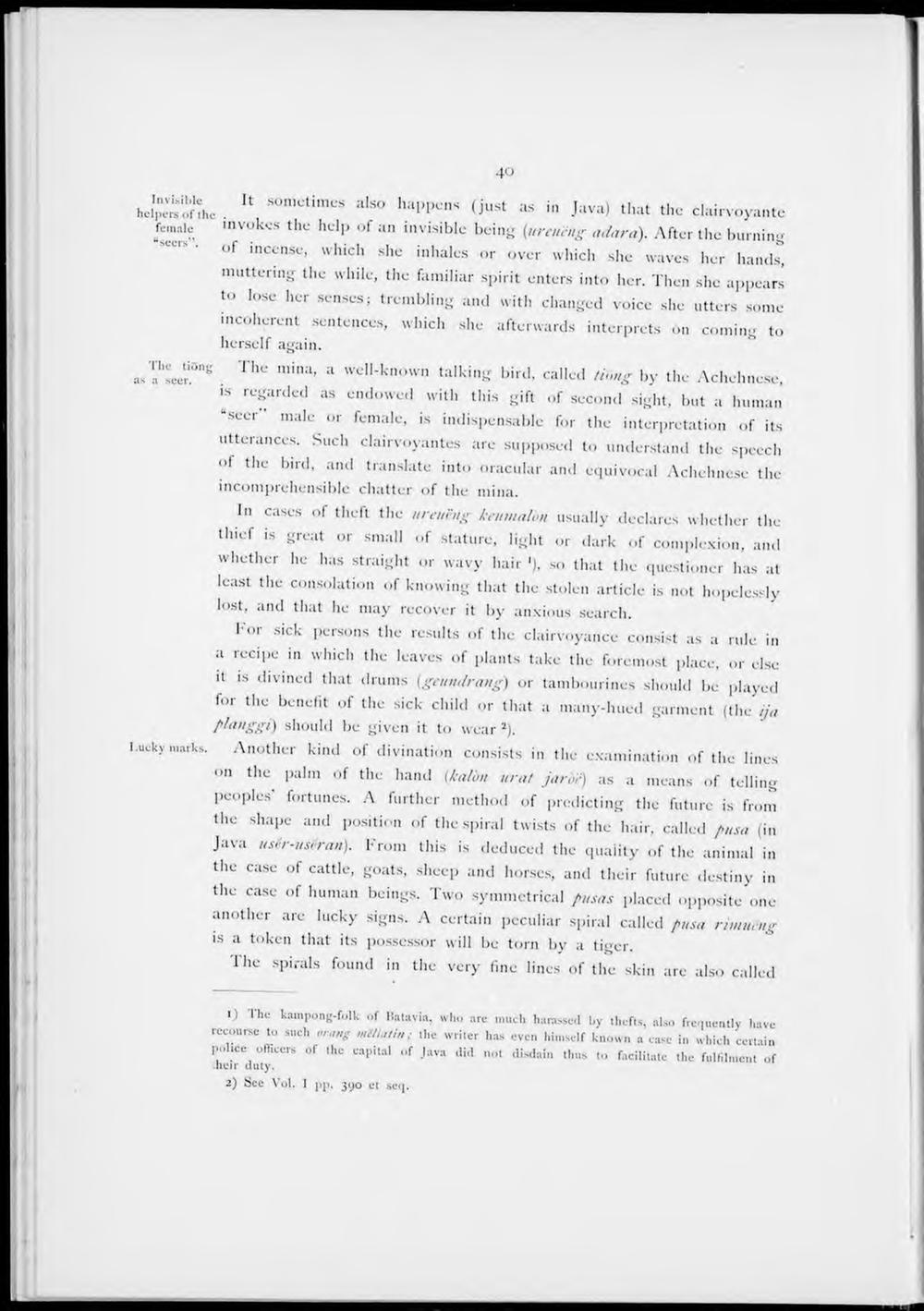 helpers of the . " SOmut,nM!S a,S° H»*» (J«* » i» H that the clairvoyante female mvokes the help of an invisible being (ureueng adara). After the burning

of ïncense, which she inhales or over which slie waves her hands, muttering the while, the familiar spirit enters into her. Then she appears to lose her senses; trembling and with changed voice she utters some incoherent sentences, which she afterwards interprets on coming to herself again.

as a'secr'.""" 1 'le "1,na' a wcII'known talking bird, called tiong by the Achehnese, is regarded as endowed with this gift of second sight, b«t a human "seer male or female, is indispensable for the interpretation of its utterances. Such clairvoyantes are supposed to understand the speech of the bird, and translate into oracular and equivocal Achehnese the incomprehensible chatter of the mina.

In cases of theft the ureuïng kcumalon usually declares whether the thief is great or small of stature, light or dark of complexion, and whether he lias straight or wavy liair '), so that the questioner lias at least the consolation of knowing that the stolen article is not hopelessly lost, and that he may recover it by anxious search.

For sick persons the results of the clairvoyance consist as a rule in a recipe in which the leaves of plants take the foremost place, or else it is divined that drums (geundrang) or tambourines should be played for the benefit of the sick cliild or that a many-hued garment (the ija planggi) should be given it to wear s).

l.uckymarks. Another kind of divination consists in the examination of the lines on the palm of the hand (kalbn urat ja roe) as a means of telling peoples' fortunes. A further n,etho<l of predicting the future is from the shape and position of the spiral twists of the hair, called pusa (in Java uscr-uscran). brom this is deduced the quaiity of the animal in the case of cattle, goats, sheep and horses, and their future destiny in the case of human beings. Two symmetrical pusas placed opposite one another are lucky signs. A certain peculiar spiral called pusa rit/meng is a token that its possessor vvill be torn by a tiger.

1) 1 he kampong-folk of Batavia, who are much harassed by thefts, also frequently have

recourse to such orang méliatin; the writer has even himself known a case in which certain

police oflicers of the capital of Java did not disdain thus to facilitate the fulfilment of hcjr ctuty.